When October 19th 2012 came and passed, fans of Community gave a deep sigh. Their favourite quirky television comedy had been set back which meant there would be no Christmas special, no Troy and Abed on the TV and no crazy Greendale happenings. Fortunately, 7th February 2013 brought season 4 of Community and the fans were happy again.

If you’ve never heard of Community, I personally recommend it which means this review is probably biased. After hearing about it while studying in Canada I thought, why not, what’s the worst it can do – except end on a cliffhanger and never return, I’m talking to you Heroes. Community, which just started its fourth season, centers around a study group at Greendale Community college. I know, I know, sounds boring and cliched and not funny at all. That’s where it gets exciting. The episodes are littered with cultural references – the Breakfast Club, Star Wars, Doctor Who – and my favourite pairing of Troy and Abed offer up so much weirdness that it makes you feel normal. There have been episodes about blanket forts, pillow forts, at least two episodes about paintballing, a World of Warcraft episode, a Law and Order episode, a video game episode…

I’m getting excited about it all over again. 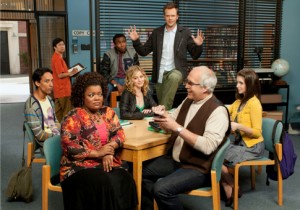 It’s true, now and then you get an episode which isn’t as funny as the rest but don’t you get that with every television show? Community offers something fresh, quirky, geeky and plain fun. With a diverse group including a possible Aspergers sufferer, a failed lawyer, an overachiever who once has a painkiller addiction, an ex-jock and a Dean who loves to dress up, the only thing missing is you watching it.

The big difference between season 3 and season 4 was that the show’s creator Dan Harmon was fired, losing his position as showrunner and executive producer. Initially there were reports that Harmon would return as a consultant but Harmon has stated that he is no longer involved in the creation of the show. This worried fans, would it still be geeky and creative without being too weird? Well, the new season has just passed episode 3. Episode 1 worried me, it seemed like it was trying too hard but episode 3, which also featured Matt Lucas, calmed me down and made me have a little more faith. I’m still curious to see where this season will go. Will the show be able to survive without Dan Harmon’s genius? I’m not sure. Will I be staying tuned to find out? Definitely.

Even if season 4 lets me down, the first 3 seasons have enough laughs in them to keep me going. I usually find it hard to re-watch episodes of a TV show but Community remains fresh and as funny as the first time you watched it.

I'm a movie lover of all genres, particularly comic book films, as well as some television shows such as Community. I enjoy fiction writing and blog writing and I sometimes dabble in reviews.
More Goodness
breakingcomedycommunity