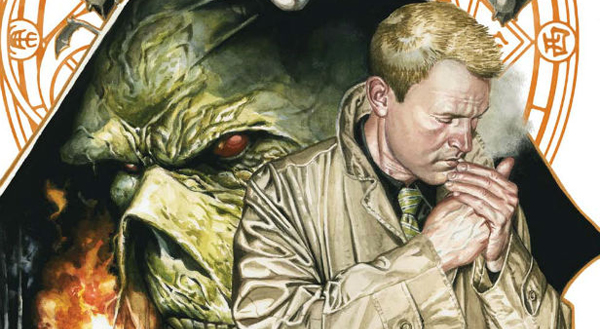 David Goyer executive producer of NBC’s new Constantine, which has just aired its second episode, has spoken about one of the things that Hellblazer fans have been speculating about, namely, whether Swamp Thing, the avatar of the Green who has a distinctly tangled history with John Constantine, will be appearing at some point.

If we were to do it, it’s a hard character to pull off, in terms of visual effects make-up.  We don’t have $10 million to do the CG.  We definitely wouldn’t see him in the first season.  If we’re fortunate enough to keep going and we feel like we can pull it off, that one requires a lot of creature design, so we need to make sure it doesn’t look dumb and is organic to the story.

Goyer’s honesty about how problematic portraying Swamp Thing on screen would be is refreshing. Whilst FX may have revolutionised the way comic derived characters, especially superheroes, can be realised on screen in film, doing the same on a TV budget will be distinctly more challenging. A digitally enhanced prosthetic suit would be a best of both worlds approach but context is the key.  Matt Ryan’s John Constantine meeting a poorly realised avatar of the Green would please nobody.

Andy Haigh started writing to counteract the brain atrophying effects of Retail Hell, now it's an addiction. Andy is an unrepentant sequential art absorbist and comics are one of his passions. Other interests include Film, Music, Science Fiction and Horror novels and quality TV like Game of Thrones. He can talk about these at great length if only someone would listen. He lives a somewhat hermit like life in The Shire, spends too much time on social media and is still waiting to go on an adventure.
More Goodness
ConstantineDavid GoyerFX