Gru, Margo, Edith, Agnes, Dr. Nefario and all the twinkie-lookalike minions return for the follow-up to the hugely successful 2010 movie Despicable Me, imaginatively titled Despicable Me 2.

“That’s right, baby!” Pierre Coffin and Chris Renaud return to direct the sequel to arguably one of my favourite kid’s movies next to Wreck-It Ralph. Despicable Me hit all the right notes for me – exceedingly funny, really heartfelt feel-good moments and some really original ideas – plus it gave the world Dave, Paul, Kenny and all the other bright yellow nonsense-talking minions that stole the movie.

So when I heard there was going to be a sequel, I hoped and prayed that they didn’t cock it up and screw over yet another franchise I liked… and thankfully it seems my prayers have been answered.

Fresh from his victory over Vector, Gru (Steve Carrell) has been getting used to life as a good guy, and a father. This brings such hazards as having to wear a dress, and dealing with other parents trying to set him up with complete train wrecks for a date, and worst of all… boys. 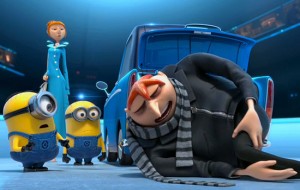 Just as he seems to be getting a handle on things, Gru is “recruited” into the “Ant-Villain League” or (AVL for short) by the rather eccentric AVL Agent Lucy played by Kirsten Wiig (who interestingly enough played the orphanage owner Miss Hattie from the first film). They wish to use Gru’s experience as a former bad guy to track down a new super criminal who’s stolen a rather volatile chemical from a research facility – though the actual theft was of the whole facility using a giant flying magnet ship.

Yes – the methodology utilised in Despicable Me 2 is still suitably bonkers, which is absolutely fine by me, and continues the lunacy we were introduced to in it’s predecessor.

Alongside his escapades helping the Anti-Villain League, Gru is also being an over-protective father and panicking over Margo (Miranda Cosgrove) and her new interest in boys, particularly the emo-haired Antonio (Moises Arias) who’s rather quickly managed to captivate her.

All the principal cast return for the follow-up, with Steve Carrell and Kirsten Wiig putting in decent performances as Gru and Lucy – the combination of characters makes for some great chemistry, what with Gru’s awkward bluntness and Lucy’s overt weirdness clashing, yet at the same time creating a great team.

Russell Brand is back as Dr Nefario, and Steve Coogan joins the cast as AVL director Silas Ramsbottom.

The tone and pace of the movie is spot on, and there’s rarely a lull in the action or comedy… there’s also some great use of music, which I won’t spoil as it’s hilarious. However speaking of music, the same theme music from the first film is used throughout too, which seems a little lazy/repetitive. 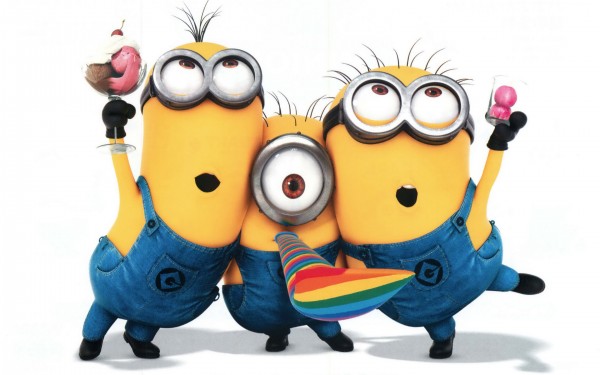 Yet again, the minions steal the show

The action in the movie is great too, to the point where I’m sure there’ll be a game adapted to tie-in to it… (there’s already an Android game, which I’ll be reviewing soon, but it’s not directly tied to the sequel).

When it came down to bits I didn’t like about the movie I ended up scratching my head trying to think about negatives for a fair while. After remembering what I loved about the first one, I realised that the villain in this movie isn’t as fun as Jason Segel’s Vector. This is no fault in character design or voice acting, but it’s down to the antagonist being a mystery until the final act. I say a mystery, but to be honest it’s pretty obvious from the off – to the point where my 7 year-old daughter pointed it out really early on.

Aside from my previous gripe about some over-used theme music, I have to say I really enjoyed the film, and I was laughing out loud for a fair few scenes (admittedly, nearly all involving the minions – I’m so glad they’re going to get their own spin-off movie!).

DM2 isn’t exactly a complicated film, and if you’re looking for surprises, you’ll be left wanting. If you’re expecting a fun, feel-food film with some good action and the comedic genius of the minions, then you’ll be happy. I wouldn’t say it’s as good as the first film, but it’s definitely worth a watch, and I’ll definitely be investing in the DVD/Blu Ray come Christmas time.

Movie and videogame geek, basketball player, guitarist, waffle connoisseur & expert in being a slacking bastard. You'll find me gaming on PS4 as "SpasmicPuppy" most of the time... I'm addicted to Destiny.
More Goodness
breakingDespicable MeDespicable Me 2