previous
Venom Spin-off is a go!
random
next
New Teaser Trailer for Dawn of the Planet of the Apes Shows Man's Weakness
Film and TV
0 likes

As a testament to the Dredd’s enduring and building popularity, which contrasts sharply with its poor box office performance, the film from Pete Travis and Alex Garland, which featured Karl Urban as the stoic future lawman in Mega City One, has won Amazon’s March Movie Madness tournament. The film beat numerous other critically acclaimed cinema classics in the fan voted contest before being declared winner of the competition on the Amazon Facebook page. 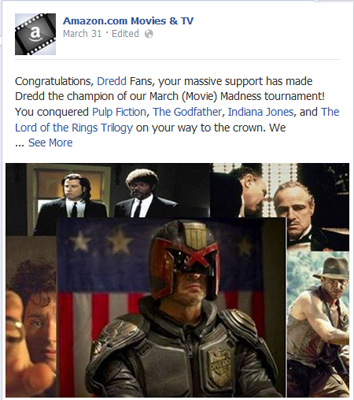 The film based on British anthology comic 2000AD’s most iconic character topped DVD, Blu-ray and download charts on release. Urban himself recently stated at Emerald City Comicon that he wasn’t happy with how the film was marketed for its theatrical release (watch the panel video here).

Soon after the plans of a proposed Dredd trilogy were cancelled due to the poor box office the Make A Dredd Sequel campaign started and shows no sign of slowing down with 100,000 signatures. In response to this Karl Urban recorded a special video message to fans of Dredd for their continued support on behalf of himself, Alex Garland and everyone at DNA Films.

Andy Haigh started writing to counteract the brain atrophying effects of Retail Hell, now it's an addiction. Andy is an unrepentant sequential art absorbist and comics are one of his passions. Other interests include Film, Music, Science Fiction and Horror novels and quality TV like Game of Thrones. He can talk about these at great length if only someone would listen. He lives a somewhat hermit like life in The Shire, spends too much time on social media and is still waiting to go on an adventure.
More Goodness
2000ADAlex Garlandbreaking