previous
You're Next - 8GPPS
random
next
The Mortal Instruments: City of Bones
Film and TV
0 likes 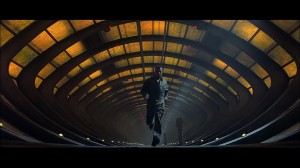 Hot damn that’s an awesome passageway. One of the many examples of visual art in Event Horizon

I am sure that the eagle-eyed amongst you will notice that Event Horizon is not a particularly new film, in fact, it’s now a ‘whopping’ 16 years old.  I’m writing a series of reviews of older films for the millennial crowd and anyone who just plain missed these films the first time round, basically telling why you, the audience, should track down the Blu-ray or Netflix releases and give them a good old watch.

When Event Horizon was first released, it was widely panned by critics and did abysmally at the box office. It was a flop; even now, it only manages 22% on Rotten Tomatoes, and under-rates at 6.6 on IMDB. But this review isn’t necessarily for that wider target audience; it is for those who want to watch (in my humble opinion) the best sci-fi horror genre-masher since Alien.

Alien is a good place to start. The problem with being a sci-fi horror film after Alien is that it became incredibly difficult to do a claustrophobic, space-monster story without being either compared to Alien or without completely ripping it off. This was also true of early drafts of the Event Horizon script.  Apparently, Paul W.S. Anderson sent the script back and over the course of filming, spun it into more of a very “British-feeling” (with the attendant grimness, actors and story-appropriate gore that confers) haunted house-in space epic with more than a dash of H.P. Lovecraft and Clive Barker inspiration.

In my view, this film is Paul Anderson’s best work to date, so try not to be put off by all those terrible Resident Evil films.

The backstory to the film is laid out plain and simply by digital text in space, accompanied by an ominous score. The Event Horizon was a ship that vanished near Neptune with all hands, the worst space disaster on record. The year is 2047 (a numerical term in space exploration that means “the point of no return”), and amid the nightmares of troubled scientist Dr. William Weir (Sam Neill), we are introduced to the early space-faring world, similar to how ours might have been had space exploration been pursued.

Upon meeting the irritable crew of the deep-space rescue vessel Lewis and Clark with Dr. Weir, we find out that the Event Horizon was a research vessel with a radical, experimental warp drive, and what’s more, it’s returned, emitting a distress call. Superstitious pilot Smitty, (Sean Pertwee) in particular seems hostile to the mission.

Then comes one of the film’s most memorable moments comes from a cryptic sound file in the distress signal. The score and general sound design, by the way, are brilliant. They accentuate the action without dragging you out of the moment and it doesn’t fade under the audio. The audio of the distress signal still sends chills down my spine every time I hear it; whoever made that is either a certified genius or an authentic wacko.

The visuals of the film hold up well on Blu-ray. Thankfully, CGI is kept to a minimum (in an era when its overuse was commonplace), the spaceships are filmed models and green screens are kept to where there really wasn’t any other option, as a result, the SFX and architecture still stand as superb examples of film art. My favourite set-piece in the film is undoubtedly the core: 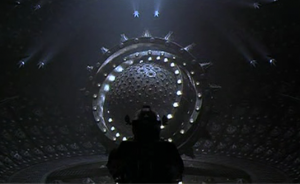 The core. Just look at that thing. Look at it.

The core is reputedly a reference to the Lemarchand box/Lament Configuration from Clive Barker’s Hellraiser. Barker was apparently consulted for several influences on the film, and as such, it’s arguably part of his extended creative universe. It is also better as a film than anything else he’s been involved with. 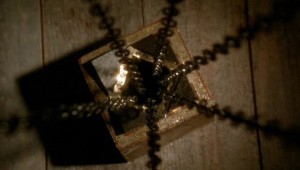 The lament configuration, so called because it configures lamentation.

The core is so plainly evil in an obscure, occult fashion (only accessible through a spinning corridor of magnetic razorblades, naturally), yet it’s relatively inactive. The result is an ominous, permeating dread, and that thing that is so often missing in horror – awe. 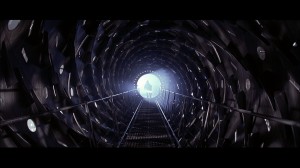 Fresh meat for the grinder, eh?

There are hints from the moment that we set eyes on the ship that it’s evil. It’s designed like a church; a giant gothic cross shape, with many visual elements of the interior “cyber” equivalents of the Notre Dame cathedral.

The film builds its pace and atmosphere expertly with terrifying visions and inexplicable events, horror movie staples, as the Lovecraftian gateway tries to take our heroes to a dimension of pure chaos, barbed wire rape and lunatic evil. As every amateur Lovecraft scholar knows, every cosmic evil needs a cult, and gradually Dr Weir is corrupted through love, guilt and madness to the become the possessed acolyte of the core.

Much like Danny Boyle’s Sunshine – which I also love and is heavily influenced by this film – the film arguably loses a little potency when the antagonist is humanised in the final act. Sunshine, arguably even borrows the antagonist almost wholesale. That said, the homages, scares, disgust and dread run thick right up to the credits. Few characters do anything too contrived or stupid and a lot of the creepiest things in the film are more original than the overwhelming majority of horror out there. It also features one of the most plausibly accurate space decompression sequences on film.

As it is, it is a visually glorious and well told narrative, though its bases are staples to many horror fans. Gateways to Hell, possessions, extreme gore and mutilation, they all appear, but in a profoundly satisfying way. Very few films can manage those elements as well as this film does, and marry them to an authentic-feeling space setting.

The film as it stands has had reams of more gory and hellish material cut from the theatrical and home video versions – around 20 minutes. These sequences were subsequently lost, but were recently found on VHS. There are rumours that they may appear in a future director’s cut. I certainly hope so.

I was born very early in my life and now live on a diet of scorn and sarcasm. Follow me @ryezuul
More Goodness
bloodClive Barkerevent horizon