previous
The Hobbit: The Battle Of The Five Armies Trailer Lands
random
next
Watch it Whilst You Can: Deadpool Test Footage in High Res
Film and TV
0 likes 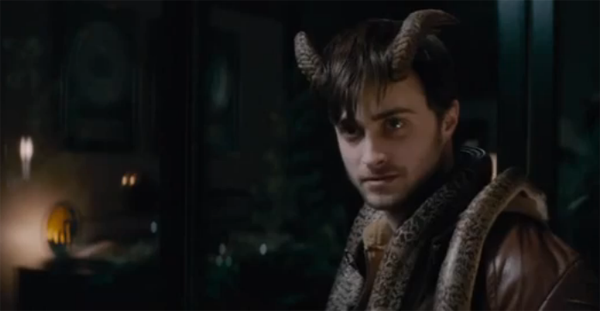 After languishing in limbo waiting for a distributor, production wrapped back in 2012, Horns based on the best selling book by Joe Hill looks set to finally appear in cinemas this year with the first trailer being shown at SDCC.

Horns is the story of Ignatius “Ig” Parish, after the mysterious rape and murder of his girlfriend Merrin, Ig faces accusations for what happened to his girlfriend and wakes up after a night of drunken oblivion to find himself growing a pair of horns. Ig quickly realises that the result of this is people, from friends to complete strangers, openly confessing their darkest secrets to him and he is able to manipulate them to his will. Hill’s book is a non linear narrative which features flashbacks and also touches on metaphysical aspects.

The film which is directed by Alexandre Aja features Daniel Radcliffe as Ig, still best known for the Harry Potter films which contrast sharply with the dark tone of Horns whilst Merrin is played by Juno Temple. The trailer shows Radcliffe’s Ig dealing with an accusatory angry mob, discovering his new horns and the effect they have on people along with his ability to manipulate others.

Horns is tentatively set for a Halloween release.

Andy Haigh started writing to counteract the brain atrophying effects of Retail Hell, now it's an addiction. Andy is an unrepentant sequential art absorbist and comics are one of his passions. Other interests include Film, Music, Science Fiction and Horror novels and quality TV like Game of Thrones. He can talk about these at great length if only someone would listen. He lives a somewhat hermit like life in The Shire, spends too much time on social media and is still waiting to go on an adventure.
More Goodness
daniel radcliffeFilm