previous
TV: Round up of the Renewals, Cancellations and Newcomers
random
next
Snyder Gives us a Peek at the Batmobile for Batman vs. Superman
Film and TV
2 likes 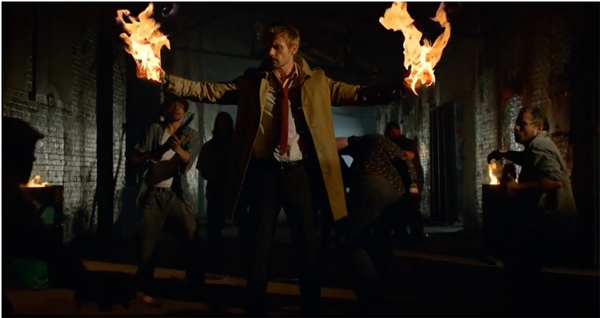 The first trailer for NBC’s upcoming “Constantine” has just appeared and contrary to what lots of people were probably thinking it actually looks good, really good.

There’s been a lot of internet chatter about how the show would turn out and also exactly what it was going to be based on given that the Hellblazer comic, John Constantine’s home for 20+ years, is infamous for being squarely aimed at adult readers whereas the character’s new comic home “Constantine” is distinctly less so.

That question has been answered as the trailer features the script “Based on the DC comic Hellblazer”.

It’s not just lip service either as the trailer shows John as an inmate at the Ravenscar institute for the mentally deranged undergoing shock therapy, a major part in Hellblazer mythology, before introducing Lucy Griffith’s Liv, Liv is the daughter of one of Constantine’s old friends. Confused and traumatised by horrific visions and nightmares she has the gift for seeing the world as it really is, but unlike Constantine, she is completely new to the experience and, as Constantine says:

“Now that you can see these things, they can see you. And they don’t like to be seen.”

Matt Ryan not only looks the part of John Constantine, but also seems to get his attitude down too. Whilst expecting the show to be filled with John’s standard profanity is a bit of an ask, he does manage to get off a “bollocks” in the trailer and it also seems to capture his general not really wanting to get involved vibe too, which is key to the character.

The trailer also features Harold Perrineau’s Manny, a character created for the show, who is possibly an angel or demon, having a rather ominous conversation with Ryan’s Constantine in a smoking crater.

Whilst the show is yet to air and it’s not clear if there’s going to be a chief antagonist or whether it’s Perrineau, it has to be said that this trailer does a lot of things right. So it’s not set in London and apparently John might have kicked his chain smoking but this still looks pretty damn good.

Andy Haigh started writing to counteract the brain atrophying effects of Retail Hell, now it's an addiction. Andy is an unrepentant sequential art absorbist and comics are one of his passions. Other interests include Film, Music, Science Fiction and Horror novels and quality TV like Game of Thrones. He can talk about these at great length if only someone would listen. He lives a somewhat hermit like life in The Shire, spends too much time on social media and is still waiting to go on an adventure.
More Goodness
ConstantineHarold PerrineauHellblazer