Future Shock documentary set to tell the story of 2000AD 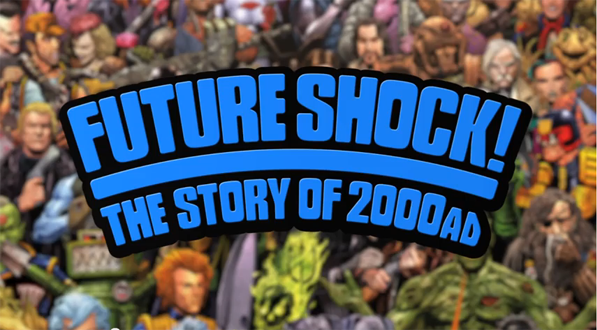 Future Shock is the name of an upcoming documentary that looks at the origins and long history of 2000AD, the seminal and influential British anthology comic.

First appearing in 1977 originally intended to capitalise on the growing interest in sci-fi with the appearance of Star Wars, 2000AD was far removed from George Lucas’ clean cut space opera. 2000AD quickly established itself as being gritty, violent, edgy, anti-authoritarian, blackly comical but most of all inherently British too. The 2000AD name would also become synonymous with a host of memorable characters, completely unlike anything else in comics, the most infamous being Judge Dredd, with others including Rogue Trooper, Strontium Dog, Slaine, ABC Warriors, Nikolai Dante, Sinister Dexter, Durham Red and many more.

Director Paul Goodwin had this to say about 2000AD,

“2000AD is the comic that people don’t know they like. Its pop cultural influence is massive – it’s been referenced, homaged and outright ripped off in everything from other comics to films to television to music – and yet too many people are unaware of it. So many of us owe a debt to 2000AD – both as fans and creators – and FUTURE SHOCK! is our attempt to acknowledge that.”

2000AD editor Matt Smith (no, not that Matt Smith) had this to say,

“The birth, development, and legacy of an important British institution like 2000 AD is a tale worthy of a feature-length presentation – and I’m very excited to have it told in this documentary project. The SF anthology broke the mould when it was launched in February 1977, and over the past 36 years it has been responsible for publishing some of the most groundbreaking, influential comics in the world, created by a roster of amazing writers and artists that have gone on to change the face of contemporary graphic storytelling. This doc is an epic undertaking, three and a half decades in the making, and I can’t wait to see the history of the Galaxy’s Greatest Comic unfurl on screen.”

Andy Haigh started writing to counteract the brain atrophying effects of Retail Hell, now it's an addiction. Andy is an unrepentant sequential art absorbist and comics are one of his passions. Other interests include Film, Music, Science Fiction and Horror novels and quality TV like Game of Thrones. He can talk about these at great length if only someone would listen. He lives a somewhat hermit like life in The Shire, spends too much time on social media and is still waiting to go on an adventure.
More Goodness
2000ADABC WarriorsBritish Comics