In a recent interview Elba gave with The Telegraph,  ‘The Wire‘ star confirmed that he and Tom Hiddleston were renewing their roles as Heimdall and Loki.

Elba chuckles. He’s not meant to talk about this, but he clearly enjoys doing things he’s not meant to do. “I’m in Avengers,” he reveals. He means that his Thor character, deity-cum-sentry Heimdall, appears in Age of Ultron, the second instalment of the superhero ensemble franchise. “And I’m doing a scene with Chris Hemsworth [who plays Thor] and Tom Hiddleston [Loki], and they’re like, [whispers] – ‘Aren’t you [meant to be] in Ibiza?’ ” That bassy chuckle again, followed by a frown. Elba came straight to Ibiza party-time from a mythical Norse god/Marvel universe that has made billions at the global box office. His head is all over the place. “That’s why I was p—– about my set yesterday. I really just wasn’t there. I was annoyed.” 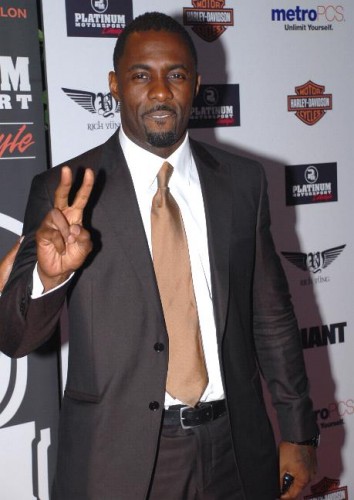 However it appears that the man from East London isn’t exactly enamoured with his role for Marvel, in fact he is pretty far from happy it appears.

“Mmm. Yeah. I mean, I didn’t quite shake it off.” It seems he didn’t have the chance. “It was really weird,” he begins. “I’d just done eight months in South Africa. I came to England and the day I came back I had to do reshoots on Thor 2.” He raises an eyebrow. “And in the actual scene my hair was different, my…” He stops and gives an exasperated sigh. “I was like, ‘This is torture, man. I don’t want to do this.’ My agent said: ‘You have to, it’s part of the deal.’ ”

In the scene in question in the superhero movie, “I’m actually falling down from a spaceship, so they had to put me in harness in this green-screen studio. And in between takes I was stuck there, fake hair stuck on to my head with glue, this f—— helmet, while they reset. And I’m thinking: ‘24 hours ago, I was Mandela’. When I walked into the set the extras called me Madiba. I was literally walking in this man’s boots. [Within] six months, the crew, we were all so in love with this film we had made. I was him. I was Mandela, practically,” he insists.

“Then there I was, in this stupid harness, with this wig and this sword and these contact lenses. It ripped my heart out.”

So whilst we have Idris Elba and the mighty Heimdall for now, chances are he won’t be around for long, at least not if he can help it.

As an aspiring journalist I have found a home here at geek-pride, where I can write upon many subjects. If anybody has something they believe should be reviewed or newsworthy then feel free to send me a message, I always enjoy talking to people.
More Goodness
Avengersavengers age of ultronChris Hemsworth