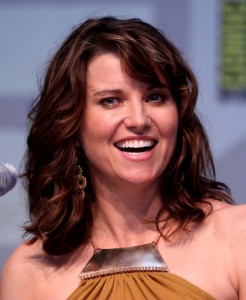 After a somewhat lacklustre first half and a finale that according to the fans was definitely worth the wait, Agents of S.H.I.E.L.D strives to surprise us once more, this time by bringing Lucy Lawless on board. Unfortunately the information is still scarce about what part she might portray in Marvel’s show, however, considering that the premier date for the second season is fast approaching, I’m sure that won’t be true for long.

Lucy Lawless, mostly known for starring as the titular character in Xena, Warrior Princess and for appearances in Battlestar Galactica, Spartacus: War of the Damned and many others, has proven her acting chops time and time again, which only serves to fuel the speculation when it comes to what her role might be this time around. Given that SDCC is fast approaching, that question might be answered sooner rather than later. Until then, do your best to play detective, trying to figure out her future character.

Don’t forget that the series is returning for its new season on September the 23rd, bar any delays.

What's there to say about me? I love the sci-fi and fantasy genre when I read, but I am in no way limited to that alone. I do think Frank Herbert deserves a statue for his writing(if there is one, point me in that direction, please). I enjoy writing quite a lot, but I am also kinda lazy. If you want to make me happy give me books or Doctor Who collectibles. Or a real TARDIS, in which case I will love you forever.
More Goodness
Agents of SHIELDJoss whedonlucy lawless