NBC has released the first official promo shot of Matt Ryan as John Constantine and it has to be said, short of a missing Silk Cut, it looks like he’s walked staright out of the pages of Hellblazer.

The network also released an official synopsis for the show, 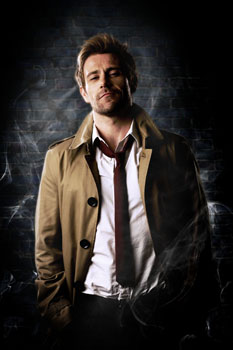 Constantine, who is reluctantly thrust into the role of defending our world against dark forces from beyond.”

“I’ve been a fan of John Constantine since he was first introduced in 1985. This Constantine, envisioned by Neil Marshall and embodied by Matt Ryan, looks like he sprang directly from the comics’ covers. Fans old and new are going to be in for a treat.”

Given the massive potential for the show,  getting fans of the character’s comic book origins onside could make all the difference. Given Goyer’s admittance that they are ‘negotiating’ with the network over Constantine’s chain smoking, this really looks like it’s up in the air and could either be a smash hit like DC’s other TV show Arrow on The CW, which is going from strength to strength, or it could be become a maligned missed opportunity and victim of its own hype like Marvel’s Agents of S.H.I.E.L.D. from ABC.

Andy Haigh started writing to counteract the brain atrophying effects of Retail Hell, now it's an addiction. Andy is an unrepentant sequential art absorbist and comics are one of his passions. Other interests include Film, Music, Science Fiction and Horror novels and quality TV like Game of Thrones. He can talk about these at great length if only someone would listen. He lives a somewhat hermit like life in The Shire, spends too much time on social media and is still waiting to go on an adventure.
More Goodness
breakingConstantineDavid S. Goyer