Sydney James Harcourt is an American singer, musician and actor who – by his own admission, from the woods of Michigan – has had the incredible chance to be a part of the Hamilton Musical since the very beginning, before it genuinely took the world by storm. 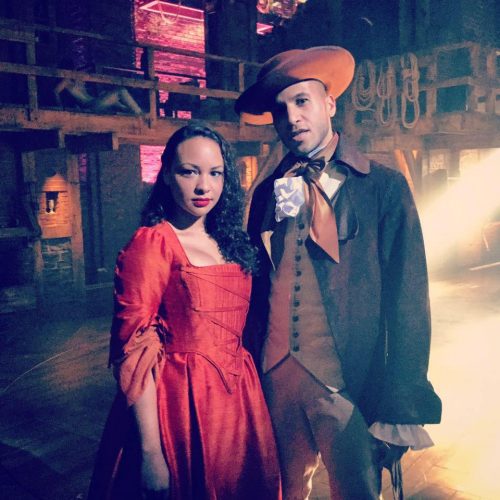 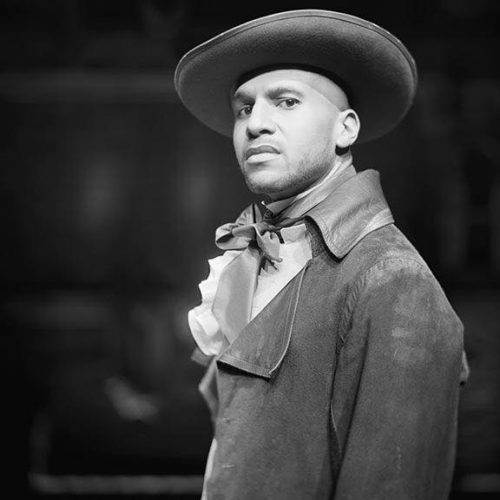 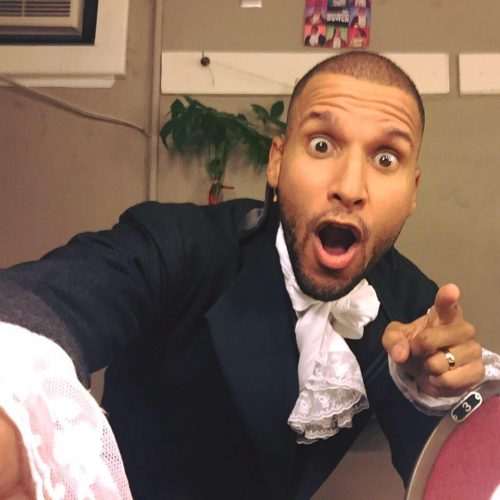 Gracious enough to share some of his time with us, we sat down for a chat to talk about the upcoming Hamilton movie which was released today on the Disney+ streaming platform. The first thing we noticed about Sydney is that he is an incredibly down to earth person. You would expect from someone that has had the chance to be a part of something so big, that has ‘rubbed’ shoulders with the Broadway elite and even several celebrities, to be a little less modest, a little less open, but it seems that Sydney has maintained a winning attitude without giving up on his kindness.

Wearing a Black Lives Matter t-shirt, he openly discussed with us, explaining the way systematic racism is working in the US, a hot topic that not many touch on, at least no further than a throwaway black picture on their instagram feed. But Sydney did more than that, painting a very real picture of what it is like being black or non-white, in America, today.

He shared with us a story of an audition for a rap musical – “Holler If Ya Hear Me”, on the music of Tupac Shakur – where he was stopped by a pair of police officers. It was hard to hear how the officers that stopped him just because of his outfit brings out the profiling that he, as many others, found himself subjected to.

Though humorous to us, due in no small part to his casual delivery, he shared the possible thoughts going through those officers heads as they questioned him – of how many drugs he was in possession of, how many children he’s fathered. The process was long, as they didn’t believe him when he told them he had no record – they spent a long time checking just to make sure – and when they asked him where he was going, they acted as though it were an improbable thing for him to have a job.

Being stopped and forced to wait for your criminal record to be checked just for being you, and after insisting that you do not have one, has got to hurt and the fact that the bubble seems to have burst now in the way it has is a sign that it was long overdue. 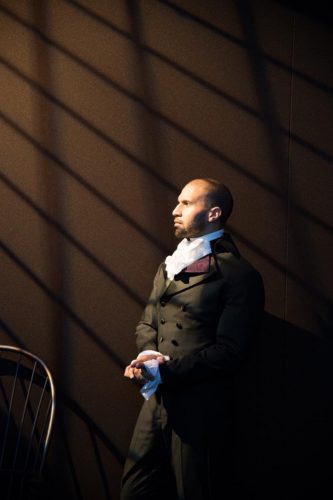 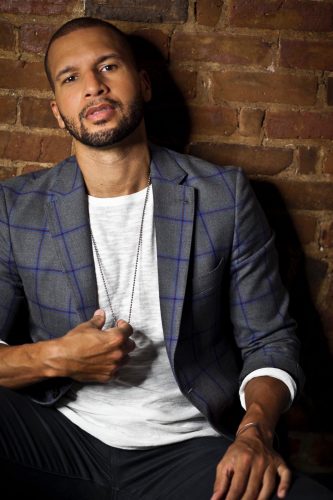 Still on the topic of Black Lives Matter, he mentioned how this time it feels like the move is more inclusive than before. As an openly gay man, he never felt quite accepted, and he was left out of the discussion, due to the views that the black community holds on homosexuality or anything outside the norm. This time, he says, it feels like it truly is an ‘All black lives matter’ situation – black, brown and everything in between – everyone has a place at the table now. In particular, he made note of the inclusivity of the movement bringing to light the current plight of the Native American population, even to help clarify to modern Americans that Native Americans still exist in a modern context.

Given the kind of history that Hamilton presents, we launched into a discussion on the way history tends to be romanticized and how most people know very little of the reality behind the glamour of the founding fathers. Sydney admitted he knew surprisingly little before the musical, did some research and has plenty of things to say about the particular behaviours that tend to be glossed over in history books and even in the Hamilton musical.

Slave ownership, behaviour towards Native Americans, the suffering spread left and right in the name of a new nation all come to mind. The play has been criticized for skipping over these and, when asked about it, Sydney mentioned how now people behind it are doing their best to educate people more about the ‘real’ history behind it. Students are invited to view the play and they then get to write their own rap songs or do their own sketches to be more familiar with the reality behind the curtain.

As someone who has done many roles in Hamilton, but particularly Aaron Burr – probably the least loved character in the play – Sydney talks about learning more and more about him and according to him, the man was ‘vile’. He was also the character with the most words to learn (over 10,000) and that could not have been an easy feat. There are a lot of ‘How does a…’ tracks that he had to make sure not to mix up, and impressively managed never to mix them up.

It’s not an easy feat, and one which is made even spectacular when discussing the conditions of the first time he stepped up as an understudy. He was one of the first understudies to take up one of the main roles, and the process was rather swift – learning about playing Burr at 12:30 on a Saturday to play the character at the performance later that day. He was given the swiftest of instructions, a brief explanation of his entrances and exits and was provided with a costume that was made for Leslie Odom Jr to wear during the off-Broadway performances.

The process behind a play is much more elaborated than we imagine, with walkthroughs, read throughs, repetitions with and without orchestra, yet he had to make do with a little more than a passing through the stage. However, he made a conscious choice not to panic and take everything as it came, and he got the job done.  After the performance, he met up with René Goldsberry Johnson backstage – who played the role of Angelica Schuyler, and previously performed alongside him as Nala in a Broadway run of The Lion King – and the two hugged each other and let the emotions flow. It was one of the scariest moments in his career, and helped every other performance afterwards as nothing could possibly match the fears and anxiety from that performance.

When asked about any type of ‘bloopers’ he could share from his time with Hamilton, he mentioned that whilst there were no Broadway performances that came to mind there was one early public performance where he appeared as King George’s herald and managing to go the wrong way, straight into the other herald. This was a thing that did tend to happen at the beginning of the play, as there were many changes done on the fly, as the play grew and evolved into what it is today.

We did learn a funny story that has now forever planted the image into Cristina’s head of Sydney James Harcourt as a lion taking a dive in a pool by walking too close to the edge of it. When playing a very dramatic scene in one performance of The Lion King – where Simba realizes his father will forever live within him – he apparently nearly toppled off the stage. He managed to right himself after some severe hand-wheeling, saving the audience from getting too close to the action. Based on his body language, it seems that the first-row people were more than happy to pull away, instead of helping – not the rock concert crowd there, obviously.

Upon mentioning the many roles he played in Hamilton, which is undoubtedly a scary thing, having to change your ‘skin’ so many times and embody so many people – at times during the same show –  Sydney described it in a quite different way. Given the amount of shows they would do in a week, the change to a different character brought some reprieve from the Groundhog Day situation where everything became routine. Being someone else for a while allowed for something else. Maybe even some rest for his body.

We might see only the glamourous side of theatre, but with the 8, sometimes 9 shows a week, the whole thing took a toll on his body. He mentioned Epson salt baths, acupuncture, going to see a chiropractor and getting massages just because the high-heeled shoes were a nightmare. Going up and down stairs, dropping to your knees and handling a rotating stage added some more pain into the mix. It’s something those who have seen Hamilton live barely get to see, or consider.

And in the glimpses of performances that are available so far online, all that shines is the talent and dedication of everyone involved. And Sydney has both in spades.

Discussing the difference between doing a movie and a play, he mentions how easy movie/series actors have it, with chairs between takes, hour long rests and even the Kale smoothie, if needed. Such reprieves are not a thing in theatre, but he was still quick to advise Hillary Duff to go for her idea of staring in a stage musical during their time filming for a television series Younger – at a time when he was still performing in Hamilton too. (Maybe he is a little cheeky too).

As we were all still isolating due to the global pandemic, the conversation turned towards what an artist does when he is cooped up inside and away from the stage. It seems that for Sydney this was a blessed break, that allowed his own projects to take center stage.

Maybe not his knitting passion – which he mentions as he describes it as something he used to do during his Hamilton days that yielded quite a few scarves – but his music projects including an amazing collaboration with Nina West. The wonder of digitalization came to play and while apart, they felt that they truly were in the same place recording.

He spoke about his relationship with her as something that inspired and helped him through the years, as they had been friends for quite a lengthy amount of time. Even now, or at least when it was possible, she braved the pandemic to see new plays, to go meet new and old friends, despite the apprehension from Sydney who chose his home state of Michigan to retreat to, during the lock down.

This collaboration – a video cover of “A Safe Place to Land” for the #blacktranslivesmatter movement, which was Nina’s suggestion for the digital Pride event SHE’S A RIOT – was just one of the projects he’d had the pleasure of taking part of during this time of ours. He mentioned more musical numbers were on the way – a mash up of Rise Up” and “My Shot” with René Goldsberry Johnson and the cast, and even an a capella collaboration with Six Appeal of “History Has Its Eyes on You” in honor of the protests in Minnesota and around the country.

Whilst our time with Sydney was brought to a swift close, it was clear to see that he had thrived during this time, and it was great to see that his spirits were high. He encouraged us to read the Hamilton book to continue extending our knowledge of America and the narrative provided through the musical. It was an absolute pleasure to talk to him, and we at Geek pride wish him all the very best going forwards.

After all, when history has its eyes on you it’s a real shame to throw away your shot. 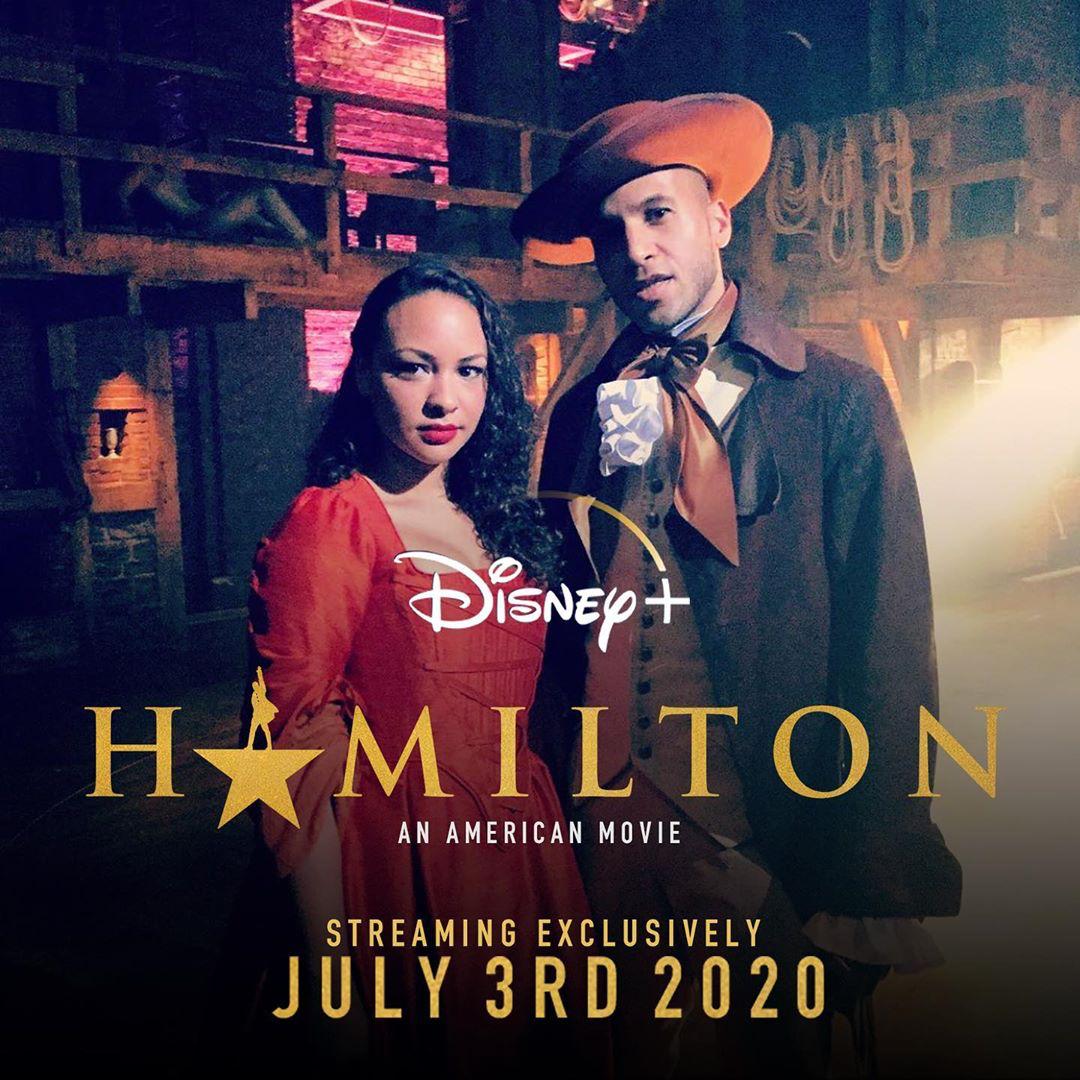 Hamilton is available now on the streaming service Disney +.

I read. I write. I play.
More Goodness
alexander hamiltonDisneyhamilton the movie