Oz The Great and Powerful – 8 GPP

Straight to the point: This movie is the tale of the great adventure that Oscar Diggs finds himself dragged into in the wake of a tornado, that takes him, much like Dorothy, from the bleak sights of Kansas to the magical land of Oz. It also offers the background story for many wonders we’ve seen in The Wizard of Oz, without actually destroying the magic of it all as I initially feared.

Let’s see what the movie is all about, shall we? As a prequel to the much loved The Wizard of Oz, the movie had big shoes to fill and while not as compelling as the original story, it still managed to enchant the audiences. I was unfortunate enough to find myself in a room filled with children who had a hard time hiding their awe at what they were seeing. While I haven’t been a child in a long time I still found it enjoyable enough to stay entertained for the two hours it took to get a resolution.

The tale starts in Kansas where we discover that Oscar (James Franco), or Oz as everyone calls him, is a less than honourable man, toying with the hearts of those around him, sweeping girls off their feet with tales of wonder that manage to charm them making them give in to his advances, not to mention he’s a con man, pretending to be an actual wizard. I have a feeling those particular bits of information were added for the benefit of the parents that would join their children at the cinema, rather than for the children. There were quite a few jokes as well, that I’m sure went over the kids’s heads, since they were targeting a different audience altogether.

Once Oscar gets swept up from the dusty, colourless Kansas (just like The Wizard of Oz the film starts in black and white) by a tornado, his life changes altogether. I admit I wasn’t a huge fan of seeing the black and white portions of the film, not because I have something against black and white movies, but there was something almost disturbing in the way the start of the movie was shot, giving it an almost Burtonesque feeling. For a moment I even wondered if he had directed the film, but quickly amended that belief as Oscar landed in Oz. Crash landed is more appropriate since he fell out of the sky, mirroring the tale of Dorothy, who came looking for a way home. The parallels to the original story are hard to miss in the film and only those unfortunate enough not to have seen it will fail to notice them.

Oscar, found by the beautiful Theodora (Mila Kunis), discovers that he is believed to be a mythical wizard that will free the Land of Oz from the wicked witch. Surrounded by a beautiful and colourful world, one that he is promised he will rule as a king, Oscar is quick to accept to join in the quest of freeing Oz, without fully understanding what he’s signing up for. The story starts twisting and turning with new discoveries that change everyone’s beliefs about right and wrong. While this tale seems to be aimed mostly at children it has its dark parts and I felt that sometimes it was aiming to sent too many messages to an age group that wouldn’t be able to actually understand them properly, not for a while at least. (Though that might be my biased opinion since the theatre was filled with kids aged six and less and they were more smitten by the 3D effects than the meaning behind their use).

The movie is actually quite entertaining, more so than I had expected it to be, given its topic, but it combines comedy and drama perfectly, keeping the viewers enthralled. Unfortunately, it lags a little  towards the end and given that it’s two hours long and the ending is the most important moment of the movie, the part that most everyone will remember, it’s slightly inexcusable. One of the best things about it however are the CGI effects, I found them flawless and I’m speaking here like a viewer, not an expert. Scenery porn is not a misnomer for what they managed to create with Oz The Great and Powerful, everything so enchanting and beautiful that even if the movie had been bad, it would’ve kept people entertained. Its greatest asset was its greatest flaw as well, sometimes distracting the audience from what was actually going on with the story.

James Franco does a great job at playing the very flawed Oscar and in a short amount of time we see what the good witch has seen in his heart, the goodness that he hides under his pretence of being nothing but a selfish man, eager for a quick win, for a quick fix. Michelle Williams (and I won’t tell you who she plays, since it will spoil some things for you) does a great job as well, though she seems at times to be going through the motions. However, I found myself disappointed in Mila Kunis, it was almost like she wasn’t even trying at times, her acting varying wildly between actually believable and “not even going to bother”. Of course, that’s my entirely subjective opinion on the matter.

The cast was joined by Rachel Weisz as the witch Evanora, Zach Braff as Finley (a very well trained monkey), Tony Cox as Knuck and Joey King as China Girl/Wheelchair girl, all performing wonderfully with the little they are given to do.

What else is there to be said about the movie? Simple, go watch it. They have these kind of critters in it, it can’t be bad! 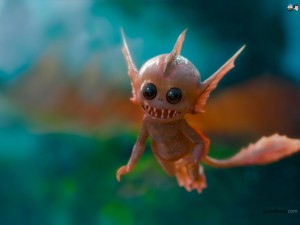 What's there to say about me? I love the sci-fi and fantasy genre when I read, but I am in no way limited to that alone. I do think Frank Herbert deserves a statue for his writing(if there is one, point me in that direction, please). I enjoy writing quite a lot, but I am also kinda lazy. If you want to make me happy give me books or Doctor Who collectibles. Or a real TARDIS, in which case I will love you forever.
More Goodness
breakingbruce campbelljames franco