previous
A-Team to return to our TVs...Yay?
random
next
The Martian
Film and TV
0 likes

If I said to you, “I’ve just watched a touching, emotional contemplation on humanity’s role as a member of a biosphere,” you’d assume I’d watched some art students’ fledgling project. If I then added, “It also had John Carpenter-esque monster transformations and parasites that hunger for human flesh,” you’d know I’m talking about an anime series.

Parasyte -the maxim- is the kind of show that only comes out of Japan. When I heard the premise, I knew I had to give it a try, though: a young man named Shinichi wakes up to find that his dream that a parasite tried to inhabit his body was true, and that, while his actions in the dream prevented it from taking over his mind, it now controls his right arm. Together, he and his parasite Migi must fight for their own survival, hiding from and facing off against both humans and other parasites. The premise is just unique enough of a spin on the classic ‘bodysnatchers’ tale that it hooked me in, and I was glad I tried it. 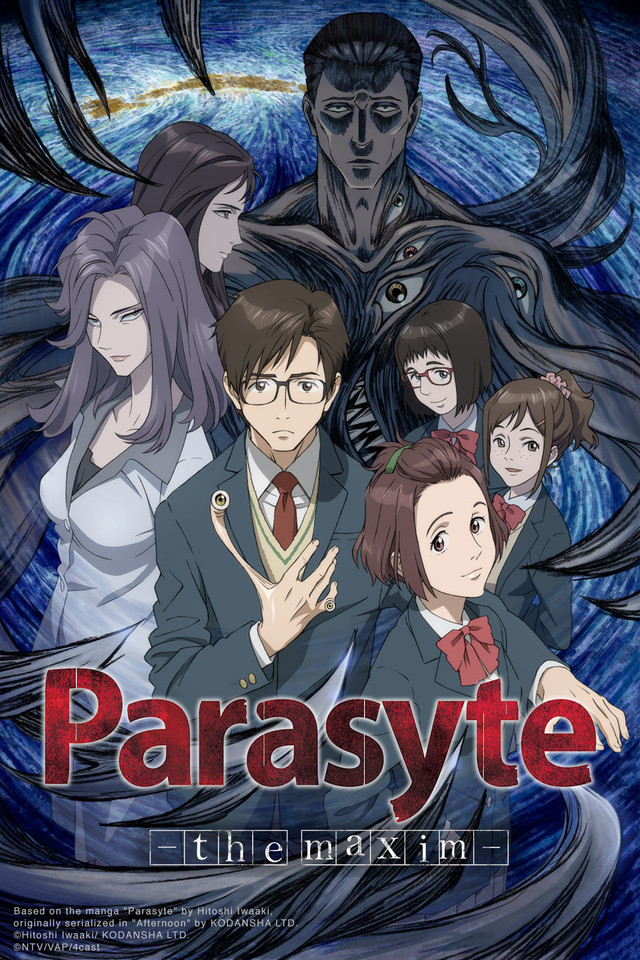 The visuals of the parasites unfurling once-human faces into deadly biological weapons are reminiscent of The Thing, and are appealing in spite of their disgusting nature. In fact, the art direction as a whole is very well done, giving the infected human hosts uniquely alien expressions and displaying improbably fights between horrors in gorgeous fashion. There’s no lingering over the cruelty on show, merely a stark portrayal, and this works well throughout the series.

The story, too, is well-realised, though there are some weak points. Shinichi’s struggles with what he is becoming, something other than human, are mostly drawn out nicely and portrayed through actions and other characters’ reactions to him. Migi is a great character, displaying an insectoid intellect very well, particularly in disagreeing with Shinichi’s often noble intentions. To Migi, survival is key, as it would be to any animal, and he doesn’t have the emotions and instincts which humans possess to drive us otherwise. Their clashes are thought-provoking and consistent, and the relationship between the two develops nicely.

Shinichi’s situation affects his home and personal life too, mainly his love life with his crush/girlfriend Satomi. Satomi serves as a sort of conscience and baseline for Shinichi, a way to compare how he has changed since being infected with Migi. At times, their confrontations and ‘fights’ are very over-wrought, and some of the weaker moments of the story, but we are dealing with teenagers so maybe it can be forgiven. Angst is the default setting for a teen, as we all know. 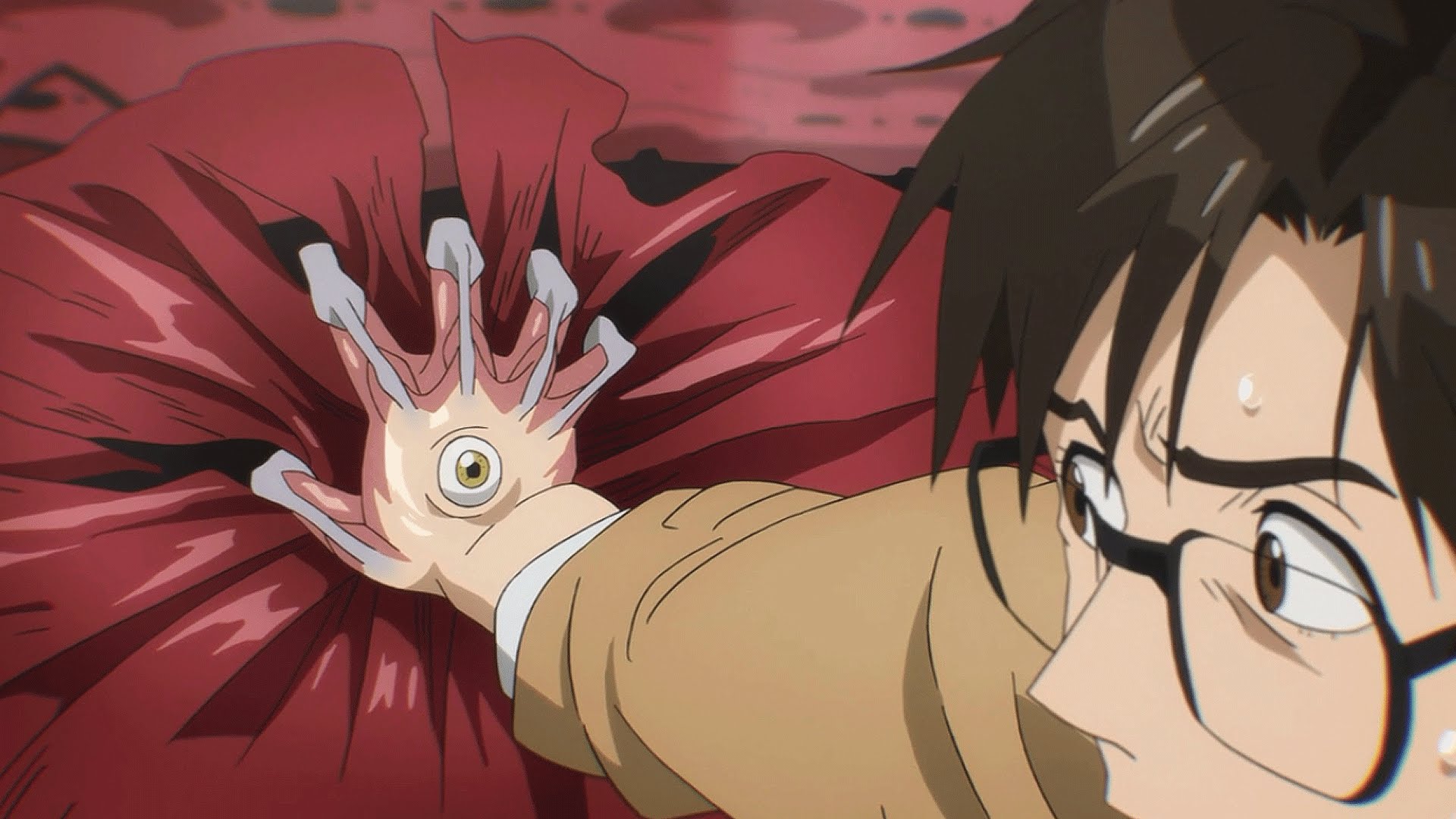 As the story progresses quickly, we meet other parasites who have infiltrated human society. The first is within a dog, providing a very Silent Hill visual of a dog whose head opens up to present vicious innards, and from there we see parasites trying to integrate with human society and those trying to destroy it. Ryoko Tamiya is one of the former, inhabiting a supply teacher who comes to Shinichi’s school. She is unique amongst the parasites, inquisitive and curious, and even births a human son.

With Ryoko, the more standard parasites, and Migi/Shinichi, the crux of the philosophical points of the series comes in: questions about co-habiting the other with other species, as Migi and Shinichi share a body, and who bears responsibility when a shared resource is destroyed, as well as questions on environmental policy and relative morality. Writer Hitoshi Iwaaki obviously had a pro-environmental stance in writing the original manga, and this carried over well into the series. Particularly with some of the ironies and complexities in the story later on, such as pollution helping save Shinichi’s life.

Parasyte -the maxim- is not a black and white morality tale, and tries to have you understand all perspectives, even those beyond the characters themselves. The issue of where the parasites came from is never fully concluded, but hinted at, allowing the audience to draw their own conclusions. This, is you’ve seen my other reviews, is something I cherish in a story. 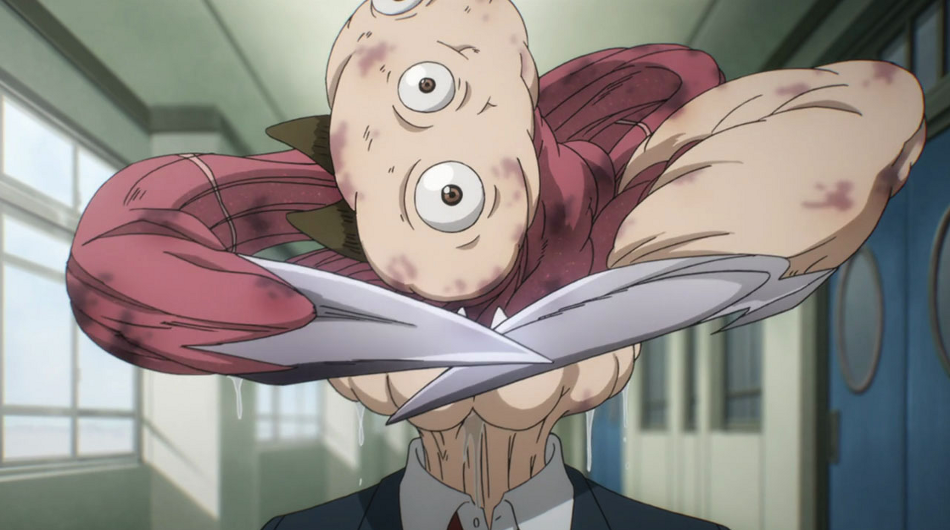 It is not a perfect tale, though. Shinichi’s transformations throughout the series means he is a very inconsistent character, one difficult to build any sort of rapport for. It makes sense for Satomi to doubt who he is, question their relationship often, but it makes it hard to latch onto anyone in the story. If anything, Migi the parasite is the most consistent and interesting protagonist. A slower transition for Shinichi, with less time contemplating the changes, might have worked better.

The resolution between Shinichi and Migi is also unsatisfying. Without spoiling it, it follows one of the standard anime resolutions, and was a little wearying. The sting in their tale is almost worth it, almost, but not quite. Again, sudden character changes mar the story where a more gradual shift would have worked better.

These are nitpicks, though. Parasyte -the maxim- is a gory, violent, and contemplative story about humans, humanity, and our relationship with the Earth. It isn’t afraid to take unusual turns, shows some fascinating fights and encounters, and delightfully borrows heavily from John Carpenter (so much that I think the man must be bankrupt). It is definitely worth your time if you love anime or unusual stories.

Sean is an editor, writer, and podcast host at Geek Pride, as well as a novelist. His self-published works can be found at all good eBook stores.
More Goodness
Animehorrorreview