previous
The King - A Netflix film that opts for style over accuracy.
random
next
Sonic The Hedgehog Review : Family Fun Speeds in for a Win!
Film and TV
0 likes

To say i’m a Kevin Smith fan is putting it lightly and to even say i’m in the demographic doesn’t even scratch the surface of my adoration of this man. With an evening of Reboot Pie, followed by an after show Q&A, I couldn’t quite understand why the gods hadn’t struck me down right there because this was as good as life was going to get… Or so I thought…that was until I met him after! 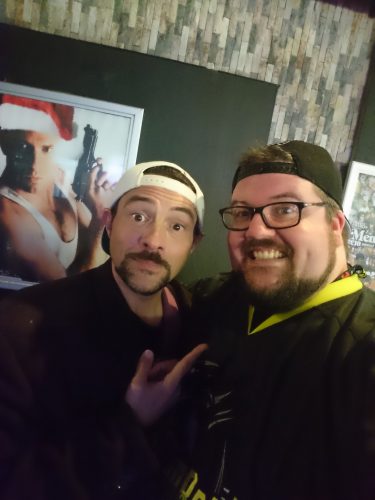 I am therefore what some may call a ‘Super Fan’ from the beardy face, to the backwards cap and icehocky jersey this now Legendary host, writer, actor, Pod-castor, Director and all round lovable man has been a huge influence on my life for so long. Not only from his work in films but his general attitude and positive spoken word message. In a world where actual heroes, who turn out to be exactly as they are on TV is hard to find, Kevin Smith IS the real deal. Friendly, funny, appreciative and interested in talking to his fans; it isn’t hard to understand why they are so, well… Super. He gives them everything and in return they give him their undivided loyalty.. My Captain, My Captain indeed.

And yet things took a turn for the worst just over a year and a half ago when he suffered a massive heart attack, or the “Widow Maker” as it was deemed in the medical community – a 100% blockage of the arteries where 80% of the sufferers would die.- Luckily for Mr Smith though he managed to be in the best hospital for this sort of attack and with only a 20% chance of survival his doctor looked at him and said “You’re gonna live cause I’m good!” while disappearing into Kevin’s crotch. 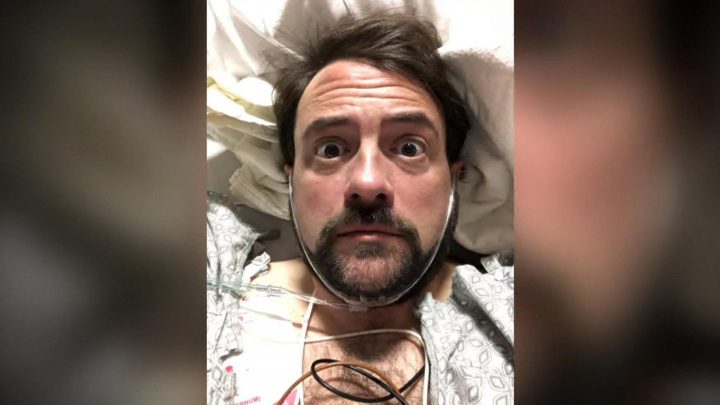 With the operation behind him and a new bill of health provided  by this Angel of a doctor, Kevin Smith, sorted out his diet, became Vegan and used his near death experience to set us all on the road to reboot!

The hype started, as it always does, at the Cantina of Scum and Villainy where Kevin and co host Marc Bernardin do their weekly “Fatman Beyond” pod cast for the good people of Hollywood. There Kevin announced that in a couple of weeks he will begin shooting in New Orleans his direct sequel to “Strike Back” affectionately titled “Jay and Silent Bob Reboot” much to the roar of applause from the live crowd watching the show. Just like that, the “FAT-SIGNAL” was lit and Kevin started to assemble his stella star studded ensemble of a View Askewniverse final “wink wink” swan song. 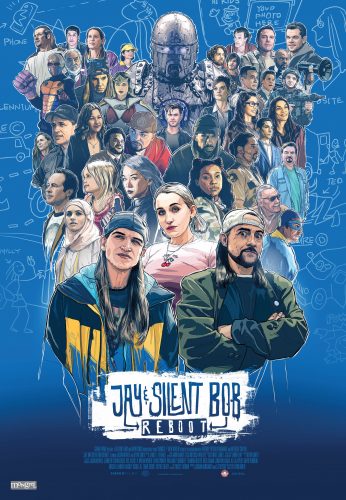 Following Clerks II, news appeared often of other titles to be released in the View Askewniverse; including Clerks III and Mallrats 2 but sadly in 2017, Kevin Smith had confirmed that those projects were cancelled.. booo!. Luckily for us the script for Reboot was already finished when it was announced and it was said that Miramax would produce it. It was then announced on 25th January, 2019 that Saban Films (yes that Saban as in Power Rangers) had acquired distribution rights to the film in association with Universal Pictures. It is the first film in the View Askewniverse not to be produced by Scott Mosier, and the first film in the View Askewniverse, since Mallrats, not to be produced by Harvey and Bob Weinstein (for obvious reasons).

Filming was initially set to begin mid-2017, then to August 2018, then November of that same year but after numerous delays, finally, filming began on 25th February in New Orleans;  exactly one year after Smith suffered his heart attack!

During the filming of the movie, Smith released a weekly documentary called “Road to Reboot” to which I was a frequent viewer, keeping fans updated on what was being filmed that week. Production wrapped on  27 March, 2019 after 21 days of shooting, which was the same number of days it took Smith to film his first movie, Clerks, 26 years earlier. 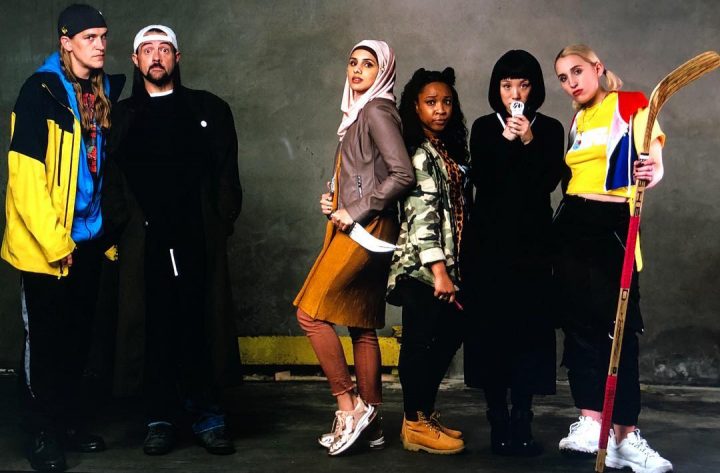 Now, if you don’t know how far Kevin will go to get what he wants, well, lets just say his “i had a heart attack” was used so often to bring back past film actors to make cameo appearances the words lost all meaning…but hey, it worked.

To list the full cast and cameos would probably take several hours so I’m just gonna link the IMDB page right here https://www.imdb.com/title/tt6521876/fullcredits so you can take a gander, Yes before you ask, Kevin got his boyfriend back, with Ben Affleck returning as Holden. 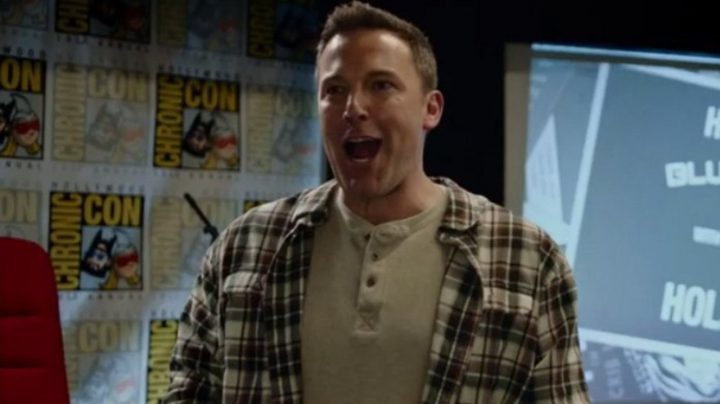 The film was released on 15 October 2019, as part of two Fathom Events showings. The first showing on the 15th gave away a limited edition poster and the second on the 17th was a double feature with “Jay and Silent Bob Strike Back”. Following the Fathom showings, Kevin embarked on a North American roadshow titled “The Reboot Roadshow Tour” with a presentation of the film, followed by a Q&A session. The roadshow began on 19th October in Asbury Park, New Jersey and will continue until February 26, 2020 in New Orleans, Louisiana. Thankfully for us Brits, within this time, he made time to come over to our side of the pond show the film off and do a Q & A too. 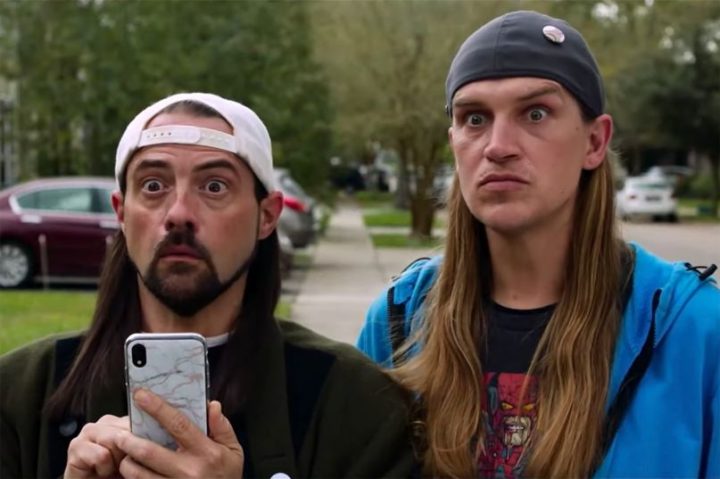 The Film itself is a “Masterpiece” and if he retired tomorrow from making films I could confidently say that he would be able to do so with his head held high.  I haven’t laughed so much in a long time and i left feeling I had been apart of history and in high spirits.

Kevin is the master of making fun of himself / his work and this is very much evident in Reboot with the grace of a ballet dancer and often the KO of a drunken boxer. He also shows no qualms in poking fun at other reboots, remakes and hashjobs that Hollywood has spat out lately and it was good to see that breaking the 4th wall was still a thing like the rest of the Jay and Silent bob movies.

Aside from the slapstick comedy that you associate with Jay and Silent Bob, Reboot actually has some amazing “Feels” moments and even has a Stan Lee guest spot in an after credit scene. I would challenge the Geek who didn’t leave with at least one tear in his or her eye.

If you haven’t as of yet seen Reboot, what the hell are you waiting for, check your local listings with Vue Cinema or go to www.jayandsilentbobreboot.com to find out more… JAY AND SILENT BOB: REBOOT IS OUT NOW! 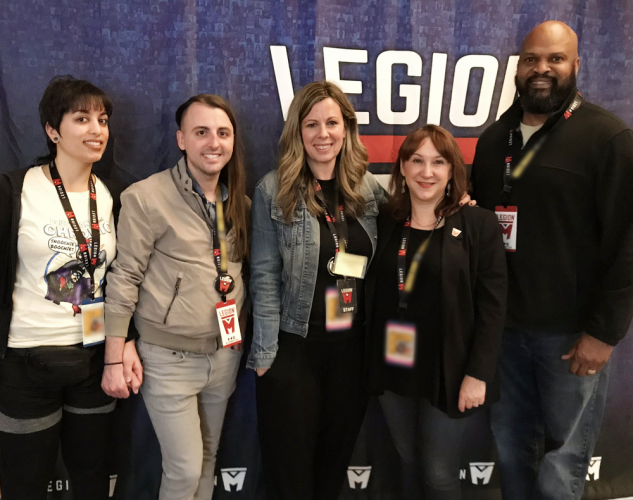 Before I finish I would also like to comment that this whole event wouldn’t have been possible without the amazing team behind Legion M. Legion M is the world’s first entertainment studio that allows fans to invest in and be part of the creation of new movies, television shows, virtual reality and other pieces of entertainment content, a studio that I am also an investor in.

Legion M partners with filmmakers to create and/or distribute movies and Jay and Silent Bob Reboot was one of them; on the night if you were a member or investor, The head of Marketing and Publicity; Clare Bateman-King gave an amazing Chronic Con lanyard as a memento of the night. Clare was amazing and the show couldn’t have been made possible without all Legion M and her hard work. 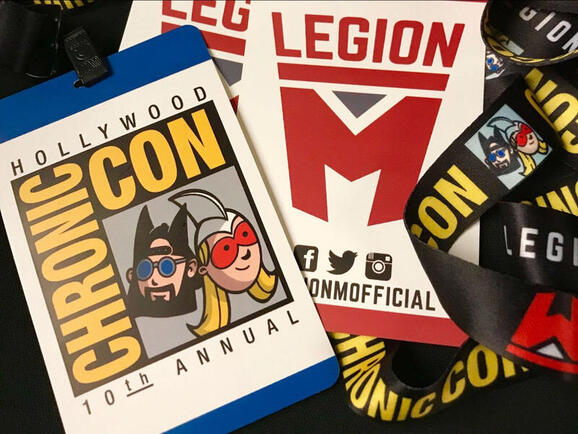