When you’ve served your country as long as Frank has, you’ve seen it all… and when you get to your twilight years, you just want to settle down with a nice girl and bask in domestic bliss. Unfortunately for Frank, no-one else seems to want him to enjoy retirement – including his significant other. To quote his best buddy, Marvin: “But you haven’t killed anyone in months!”

Red 2 has landed, a follow-up to the 2010 hit based on the comicbook of the same name – bringing bigger stunts, new characters, returning favourites and some well-timed humour… but is it trying too hard? Read on to find out.

The general synopsis for Red 2 centers around Frank (Bruce Willis) and Sarah’s (Mary-Louise Parker) relationship, and Frank’s refusal to allow Sarah into his former life. Unfortunately for Frank, Marvin (John Malkovich) and a whole host of bad guys are forcing the situation upon him where he has no choice but to involve her. Various government authorities are after Frank and Marvin for their involvement in a weapons project called “Nightshade” – and as a result they have a price on their heads.

This lends for some amusing quips as along with the US authorities – represented pretty well by Minority Report‘s Neal McDonough, and the rather badass Byung-hun Lee (G.I Joe) – Frank’s old friend Victoria (Helen Mirren) has been instructed by MI5 to kill them both too. 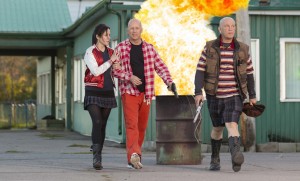 The obligatory walk away from explosion shot

In a race against time, Frank, Sarah and Marvin rush around the US, Russia and the UK on their trek to locate Nightshade, all while avoiding the contracted killers and swathes of grunts with semi-automatic weapons, or dispatching them in suitably silly ways.

Although relatively straightforward with few twists, the plot is well constructed with few holes and inconsistencies. The couple dynamic between Frank and Sarah is exploited well, with Marvin offering some idiotic-sounding, yet solid relationship advice; “If there’s one thing I know, it’s women and covert operations.”

The quick-witted dialogue is persistent throughout the film, and this is a welcome return – I loved the script in the first film, and there’s some great laugh-out-loud moments and one-liners uttered… Malcovich’s character steals nearly all of these, but I didn’t care because his timing and line-delivery is impeccable.

Some characters are a little dire – Catherine Zeta-Jones‘ “Russian” agent (her accent leaves a lot to be desired) and former flame of Frank’s seems solely placed in the movie as an antagonist for Frank & Sarah’s relationship, with little other reason for her to be around. When Anthony Hopkins‘ character makes his appearance, he’s very aloof, but it just seems a little forced. Hopkins is much more suited to the cold and calculating role rather than the mentally-unhinged extrovert, and unfortunately this comes across too much – even in the trailer with the “You’ve gotta be kidding me… put ’em up!”… it just made me put my head in my hands. You can do better, Sir. 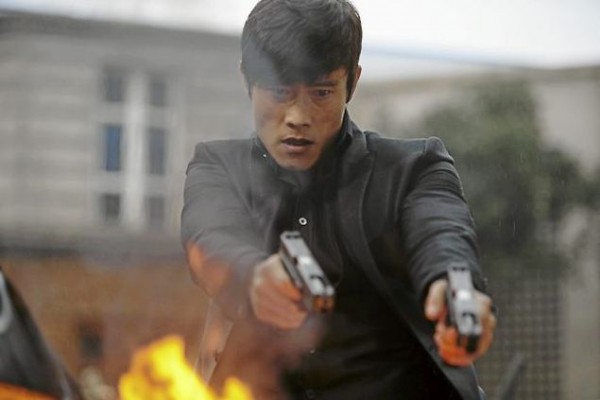 The action in the movie however is stellar – with some great chase scenes in some very nice cars around France, and some awesome martial arts choreography involving Byung-hun Lee that is reminiscent of Jackie Chan – he’s handcuffed to a freezer by Willis, and promptly rips the door off and beats the crap out of about 15 police officers before strolling out of the convenience store.

When it comes down to cinematography the film makes good use of sweeping cameras and slow motion, and thankfully it’s not done to death. One of the things I really didn’t like is that when there’s a drastic scene change, the image freezes and is “drawn” in Cully Hamner‘s  comicbook style, followed by a sweeping movement to the next scene – to me this was just screaming “LOOK AT ME! I’M A COMICBOOK MOVIE! LOVE MEEEEEE!”.

It made me think of the utterly retarded House of the Dead movie directed by that idiot Uwe Bol. (Interspersed with actual videogame footage – no, he’ll never live that shit down). It works for the more eccentric comicbook movies like Tank Girl… it doesn’t here. The first movie stood up on it’s own without having to blatantly and directly reference the comic… so why do it now?

Were you aware Red 2 was a comicbook movie? You will be now – whether you like it or not!

The links to Cully Hamner and Warren Ellis‘ work are very prevalent in Red 2 – the opening credits are presented like a motion comic using the original source material… again, this is unnecessary. I’d expect that kind of style over the closing credits, but it really seemed like Dean Parisot was ramming it down our throats just a little.

My grumblings aside, I really enjoyed Red 2 – my pet peeve of the comicbook transitions didn’t detract from my overall enjoyment, and the fun factor is definitely exploited as much as possible. The action is enough to keep you on the edge of your seat, and the humour and slapstick moments keep you chuckling all the way to the end. Lacklustre performances from the Welshies (Hopkins and Zeta-Jones) also don’t ruin the film, as they are mercilfully spared screen time in favour of the main protagonists.

All in all Red 2 is worth your time, and especially so if you enjoyed it’s predecessor, and/or are a fan of any of the involved actors. I’m still itching to read the graphic novels, and the small sections I disliked haven’t put me off that goal either. Personally I’m hoping that the best never will rest, and that there will be more to come from this franchise.

Movie and videogame geek, basketball player, guitarist, waffle connoisseur & expert in being a slacking bastard. You'll find me gaming on PS4 as "SpasmicPuppy" most of the time... I'm addicted to Destiny.
More Goodness
Actionbreakingbruce willis