Notorious murderer Riddick (Vin Diesel) is wounded and stranded on a desolate planet. Desperation drives him to activate a beacon found in a long abandoned mercenary waystation. With a bounty on his head, double if he’s dead it doesn’t take long for a response. Santana (Jordi Mollà) and his motley crew are soon joined by another crew lead by Boss Johns (Matt Nable) with the two both seeking the same prey for different reasons. Soon though they learn that there are scarier things than Riddick.

In the age of the mega franchise there’s something distinctly anachronistic about the Riddick films. This latest nearly 10 years after the last installment is a reminder of the days when it was more than just a couple of years between films (it was 7 years between Terminator and Terminator 2).

Vin Diesel is probably associated with another completely different franchise to lots of people, one that has made a ridiculous amount of money,The Fast and the Furious. Before this though it was Pitch Black that introduced both Diesel and the character of Riddick to film fans.

Writer/director David Twohy (the man behind both previous films in another anachronistic touch) this time dials things down following the space opera, mythology and world building of Chronicles of Riddick. Diesel’s unmistakable gravel throated voice narrates as Riddick explains how he ended up in his current situation dubbed a ‘legendary bad day’. 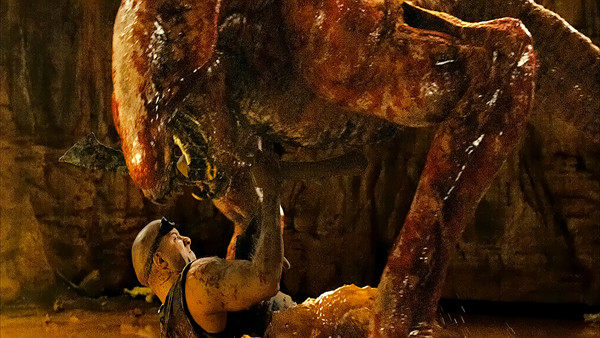 Riddick has a close encounter with the local wildlife.

Fans of the adventures of Riddick will no doubt be wondering how he went from becoming Lord Marshal of the Necromongers to being half dead and stranded on a strange planet. This is handled well and it’s good to see that whilst there are some good connections between Riddick, The Chronicles of Riddick and Pitch Black for fans, but having seen the previous films isn’t necessary as things are explained well.

Pitch Black was a distinctly pulpy sci-fi affair and this new outing for the anti-hero with the iconic eyes is even more in-line with this aesthetic.

Riddick is a film of three distinct acts. The first of these though will no doubt throw anyone who is expecting an all out action fest as it revolves around Riddick adapting and surviving on his new desolate ‘home’. As the Furyan explores the environment, a sun baked mountainous desert, and encounters several alien creatures. 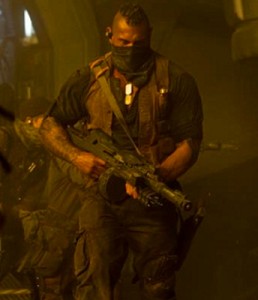 This establishes how hardy Riddick is – for the majority of this opening act the only company Riddick has is a dingo like creature he rescues as a puppy. A fade to a much larger adult ‘dingo’ is a neat indicator of time passing without the need for clumsy on screen captions. The desert nomad look is a new one for Riddick too which works well.

It’s not until the second act that other characters that feature in the story appear. The contrast between the sleazy, nefarious and clearly somewhat inept Santanna, who is blatantly made out as being a nasty piece of work with a taste for rape and torture and his crew, featuring Dave Batista (soon to be seen as Drax The Destroyer) as the hulking Diaz (who is actually a source of some dry comedic touches) amongst others and Johns more reserved and calm manner along with his more professional crew with the standout being Katee Sackhoff as Dahl a headstrong sniper works really well.

Riddick himself is largely absent for the second act which rather than being a problem works really well. The first act establishes that he knows his way around this environment but the mercenaries are new to this planet. Both from a character perspective, Riddick enjoys instilling fear in his prey, it also asserts his alpha male dominance and narrative perspective showing too much of a hidden danger drains any tension having Riddick largely absent makes things work. One scene revolving around the contents a locker is a prime example of this and a standout moment.

Whilst Riddick may be the alpha male predator looming over the mercernaries, another powerplay between Santanna and Johns is also occuring, with Johns stating early on ‘I won’t help until you ask for it’ and watching Santanna as he realises how much out of his depth he really is which is aided by some intentionally bad dialogue. Most of the mercs are just stock characters, in the 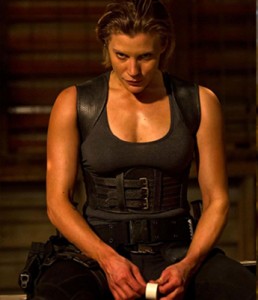 There’s some neat equipment on display but rather than being all shiny and slick the mercenaries tech has a more beat up and rugged look especially Santanna’s crew. A perimeter defence system referred to as a ‘Cyclops’ becomes an integral part of the story and there’s some rather mean looking jetbikes which feature too which have a Sons of Anarchy in space vibe to them which really fits in with the dustbowl colours throughout .

The third act takes the concept of Pitch Black and plays with it and is where most of the action comes in with some impressive set pieces and visuals coming into play as the prey realise they need the hunter if they want to survive.

One of the key things here is that Riddick isn’t a nice guy and is not a generic square jawed hero. It’s easy to forget the essence of the anti-hero. Riddick is a notorious murderer and criminal with his own mixed up moral code and generally only helps others for his own benefit rather than out of altruism and there’s one moment of gleefull ultraviolence that not only stands out for its brutality but is also blackly comical which hammers this home.

It’s a great credit to Diesel’s portrayal and clear love of the character that Riddick in chains and surrounded by enemies is even more intimidating than when he is free.

There are problems though, mainly Katee Sackhoff seems a bit wasted considering how well she does with what she is given, one scene with Santanna is a brilliant inversion of the norm, even if it isn’t that much of a stretch from her role as Starbuck in Battlestar Galactica. A scene towards the end though really goes against the grain of the character of Dahl that was established earlier too.

As pulp sci-fi hi-jinks go Riddick is an enjoyable adventure but those expecting an all out actionfest will be left a bit bewildered.

Andy Haigh started writing to counteract the brain atrophying effects of Retail Hell, now it's an addiction. Andy is an unrepentant sequential art absorbist and comics are one of his passions. Other interests include Film, Music, Science Fiction and Horror novels and quality TV like Game of Thrones. He can talk about these at great length if only someone would listen. He lives a somewhat hermit like life in The Shire, spends too much time on social media and is still waiting to go on an adventure.
More Goodness
breakingCinemaDave Bautista