previous
The Road to 2049: An Anthology of Short Films
random
next
Cosplay from SFW in the City
Film and TV
0 likes

Sylvester McCoy, James Cosmo and Darth Elvis were on fine form, and their presence alone justified the ticket entry. As one person commented; “Saturday left me in my happy place.”

The venue felt sparse at times, and the lack of performers walking about lessened the carnivalesque atmosphere that many associate with Sci Fi Weekender. The focus on Saturday also left the weekend unbalanced.

SFW in the City could be best described as a rough diamond. As a first-time event, it succeeded in creating a great weekend that carries with it the potential to be a truly fantastic addition to the Sci Fi Weekender family.

Sci-Fi Weekender (SFW), the UK’s only science-fiction festival and the largest in Europe, has always experimented with its format and strived to be unique.  Hence, it was no surprise when SFW in the City was announced as a satellite event to the main festival.

Rather than the usual three-day event, spread across a holiday park, SFW in the City was intended to be a more condensed version of the SFW experience, held over two days in a single venue, namely the O2 Academy in Sheffield.  However, the rooms close proximity to each other meant that there was some background noise during the Q&A sessions.

Everything that we have come to expect from SFW was there, but on a smaller scale.  The usual Main Void, Spaceport and Timeport areas were all spread throughout the venue, whilst a VIP area was set aside in the upper tier of the Main Void. 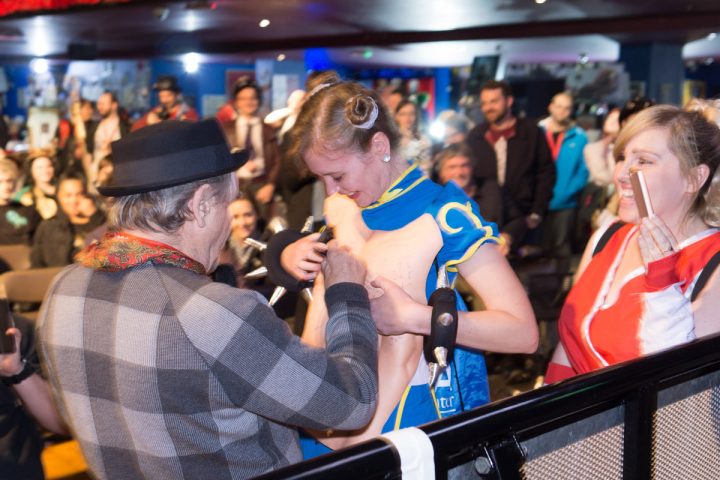 Headlining the event were Sylvester McCoy (Seventh Doctor of Doctor Who, Radagast the Brown from The Hobbit and Old Man of Hoy in Sense8), James Cosmo (Jeor Mormont from Game of Thrones and Angus Macleod in Highlander) and Julian Glover (General Veers in Star Wars: The Empire Strikes Back and Walter Donovan in Indiana Jones and the Last Crusade). All were on top form.  Sylvester McCoy entertained the audience during his Q&A with his warmth and humour, whilst James Cosmo was at his amusingly pragmatic best.

The evening’s entertainment commenced with the ‘Imaginarium’, which was a low-key affair.  Those expecting SFW’s usual pyrotechnic displays and robots might have been disappointed.  Nonetheless, the opening magician was entertaining, and the BMX performers were impressive.

However, following the Imaginarium and headlining the evening’s entertainment was the Star Wars themed Elvis tribute band Darth Elvis and the Imperials, who played a fantastic set of rock and roll classics.  You have not lived until you have heard “You ain’t nothing but a nerf herder.” 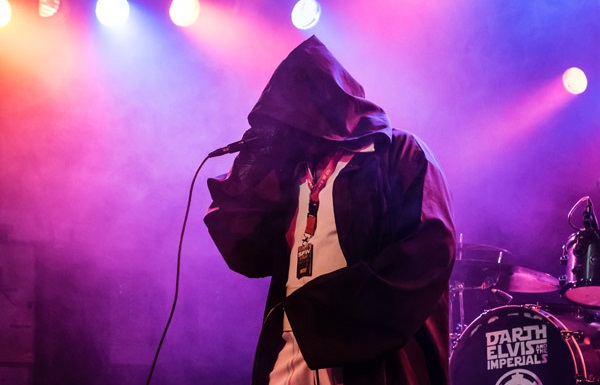 Rounding off the night was the DJ Level-Up Leroy, who played a variety of sci-fi fuelled rock and pop classics.  The music may not have been to everyone’s taste, but the atmosphere was infectious and Leroy soon had even the most reserved member of the audience bouncing around.

What was surprising was there seemed to be fewer people in the evening.  This was a shame as they missed what some considered the highlight of the event.  This could have been down to any newcomer’s expectations of conventions being day-only affairs.  However, the evening entertainment was well publicised with a schedule accompanying the booking emails.

Most of the event was focused on the Saturday, when Sylvester McCoy, James Cosmo and Julian Glover were appearing.  This left Sunday feeling comparatively sparse, and there was a distinct sense of winding down.

To have skipped the Sunday would have been a disservice, as the Cosplay Competition was pretty entertaining.  This was mostly due to the hosting by Jimcredible and Strange Porcelain, who compensated for the various technical hitches by being so damn entertaining, they kept the momentum throughout the competition.

Absent from SFW in the City were the mingling performers and stilt-walkers that have always lent a fantastical frisson to the proceedings at SFW.  A consequence of this was that attendees did not feel as compelled to dress up for the event, further lessening the carnivalesque atmosphere. 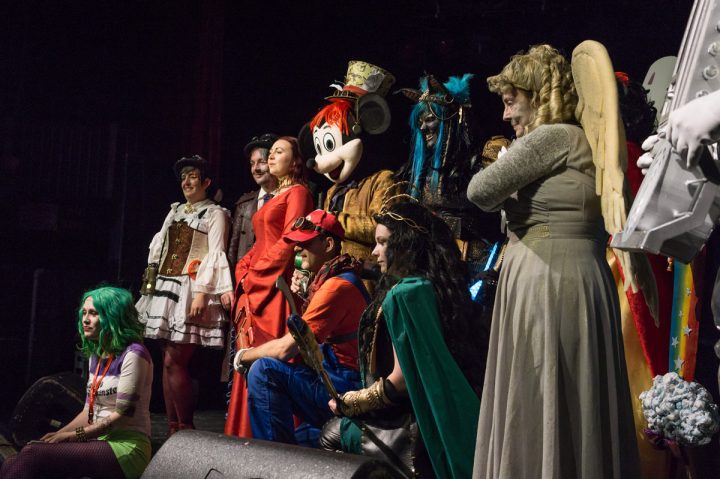 There also seemed to be a small author turnout at the event.  Sam Stone, Bryony Pierce and Raven Dane were as entertaining and informative as always, but more variety would have been appreciated.  There also seemed to be some repetition, as the comic artist Mike Collins was interviewed twice.  However, as there were often various talks and interviews taking place concurrently throughout the weekend, this is perhaps no bad thing.

Bar and food prices were higher than you would expect, but these are not the sort of events where people go to drink anyway.  Also, there were several restaurants, nearby, including, a rather excellent Chinese just across the road from the venue.

SFW in the City was a fun weekend and carries within it the potential to be a truly amazing complement to the Sci Fi Weekender festival.  Whether it will be developed with greater resources being invested, or even by being condensed to a single-day event, remains to be seen.  Hopefully, SFW in the City will continue and stand alongside SFW as being for those who want more than just  sci-fi conventions.

Science Fiction: the final frontier. These are the articles of the freelance journalist Peter Ray Allison. His continuing mission: to explore strange new realms of fiction, to seek out new genres and new visions of the future, to boldly geek where no one has geeked before.
More Goodness
conventioncosplayDarth Elvis