previous
Much Ado About Nothing - Joss Whedon
random
next
Thor: The Dark World
Film and TV
0 likes

As we have seen, in 1960 the foundations of what would become the slasher film genre were laid down by the influential British film-makers Alfred Hitchcock and Michael Powell in their respective masterpieces Psycho and Peeping Tom. Each film comprised many of the key slasher tropes, such as inventive methods of murder, the past trauma which influences the actions of the killer, and the murderer’s disturbing relationships with their own family. These two movies are in many ways the cornerstones of the slasher, and so in spite of the intrigue of possible earlier archetypes like Terror Aboard, it is a sound claim to make that 1960 was the year in which the slasher genre truly began.

There is another film from that year which holds a certain level of significance for the genre. Not a horror movie, but a poignant examination of faith and human cruelty from one of cinema’s greatest directors. The Virgin Spring is not a slasher film, but I feel it is worth discussing before we move on from 1960 because I believe it is the final piece of the foundation, the third building block alongside those two great British works, from which the entire genre spring-boarded.

There is first of all the obvious reason why this movie is significant to the slasher film genre. In due time we will be looking at an early collaboration between slasher icons Wes Craven and Sean Cunningham called The Last House on the Left, a controversial exploitation work of the 1970s which earned the contempt of critics and the revulsion of those who appointed themselves cinema’s moral guardians. This video nasty was a reworking of The Virgin Spring, and so as a piece of direct source material for a later work of the early slasher canon, this film is definitely significant. 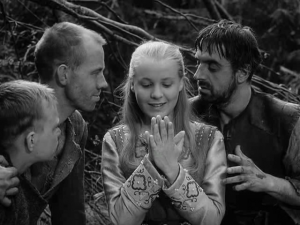 The movie tells the story of an innocent young woman who is raped and murdered by a group of men who then wind up inadvertently seeking shelter at the home of their victim’s parents, thus instigating an act of brutal revenge. Typically for an Ingmar Bergman story, the film is heavy in religious symbolism, as the morality of all of the character’s actions are debated against the ambiguous question of the presence of God. This film can be seen as a starting point for the much maligned rape-revenge genre, an area of cinematic exploitation which like the slasher was to encounter much indignation and scorn in the coming years.

The reason I believe that Bergman’s film completes the foundation established by Hitchcock and Powell, is the dominant theme of innocence lost. Psycho and Peeping Tom may have presented many of the key slasher tropes and themes, but I would argue that neither of them captured this principle theme of the genre quite like Bergman did. 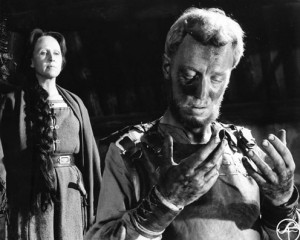 The recurring denouement of a slasher is the halting of a murderer by the survivor, a person of innocence and purity who was able to overpower the great evil but at the price of losing that innocence. The Virgin Spring does not present the theme exactly as it would become recurrent in the slasher film, but like Psycho and Peeping Tom it does demonstrate an archetype which the later slashers would vary and build upon.

When I was planning my discussion of the influence of 1960 on the slasher film I considered The Virgin Spring to be an interesting extra, a film which would later be remade into an early slasher and so perhaps a nice bit of trivia to enjoy. Now that I have watched the film I am convinced that it is much more important than that; that like Hitchcock and Powell’s works it represents the true origins of the whole genre. To understand the slasher, I feel that you must watch all three of these great works of 1960, for once you do you will find that just about all of the slasher’s key elements hark back to them.

We have seen the slasher’s thematic tropes established, next week we shall see where its visceral visuals came from. It’s going to get bloody…

Prolific writer attempting to slowly take over the internet through various explorations of cinema, heavy music and everything in between.
More Goodness
1960Alfred Hitchcockbreaking