On the 8th September 1966 television viewers we’re invited to “boldly go where no man goes before.” Over the next 50 years STAR TREK would grow from mere sci fi tv show to something much much more.

With 726 episodes spanning over 6 separate series and 13 feature length movies it would take a newcomer to the franchise approximately 593 and a half hours to watch everything considered canon. With the arrival of Trek on Netflix that could be a possibility however such an endeavor would be staggering even for the hardiest of Trekkies.

In short there is a lot of Trek to get through but Geek Pride has plucked out the cream of the crop. These are wildly considered to be some of the best TV episodes from the franchise and in our opinion some of the finest moments in TV history.*

We know we’re courting controversy with some of our choices but we feel these give non fans a good a guide for them to dip their toes in the water. Feel free to add suggestions in the comments below.

WARNING: There are minor SPOILERS within. 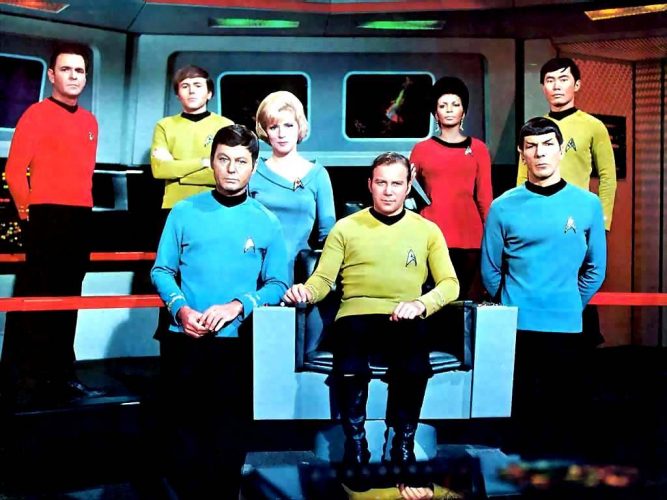 Space, the final frontier. Kirk, Spock, Bones, The Enterprise, Phasers, Tricorders, Transporters, Klingons, Romulans, Giant Green Space Hand. This is where it all began. Whilst the sets and special FX look ropy compared to today’s standards the stories and the characterisations have endured over five decades.

Some of sci-fi’s greatest writers making Trek much more than just another Sci-Fi show. Tackling issues such as racial segregation, war and social injustice at a time of rigid censorship gave the original series the classic status it enjoys to this day.

It gave birth to modern day fandom as we know it with Trek conventions springing up in the early 70’s. It inspired technology, gave us such memorable catch phrases (Live Long and Prosper, He’s Dead Jim etc) and is consistently referenced in popular culture the world over. This is the daddy of them all. Welcome to the final frontier.

Where No Man has Gone Before (S1-E2)– The 2nd pilot and the first with William Shatner as James T Kirk. The captain role had originally been portrayed by Jeffery Hunter who left after the first pilot failed to impress network executives. Only Leonard Nimoy stayed on as science officer Spock. This was the episode that convinced NBC execs to pick up the show after seeing the potential for more action based plots.

Balance of Terror  (S1-E14)– First episode to feature the infamous Romulans. This is a tense episode, reminiscent of Sub hunter films of WW2. Two ships locked in a cat and mouse game of deception and cunning.

Space Seed – Kirk and the gang awake a sleeping group of super humans only to find they have ambitions to take over the ship and possibly the rest of the galaxy. Would this be the last time we hear from them? Notable for its bravado acting from Ricardo Montalban.

The Trouble With Tribbles (S2 – E15)– The only comedy episode of Trek and a huge fan favourite. Here the Enterprise is overrun by little furry balls of fluff that multiply in the thousands. We will revisit Station K7 in the future as you will see later in this list.

Mirror, Mirror  (S2 E4)– A transporter accident sends Kirk and co into a Mirror universe where good is bad and the benevolent Federation is replaced by the evil Terran Empire. Remember if Spock has a beard it means he’s evil.

The City of the Edge of Forever – (S1-E28) Considered to be one of the most emotional original episodes. Look out for a young Joan Collins who of course plays one of Kirk’s many love interests. 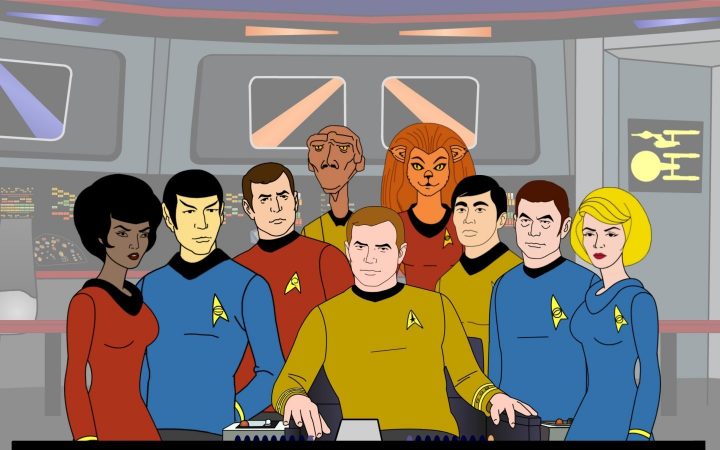 Produced by Gene Roddenberry with the original crop of writers and cast members, this series is not considered to be canon however this author believes that it is true Trek, the season 4 that never was, the fifth year of the five year mission. In other words “if it walks like a duck…” Whilst only 20 mins in length each episode allowed the writers and animators more freedom to come up with more far out and exciting environments and aliens to explore and meet. This is Saturday morning Star Trek.

Yesteryear (E2)– The crew meet the guardian of forever yet again and travel back to see a younger Spock.

The Time Trap (E12)– The Enterprise encounter a Bermuda triangle of sorts in space and meet people who may not be willing to leave their gilded cages! 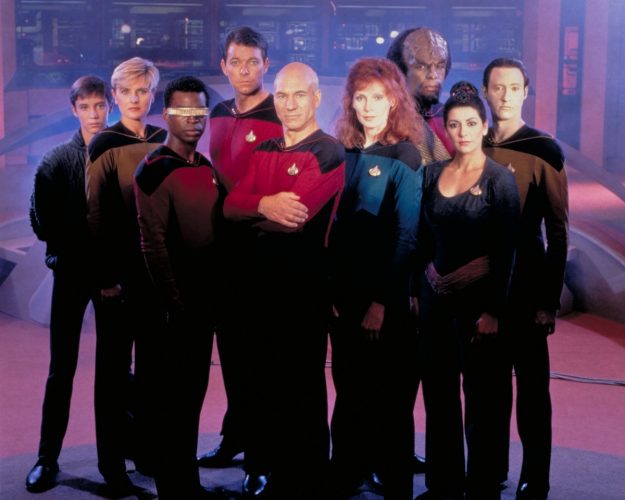 Set 100 years further from the original series we follow the adventures of the Enterprise D and her crew.

Captained by none other than Jean Luc Picard played by the Shakespearean Patrick Stewart and considered to be the finest of the franchise spin off’s. TNG was theoretically in the works when Paramount green lit a new Star Trek series known as Phase II back in the mid 70’s. However a move towards the motion pictures stalled Treks return to the small screen until 1987.

Groundbreaking in it’s use of special FX, set design and alien creature makeup, TNG does suffer from a rather stilted first season. However, once Riker grows his beard in Season 2 things get a lot better with the show finding its legs and building upon the already rich universe established by its predecessor. Here’s some of the best.

Yesterdays Enterprise (S3 E15)– The Enterprise D encounters a ghost from its past which has dire consequences for the future of everyone.

The Best of Both World Part 1-2 (S3 E26)– The classic Borg episode which provided one of the most intense end of series cliff hangers in TV history.

The Inner Light (S5 E25)– Can’t praise this enough. When they say they don’t make TV like this they are right. Amazing high concept for a 40 min show.

Darmok (S5-E2_- Classic TNG episode has Picard down on the surface with an alien that talks in metaphors. Interesting take on alien linqustics. All together now “Darmok and Jalad at Tanagra”!!!

All Good Things (S7-E25)– The Next Generations swansong but one of the best TV finales ever written. 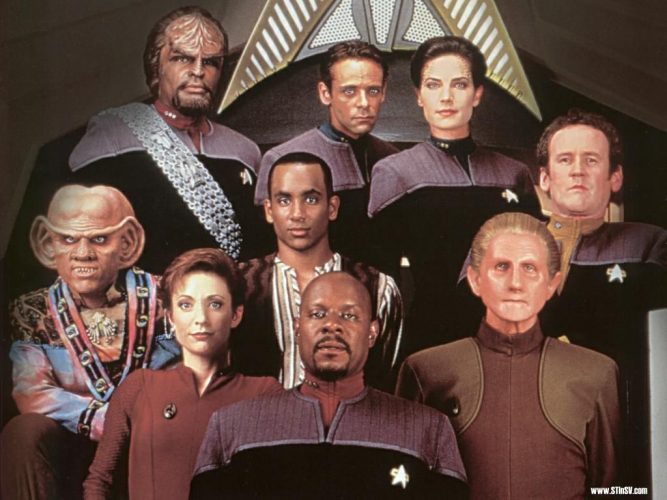 Set on an occupied Cardassian space station in a disputed territory, DS9 features Ben Sisko as the first African American protagonist and is the most political and layered series of them all. It has a huge war and shifting loyalties throughout and is this authors favourite of all the series due to the darker plot arcs and the huge ensemble cast. There’s a lot of great stories in this but here’s some of the essentials.

Emissary (S1 E1)– The first episode sets the tone and the story for the next seven seasons. Not the best episode ever but lays out the foundations for some of the more complex plotlines that develop throughout.

Trials and Tribbleations  (S5-E6)– The episode that got me into Star Trek! Produced as part of Trek’s 30th anniversary in 1996 the cast of DS9 go back in time to meet some familiar heroes. This episode appears in top ten lists for best trek episode EVER!!!

Our Man Bashir (S4 -E10)– You’ve heard of Holodecks? This is a brilliant episode that sends up the 60’s James Bond films. Sci fi meets SPY-fi!

Far Beyond the Stars (S6 E13)– Imagine Trek was all in the head of a writer back in the 50’s. This episode pushed boundaries of the show so far off the edge. A sci fi classic in it’s own right.

In the Pale Moon Light (S6 E19)– Some say this is the most morally dubious episodes of the entire Trek series but all’s fair in love and war don’t they say. 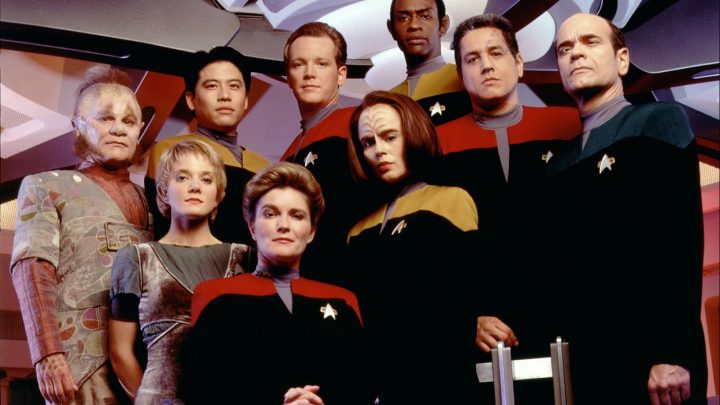 Trek by the mid 90’s was on a roll and had overlapping shows being produced at the same time. This time the premise is back on a Federation star ship captained by the stoic Katheryn Janeway, stranded 70,000 light years away in the Delta Quadrant with a band of rebels trying to get home. Considered by many to be a weaker series there are none the less great gems to pluck out from the show. And like the two previous Trek series it really gets it’s space fearing legs three seasons in.

Caretaker (S1-E1)– The first one is a good premier. Introduces the characters and sets out the dilemma that the cast has to face with their perilous journey back home.

Scorpion Part 1/2 (S3 E26)– The Crew face the Borg in their neck of the woods. Outnumbered and outgunned by a billion to one Janeway finds out that an alliance is needed to stave off an even bigger threat that the Borg themselves and save an assimilated human in the process.

Year of Hell (S4 E8)– Who said getting back to earth was easy?! This episode has Voyager pitted against a ruthless alien race that will stop at nothing to change the course of history for its own gains.

Message in a bottle (S4 E14)– Voyager stumbles across an ancient communications network. With only one member of the crew being able to travel through to get a message back to earth they have to take a chance or Starfleet may never know what has happened to them.

Blink of an eye– (S6 E12) Brilliant high concept Sci-Fi. The crew encounter a planet that exists on a different time plain to them where minutes on the ship are decades on the surface. 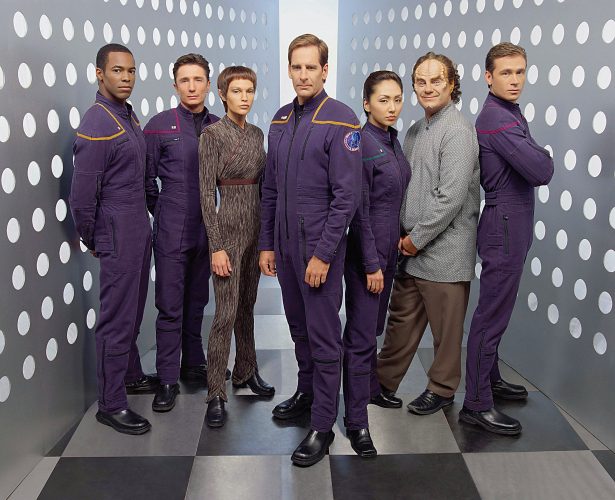 Set 100 years before the adventures of Kirk and the Federation this is a prequel to Trek, showing the humble origins of mans first steps into the galaxy beyond. Only lasting 4 seasons many fans felt this was Trek trying to overreach itself. It’s not perfect but has some great moments.

Like DS9, it had huge season spanning plot arcs that made the show hard to follow if you weren’t an ardent follower. Avoid the season finale at all costs.

Broken Bow (S1 E1)– First one of the season. Good intro for the characters and the overall show.

First Flight  (S2 E24)– shows how Warp drive was being developed into the Starships we see in the later episodes.

Affliction/Divergence (S4 E15) – This episode explains one of Trek’s great continuity issues with the Klingons. 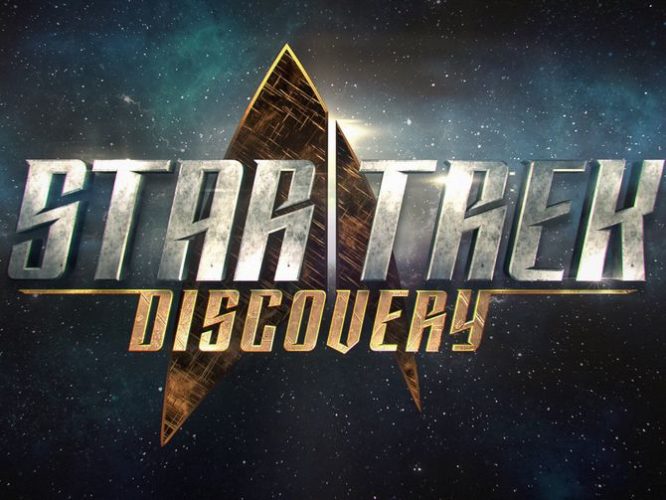 At the time of writing this piece all we know that Bryan Fuller is producing a new Trek series that will take place in the prime universe, take place some years before the Original Series and feature a main character called Number One. As if you did’t have enough Trek to watch there’s gonna be more, this time streaming right to your home via Netflix in the UK and CBS online in the US. Frankly I can’t wait and Geek Pride  will be there giving you all the coverage there is.

In Part 2 we’ll be looking at the Beginners Guide to the Star Trek movies. But for now that’s plenty of Trek to get through. Enjoy and remember to Live Long and Prosper!