Video: Ryan Reynolds Nails it in ‘How Deadpool Spent Halloween’ 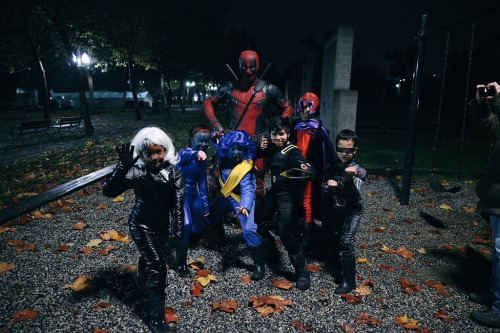 We all know that Ryan Reynolds won Halloween by adorning himself in his official film Deadpool costume and hanging with a team of mini X-Men trick or treating. Now he has released a video of that evening and it is just brilliant. For anyone still dubious as to whether Ryan Reynolds can pull off the Merc with a Mouth in the coming Deadpool film, firstly, what are you crazy? and secondly, even in a this situation, surrounded by children, he stays in character. Let’s be honest, he’s pulled it out the bag and smeared it across doubting face. Just watch the video and see.

And because it is just that good, here have the official Deadpool trailer again.

Editor and occasional writer for Geek Pride! I prefer Star Trek over Star Wars, collect comics and wish I could be a superhero one day. I tabletop RPG as well as a little gaming, design the odd t-shirt now and again, update my Geek Parenting Tumblr and when I have cash to spend (which is rare) I scour the internet for Wonder Woman collectables. Also Doctor Who and Firefly rock!!
More Goodness
CyclopsDeadpoolfunny