IT’S NOT THE WAR WE KNOW. IT’S THE WAR THEY FOUGHT.

Two years after setting the new standard in war combat documentaries with its Emmy®-winning masterpiece WWII Lost Films, HISTORY™ shifts its focus to a different generation and to one of the most controversial wars in American history.

Narrated by Emmy®-nominated actor Michael C. Hall (Dexter) – VIETNAM LOST FILMS captures the sights, the sounds and the stories of the Vietnam War through intimate and revealing interviews with 13 people who experienced the war first-hand.

The perspective separates the war from the warriors as never before. Featuring rarely seen footage detailing critical turning points in the Vietnam War combined with powerful storytelling to create a deeply immersive experience. It features home movies and rare archival footage collected during a worldwide search.

Straight to the point: Dramatic, insightful, sad, uncomfortable: The best Vietnam Documentary made to date, bar none. 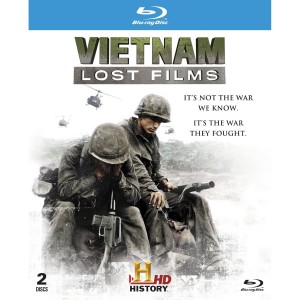 The narrator – Narrated by Michael Hall of Dexter fame, his low key, understated narration accompanies and compliments the footage and doesn’t overwhelm it like a lot of other documentaries.

Beautifully put together and produced – This series has been so lovingly and skilfully crafted that every sound effect, interview, bit of video footage and music is seamlessly melded together to accentuate the story as it is told. The chaos of the battle footage and the sound effects that go with it are complimented by their antithesis,  the serene, steady cam and silence of the interviews; camera work and composition that I believe added depth and warmth to the characters as they told their stories.

The reality of war and the uncomfortable truth –  The footage that is used, and the way it is spliced together, gives you a true sense of reality, with some truly horrific  scenes of dead and dying soldiers with all matter of wounds. Added to this the interviews with the ‘Vets,’ synched in with their memoirs and diaries (voice  acted) just hits home with the human factor of the war and in a couple of places actually brought a tear to my eye.

I found it extremely uncomfortable to watch in some parts and really made me think about my views on warfare in general. It’s not romantic, it’s not pretty and I don’t think I would have been able to deal with the trauma and horror of it myself had I been drafted; something until now I always imagined I would be able to do.

Stats and facts – In between each segment there are statistics about the battles and the war itself, stats thatI’ve seen before and thought little of, but for some reason I took note this time the sombre music, the narration and the interviews gave life to these figures and every number became a person, really hitting home the sheer scale of the war and making it more uncomfortable to watch; not a bad thing at all.

v  The average combat experience of a soldier in WW2 was 10 days; in Vietnam it was 240 days!

A war won in the field but lost at home – The Vietnam War is classed as one of Americas biggest defeats and this something that is very hard for some in the States to stomach. They have had such an illustrious history of which, losing was  not generally part of it and to accept a loss when , on paper, they were winning and by great numbers, is a bitter pill to take.

All you have to do is look at the stats above to see this. For every American casualty there were 11 NVA/VC casualties! Figures that speak for themselves and to most strategists and armchair generals, figures that should have pointed in the direction of victory; and would have, had they been able to continue.

Sadly The Vietnam War was one of the first to be fully televised, with no censorship on the press, meaning that every bullet fired and casualty taken was being beamed back to a nervous American public; Inevitably bringing a very real war to their doorstep and becoming the death nail in the American War effort. It is this aspect that this series talks about and shows very well.

Some of the images I was seeing, when watching the series, were disturbing me and this is was 30 odd years later, How must people at the time, sitting down to their evening meals have felt?

I have none, not one nit to pick at all, I thought it was that good!

Honestly the best documentary I have seen in a long time. I wasn’t expecting much as I have seen more Vietnam documentaries than I care to imagine BUT this really shook things up and gave a genuinely harder edge to a subject in very well trodden ground.

Instead of relying on over the top action, cinematic CG and eccentric historians. Vietnam:  Lost Films plays on the Human factor with great, and in some cases, over powering effect. I’ll never look at the Vietnam War in the same way again