This is the fifth box in the Firefly Cargo Crate series, and this time, it’s dedicated to the ship herself, Serenity. Essentially the tenth member of the crew (and probably even more iconic), it’s fitting she’d get her own box. I’m excited to see what Loot Crate and QMx have put together this time around, so let’s dive in.

Up first is the sticker. 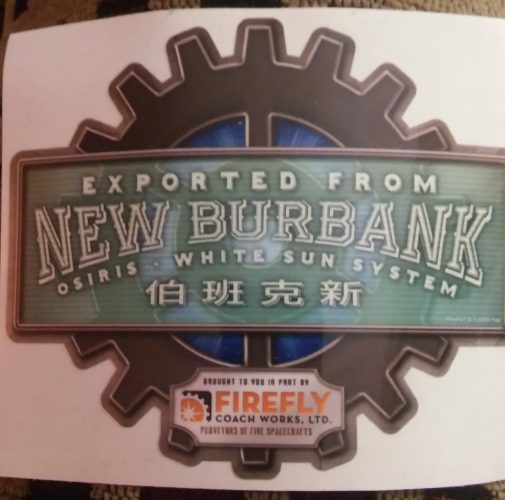 Not as cool as previous stickers I’ve received in these boxes, but I can’t complain too much. I hope some day I eventually have something worthwhile to put all of these stickers on. It’s a shame I don’t have anything good to display them on. Maybe a framed collage down the road? Hmmm…

Alright, onto item number 2. Another lapel pin to add to the collection. 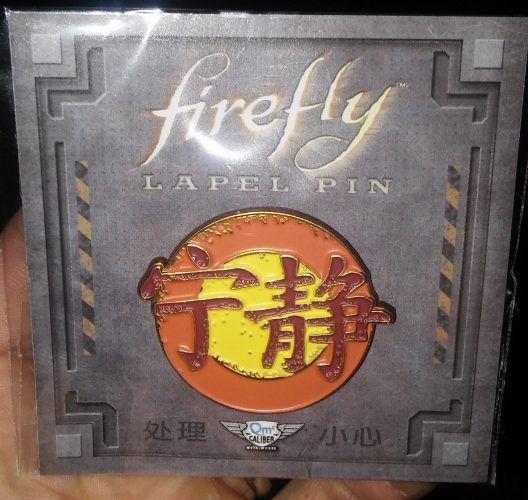 Fortunately, these pins are beautifully done, and this is no exception. It’s one of two versions of the iconic Serenity logo (the other, more common design shows the characters vertically instead of horizontally). Great colours and perfect detail. A fine addition to our ever-growing pin/button collection.

The third item is a luggage tag, displaying the show’s logo.

As I’ve said before, I don’t travel much, but with plans in motion to head to Canada in 2017, I should be able to make use of it, which is nice. You can’t take the sky from me this coming year.

I wasn’t sure what this item was exactly until I took the shrink wrap off. I figured it was a notebook or a day planner. 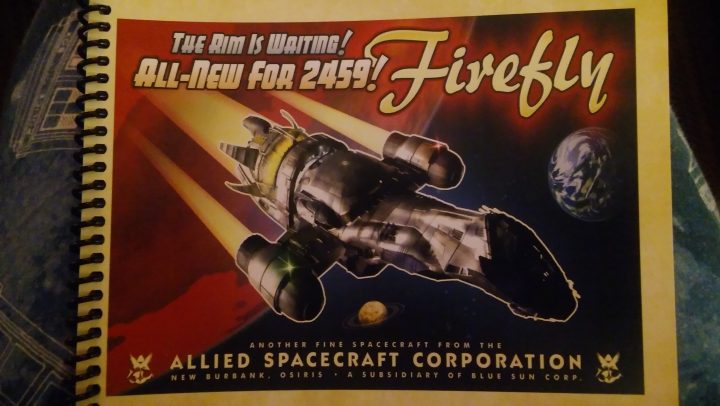 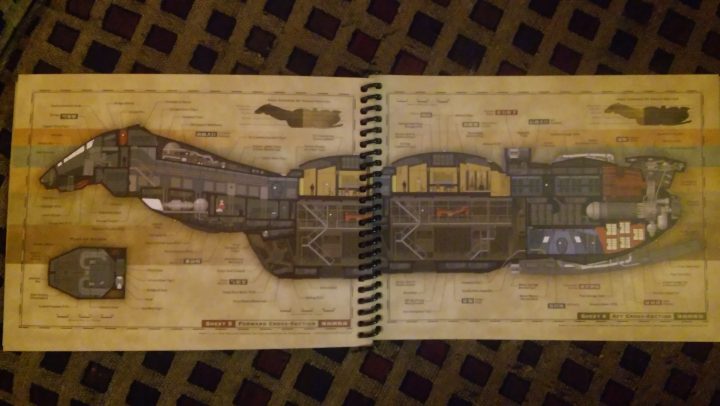 Once I opened it, I realized it’s essentially a book of tech specs for Serenity. The above page is just one example, but the rest of the book is filled with more detail on the ship’s layout, specifications, etc. Pretty cool collectible, and a nice piece for die-hard fans.

We’ve got a cargo label package this month. 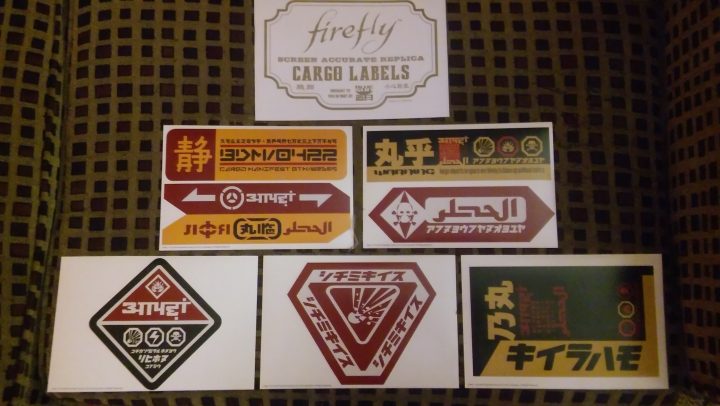 As you can see on the envelope (the top of the pyramid), these are screen-accurate, so the quality an detail is really good. Not a lot of use to be had here, though, other than maybe putting them in some frames and making artwork out of them. 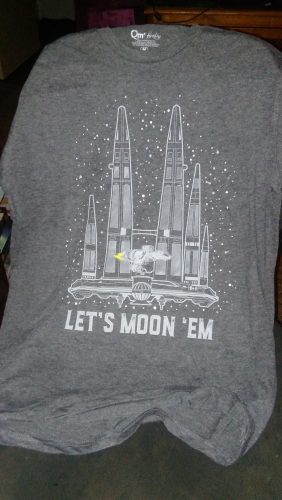 Alright…the saying is goofy and obviously a space pun, but the artwork more than makes up for it. If you can’t tell, it’s a drawing of Serenity flying past the Alliance Cruiser, a ship that is rarely seen on Firefly merchandise. I think it’s a very cool-looking ship and doesn’t get enough love from an aesthetic standpoint, so it’s nice to see it featured so prominently for once. Good work! 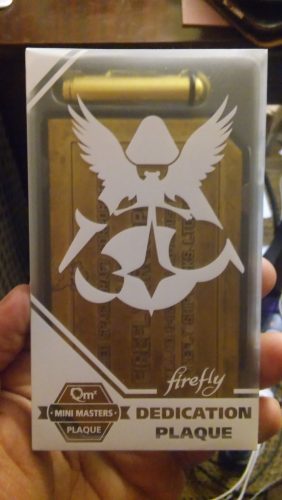 This is a dedication plaque for the ship. Let’s open it up and get a better look. 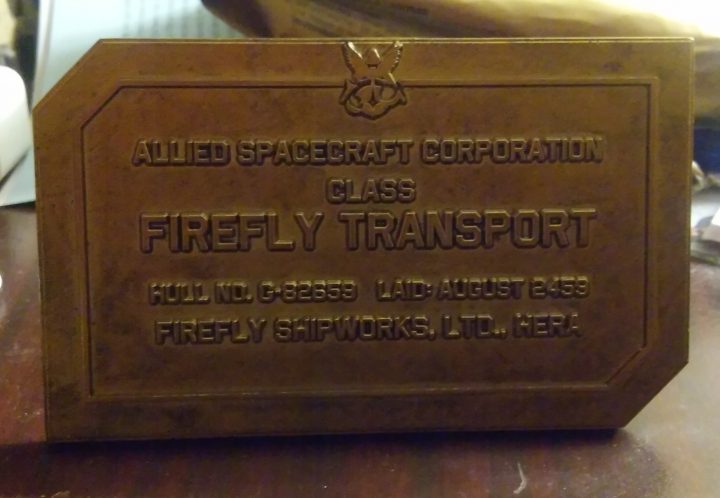 Beautiful. It appears to be screen-accurate and contains all the necessary details. It features a removable stand in the back (see first picture) so you can either display it on a desk or a wall, if you have a preference. And it’s a good, heavy-duty item, made entirely out of metal, so there should be no worry about it getting damaged. 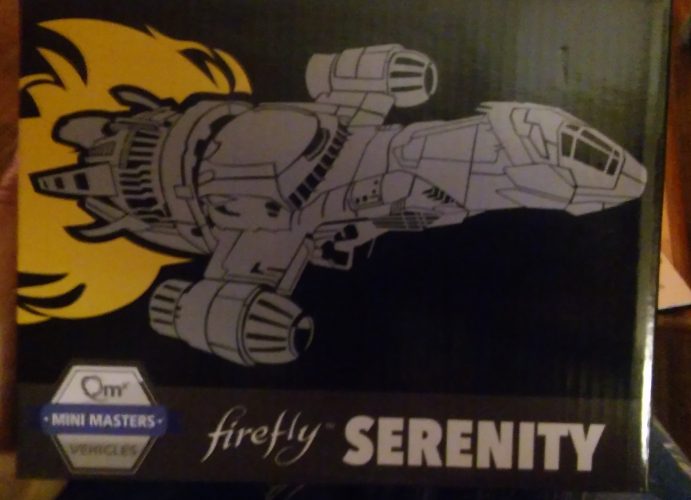 I have a feeling I’m really gonna like this. Let’s get a better look at what’s inside the box. 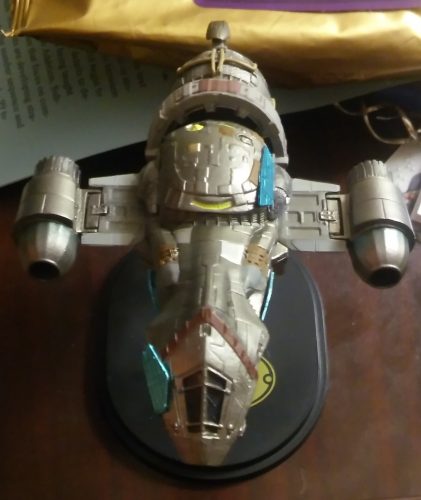 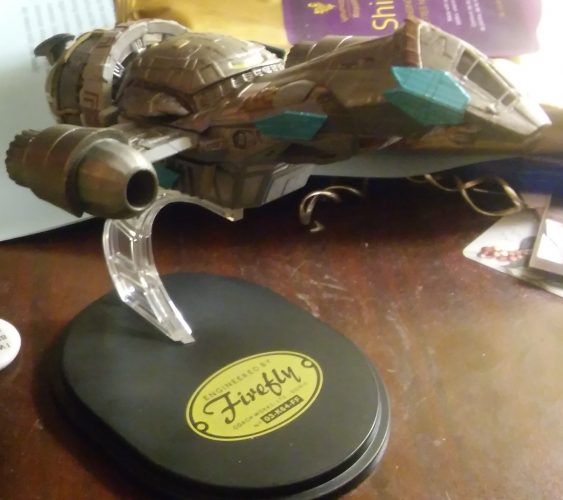 Once again, beautiful. The detail on here is outstanding and appears to have been hand-painted to boot. The base is a durable plastic, and the ship can be removed easily as a result of a magnet in the bottom, as opposed to being attached by posts. This will look great next to all of the crew figures I’ve received thus far. Eventually, I’m going to have to put together a nice shelf just for the set.

Overall, a pretty great crate, as was to be expected. QMx does it once again with their high quality, officially licensed collectibles. The quality overall varies from crate to crate, but they are never disappointing. I’m really happy with this selection, especially the miniature ship and plaque.

The next crate, which should be arriving next month (instead of in two months, per usual), should be VERY interesting, as the theme is YoSaffBridge. Yep, one of the most popular supporting characters is getting her own box. Definitely looking forward to that one.

I am straight edge and a freelance writer currently working for several sites. I also do personal training. Currently, you can see my weekly WWE Smackdown recaps on CamelClutchBlog.com, video game reviews on BurningAngel.com (warning: although I only write game reviews there, it is an adult entertainment site) and mostly wrestling-related stuff on Man Cave Daily (mancave.cbslocal.com).
You might also like
Box SubscriptionsfireflyLoot Crate