For the first time since Loot Crate and QMx started doing these, this month’s Firefly Cargo Crate is actually themed after a supporting character from the show instead of one of the main cast. And, they’ve got a crowd favourite, that being YoSaffBridge (a mash-up of her three aliases, Yolanda, Saffron and Bridgette), most commonly known as Saffron, played by the painfully gorgeous Christina Hendricks. Saffron was definitely one of my favourite recurring characters, so I’m excited to see what we’re getting this time around.

First up, a lapel pin. 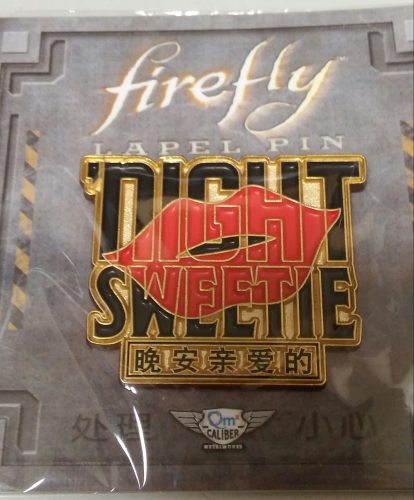 I love the pins QMx puts out for these boxes, and this is a nice one. It features the quote, “‘Night, sweetie” and a lipstick kiss, from Saffron’s first appearance on Firefly in the episode “Our Mrs. Reynolds”, where Mal accidentally winds up marrying Saffron, only to later find out she’s a fellow smuggler, trying to steal Serenity itself for her own crew.

Up next, we have the monthly t-shirt. 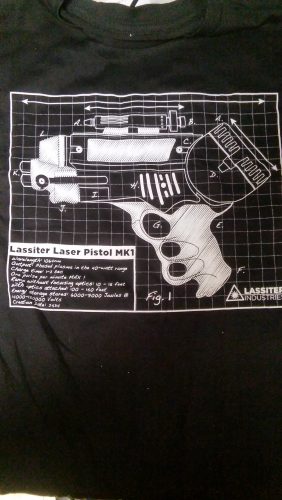 This features something a blueprint design (on a black shirt) of the famed Lassiter Laser Pistol, a favourite weapon among the Browncoats. This one appeared in probably my favourite episode, “Trash”, where Saffron and Mal attempt to steal the weapon from another of Saffron’s husbands who doesn’t know her true identity. I think it would have been better served on a blue shirt, but you take what you can get. It’s a nice design, and it will definitely get plenty of wear from Yours Truly.

Item number 3 is the monthly sticker. 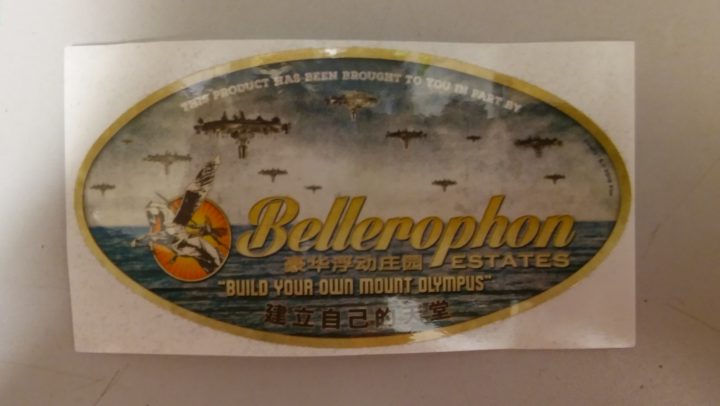 This one represents the planet Bellerophon, named after the arrogant hero in Greek mythology. Fitting, given that, in the show, the planet is home to some of the wealthiest folk in the entire ‘Verse. Bellerophon was home to the aforementioned Lassiter and was the main setting for the “Trash” episode. I like the design, but what more can you say about a sticker? Like I said in a previous review, eventually I’ll probably frame all of these in a collage.

We get a second batch of flashcards this month for item number 4. 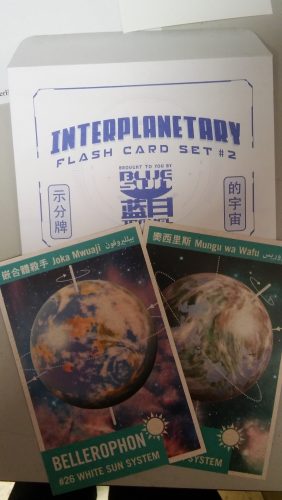 Similar to the last ones received, containing facts and stats about a selection of planets, including Bellerophon. Nothing special, but great for the Browncoats who want to know every last little bit of information on the ‘Verse.

Ah, the QBits blind-box figures are back! Let’s see who we get this month. 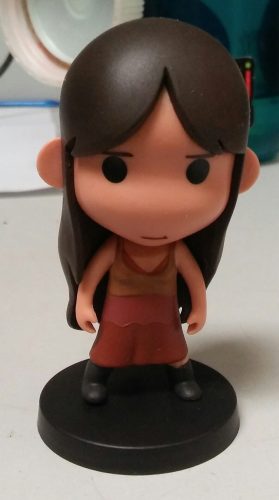 It’s everyone’s favourite tiny killing machine, none other than River Tam herself. This one will be added to my display with Jayne, Wash and Book (RIP, Ron). The possibilities were either River or Inara. Can’t really go wrong with either badass lady.

Now, this next item I found to be a bit disappointing, and I’ll explain why. 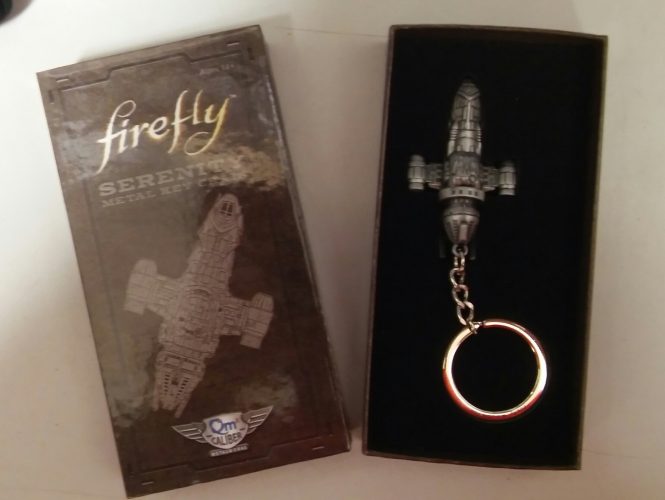 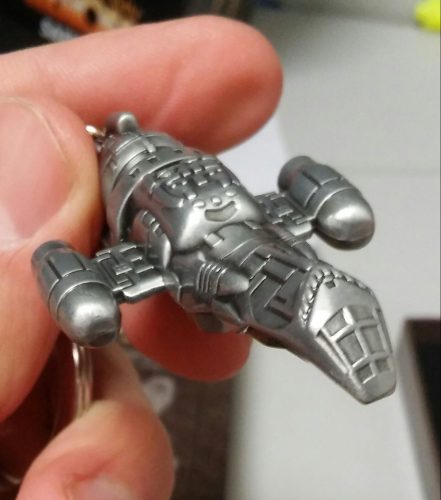 As you can see, it’s a Serenity keychain. It comes in a nice box, and once you take a look at it, it’s got great detail (and is surprisingly hefty in terms of weight). So why is it disappointing? For no other reason than not only do I already have one, but our household in fact has two. If you read my article on Denver CSTS (and let’s be honest, you probably didn’t), I got one in my ‘Verse ticket package, as did my wife. Don’t get me wrong, I love it (and no, I’m not selling one); I was just hoping for more items I didn’t already have. It’s a minor complaint, though, especially when it’s purely by chance that I already had it.

Finally, we get to my favourite item in these Crates, the Mini Masters Little Damn Heroes statues. 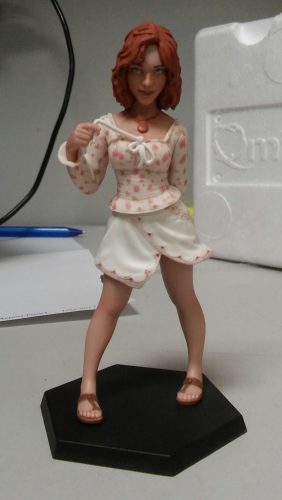 Outstanding likeness of our Mrs. Reynolds (yet another popular pet name among the Browncoats, for obvious reasons). I like that these statues are both cartoony and realistic at the same time. The detail is superb, with very careful attention paid to in regards to the colour, as always. This is going on the display with the rest of the Little Damn Heroes, Serenity and the gold-coloured plaque from last time.

Like always, great Crate. I have very little to complain about, and even those complaints are paltry. I would have liked the shirt to feature Saffron’s likeness (and come in a different colour), but at least it fit the theme and wasn’t just a random design.

Well, that’s all for this time. I’m not sure what the next theme will be, as I have not received the announcement email yet, but I’m sure it will be a good one. I’m going to guess Mal or possibly one of/both of the Tam siblings. Either way, should be good. See you in a couple of months!

I am straight edge and a freelance writer currently working for several sites. I also do personal training. Currently, you can see my weekly WWE Smackdown recaps on CamelClutchBlog.com, video game reviews on BurningAngel.com (warning: although I only write game reviews there, it is an adult entertainment site) and mostly wrestling-related stuff on Man Cave Daily (mancave.cbslocal.com).
You might also like
Box SubscriptionsfireflyLoot Crate