Game of Thrones: Breaker of Chains

Slightly delayed this week, but I’m back again with my third review and recap of Game of Thrones, season four. Firstly, it’s the usual drill, this article will be SPOILER city, so turn back now before it’s too late if you haven’t seen the episode. When discussing a particular scene from the episode I’m also going to make references to the way it differed in the book, but that won’t give away any further details of what is to come. Without further ado, I present you with my review of ‘Breaker of Chains’.

To some, this week’s episode was a little lack lustre following on from the dramatic events of last week’s ‘The Lion and the Rose’, which saw the murder of Joffrey, the wee prick. We see reactions to his death from those in King’s Landing, as well as updates on the journeys of Stannis Baratheon, Sansa, the Night’s Watch, Arya and the Hound, the Wildlings and Daenerys. Despite being overshadowed by last week’s offering, this sort of episode was both expected and necessary following the King’s death. 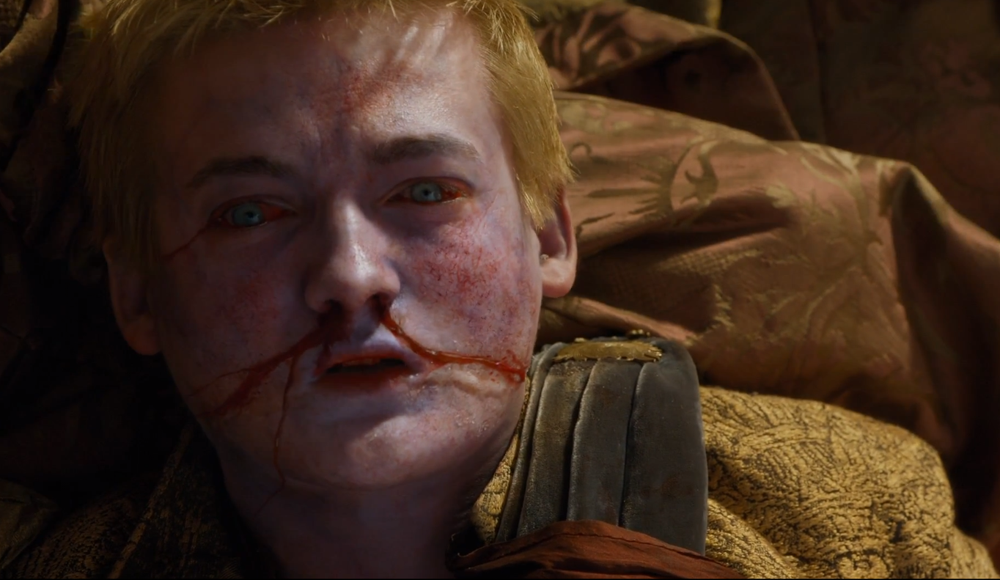 One would think that this week’s ‘Breaker of Chains’ would focus on Daenerys as she reaches slave city Meereen, but that’s left right until the end. In fact, we pick up exactly where last week left off, with everyone watching on as Joffrey snuffs it. Tyrion is the main suspect in the case, but as he himself comments, the only person in King’s Landing that he would not suspect is Cersei, who is usually rarely innocent when foul play is afoot. Tyrion is to stand trial and it’s easy to see why he is the main suspect, particularly as Joffrey’s final act was to point an accusing finger whilst turning a lovely shade of beetroot. During his final minutes last week I was actually expecting some sort of Violet Beauregarde moment, with him swelling up and floating off with Cersei clinging on for dear life. That would have been amusing, but I digress. 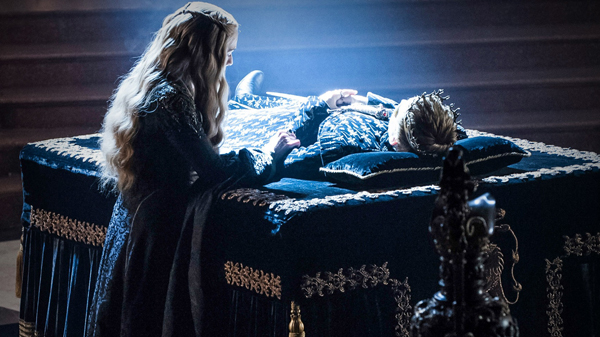 As Sansa makes it to her escape ship, Littlefinger is revealed as her true ‘saviour’, which definitely puts him in line as a suspect in Joffrey’s murder. The Tyrell’s have mixed views on the passing of the King, with Margaery disappointed that she didn’t quite make it to being Westeros’ new queen. Olenna Tyrell comments that the situation is better than it would have been if Margaery was to remain married to Joffrey, which once again points suspicions towards her. Tywin Lannister is another fellow that doesn’t seem too affected by the young King’s death, despite Joffrey being his own Grandson. He tells Tommen, heir to the Iron Throne, that Joffrey was not a good or wise king. He also comments that a wise king listen’s to their closest advisors, could this be an indication of foul play on Tywin’s part? After all, a younger and much less hell spawnish king would be more easily swayed – or manipulated. 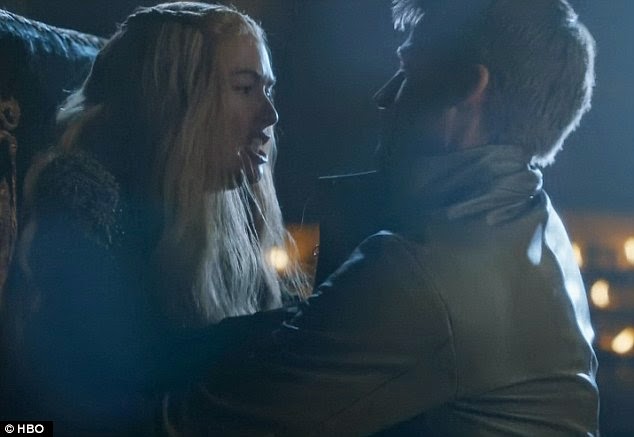 Now for Cersei and Jaime and the controversy surrounding their scene together as they are alone with Joffrey’s corpse. This scene has been heavily debated since the episode aired, not only because of the controversial nature, but also because of the way in which it differentiates from the original text. In fact, in the book, Jaime is not present at Joffrey’s death and is feared dead himself by Cersei and upon his return, she has been reunited with the father of her dead son as well as her lover/brother.

Now for the television adaptation, which has been described as a rape scene by many, but that was not necessarily the writers’ and director’s intention. In the book, Jaime eventually forces himself upon Cersei who is resistant to his advances at first, but quickly gives in to animalistic urges. Her comment ‘it’s not right’ is perhaps more related to the incestuous relationship between brother and sister, concerned that someone will catch them, rather than to the sex itself. However, in ‘Breaker of Chains’, it is more difficult to understand whether the this was consensual, or, if in fact, Jaime rapes Cersei next to the corpse of their dead son.

According to the episode director, Alex Graves, the sex is ‘consensual by the end’, an extremely awkward phrase which in itself brings about controversy. He comments that he hopes the audience didn’t miss some parts of the scene that suggest this and that ‘the consensual part of it was that she wraps her legs around him, and she’s holding on to the table, clearly not to escape but to get some grounding in what’s going on’. However, as Cersei says ‘it’s not right’, to which Jaime replies ‘I don’t care’, there is much room for debate.

Rather than continue to debate the matter, I’m going to focus on why we had this scene in the first place and why we see this side of Jaime after so much has been done to show off his more endearing qualities. The outright admittance of Joffrey as Jaime’s son reminds him of his relationship with Cersei, who has been incredibly cold to him since his return to King’s Landing. We’re reminded that Jaime is after all, a Lannister, but one that desperately tries to avoid his fate as a bad guy and usually fails. He did not want to be the Kingslayer, but that’s what he’ll always be remembered as. Well, that or the guy that’s humping his sister and breeding hell spawn. Perhaps this scene with Cersei reminds us of the hold that she has over him and that she will continue to manipulate him. Especially now that she wants him to kill Tyrion for her, rather than him stand trial. 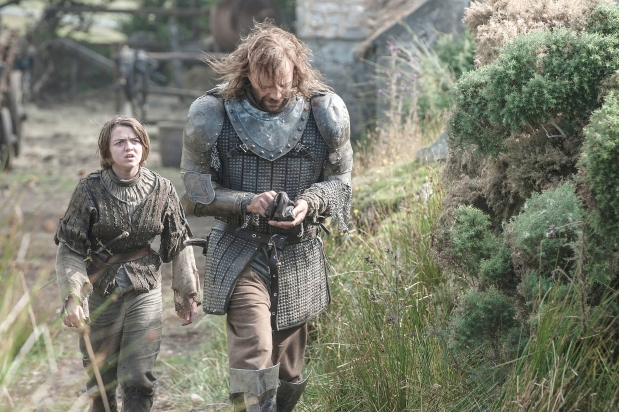 As we follow the Hound and Arya’s journey, we’re also reminded that he’s not exactly a good guy. His captor turned companion relationship with Arya has created a much more likeable character in him, yet his mistreatment of a kindly farmer and his daughter this week has reminded us of his true nature. We also see Wilding, Ygritte, back on form after her break with Jon Snow and failure at killing him, enjoying shooting arrows though people’s faces. Lovely. I’m continually disinterested with Stannis Baratheon and clan, although I do enjoy Ser Davos. The crows aren’t up to much at Castle Black, besides arguing about what to do about the approaching Wildling army, along with the Skagosi, who are busy nomming people.

The closing scene with Daenerys and her army sees her attempting to free another slave city, but I think the entire audience really were just wanting a few minutes more to see that rebellion kick off. However, the entire scene with Dany, Lord Friend Zone and co is one of the highlights of the episode. Her men fight for her affections by offering themselves as a champion against Meereen’s, which ends, quite literally, in a pissing contest. Hopefully next week we pick up right where we left off, with the slaves of Meereen breaking their chains and fighting back.

I'm an aspiring film journalist living in Chester. Into all kinds of geekery from N64 to Xbox, graphic novels, cosplay anime and more. I have an unhealthy obsession with Pokémon and the Legend of Zelda series. So much so that I have two Zelda tattoos and various Pokémon lurking all over my house. In my spare time when I'm not busy being a real person and working, I'm writing or making retro games jewellery. I'm also obsessed with pandas. They're fabulous.
You might also like
CerseiCersei LannisterDaenerys Targaryen