Sometimes you feel as though Game of Thrones’ episode titles are lost on people. They are not highlighted or shown on screen for even a few seconds and yet they always highlight and foreshadow what the episode will be about. 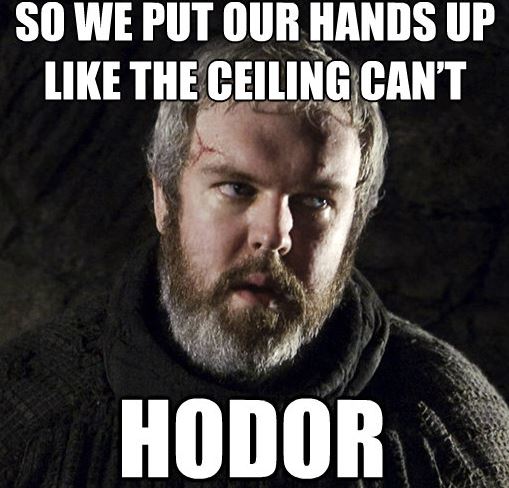 There was a fantastic lack of subtlety in this week’s title, The Bear and the Maiden Fair, as the episode literally ended with the two fighting. But that was the final scene. The episode as a whole followed this allegory, with the vulnerable and the naive falling victim to the brutish and animalistic.

Between Ygritte and Jon Snow it’s definitely Jon who is the maiden, as Ygritte’s awesome ruggedness and no-nonsense Northern attitude mock him and his southern ways. Jon is then schooled by the shapechanger on the ways of those beyond the wall, before he goes on to propose sexual congress to Ygritte himself… which could’ve caused one of the weirdest menage a trois’ in history. Ygritte is a rational person and turns him down though, not being the maiden the shapechanger wants her to be. But as with any good relationship Jon and Ygritte swap the roles, being vulnerable and brutal in opposite turns, as Ygritte later shows her naivety at the grandiosity of a run down windmill and then with the Wildlings’ chances of reclaiming large parts of the North. In 1000 years, 6 attempts have failed, and Jon Snow knows the seventh will…

But he hasn’t seen the state of Westeros, which is still at war, as we see with Robb’s own Small Council. The point of how grumpy Walder Frey is and how little Edmure Tully is looking forward to his wedding are hammered home before Robb and Jeyne take turns to show us their arses. Robb tries to plan a war, gruff and grim, but cannot concentrate with Jeyne being naked. What concentration he has is destroyed when he finds she’s pregnant, showing that a maiden can tame a bear easily.

Of course, power is not always brute strength and Margaerey shows that in a conversation with Sansa about her upcoming weeding to Tyrion Lannister. Sansa shows her naivety about sex during the discussion and the Tyrell girl showing her own experience. Her husband-to-be then shows that power does not rule you out of being a maiden, a child, yourself as Tywin Lannister basically owns him without the stupid boy every realising it.

A metaphorical bear in Jorah Mormont tries to teach Daenerys about the nature of war, still thinking of her as his young charge, but she shows him and the people of the Eastern Lands her own strength. She the most epitomises both the roles of this episode throughout the series, making a great show of strength to threaten an ambassador from a city she covets… but not realising her strength will galvanise and give warning to those same people.

Tyrion is startlingly artless as he considers his wedding, not admitting aloud his own lust for Sansa and his designs on her but expecting Shae to comfortably accept being a Salt Wife, living a comfortable life safely away from his marriage. Naturally she dismisses this, knowing she would not be his love but his whore whilst he was married to Sansa.

Melisandre then tells Gendry he’s Robert Baratheon’s son. I think I see where this is going now… and don’t have much more to say about that.

Arya then shows toughness, claiming to the Brotherhood Without Banners that her only god is Death itself, as she is still furious with them for selling Gendry. Berric Dondarrion somehow expects her to just accept this betrayal and they let their guard down when preparing to raid the Lannisters; this allows Arya to get free and then be captured by the Hound, who almost epitomises the word ‘grizzly’.

Theon is then tempted with women, two hired ladies who tend his wounds and discuss his legandary ‘equipment’. To his credit, Theon realises this is a trick but only until the blood rushes and then he lets down his guard… at which point, a trumpet plays and the charade comes to an end. His captor appears with a very uniquely-shaped knife and proceeds, with help, to ensure Theon’s legend dies there and then.

The main meat of the story, though, is between Brienne and Jaime. Jaime is to be taken back to King’s Landing and Roose Bolton’s reputation increased with Tywin (even though he is supposed to be Robb’s bannerman, may I add) but Brienne is to be left to the fate Jaime already saved her from. Brienne pardons him from saving her if he fulfills his promise and releases the Stark children, calling him Ser as she now respects the Kingslayer, and Jaime goes only under the belief that she will be ransomed and freed. But Bolton’s men have been convinced she is worth her weight in gems, remember, and do not accept the very generous offer Brienne’s father makes for her. When Jaime realises this, he uses his name once more but to do good, to save her; racing back with Bolton’s men lusting for gold, he finds Brienne in a bear pit, fighting a bear, bloodied and with only a wooden sword.

This, then, is when we see Jaime flourish. He jumps into the pit to save her, relying on his name to rescue them both but not knowing for sure. He ensures Brienne gets out of the pit first and then desperately – and adequately for a man with one arm – struggles out himself. The Rains of Castemere play as he pimps away, the bear having saved the ‘maiden’.

This episode was up and down but it ended strongly. I look forward to seeing the interplay between Arya and the Hound now… and, of course, all of Westeros looks forward to the coming weddings…

Sean is an editor, writer, and podcast host at Geek Pride, as well as a novelist. His self-published works can be found at all good eBook stores.
You might also like
breakingEpisode 2Game of thrones