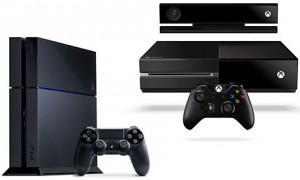 During yesterday’s 2013 Gamescom press conference, Sony confirmed that customers who buy any of this year’s forthcoming Activision, EA, Ubisoft, Warner Bros or first-party PS3 releases will be eligible for a special upgrade program which will enable an upgrade to the PS4 program for a nominal fee. Microsoft quickly followed suit this morning and confirmed that the same scheme will apply to the Xbox 360 and Xbox One- but unfortunately, all of this may come with a catch.

Understandably, the first game to be officially announced for this program is Call of Duty: Ghosts but eligibility may be retailer-specific. Activision CEO Eric Hirshberg  has today stated that “retail programmes by Amazon and Gamestop [will] allow our players to upgrade” within the US. UK partners have not been confirmed, but since the UK has proportionally more major online video game retailers than most other countries -as well as huge video games sales generated by mail order catalogues and supermarkets- this could all get quite confusing.

Additionally, the small charge required to upgrade has been confirmed as $10 in North America, €10 in the EU or £10 in the UK, meaning that UK gamers will be forced to pay approximately 40% more for than American players judging by the current exchange rate.  It is not yet known whether this pricing is Call of Duty specific or whether the costs will vary by publisher, but we’ll keep you updated once further details become available.

A proud member of the Geek Pride video games editing team, Sai can currently be found trying to get through his Christmas games backlog (and failing miserably at it).
You might also like
360Call of dutyCOD