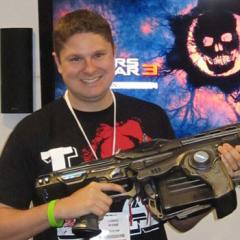 Senior producer Chris Wynn at Epic Games announced yesterday that he would be jumping ship for Bioware. In a post on Twitter Wynn stated that he would be taking up the senior development directors role on the next Mass Effect game. Wynn has only been at Epic for less than a year, though he did work for Microsoft before that, where he was the lead producer on Gears of War 3.

It has been all change at Epic recently, last August they lost Gears of War producer Rod Fergusson for the Executive Vice President of Development role at Irrational Games (A job he is now leaving after helped get Bioshock Infinite released). This was the start of a mini exodus as president Mike Capps, designer Cliff Bleszinski, marketing head Kendall Boyd and a trio of senior developers from People Can Fly.

What this spells for Epic Games is uncertain, but Bioware are picking up a great talent in their quest to win back supporters after Mass Effect 3.

As an aspiring journalist I have found a home here at geek-pride, where I can write upon many subjects. If anybody has something they believe should be reviewed or newsworthy then feel free to send me a message, I always enjoy talking to people.
You might also like
bioshockBioshock InfiniteBioware