Geeks Assemble!: The Next Teams We’d Like To See On Film

Ensemble casts are notoriously hard to pull off on the big screen – for every X-Men there’s two or three Justice League of America‘s, for every Ocean’s Eleven, an Ocean’s Thirteen.  It’s understandable really, how do you tell a story in such a short period of time while giving each character the face-time and respect they deserve and avoiding over-facing the audience with a million-and-one people to remember (I’m looking at you, X-Men: The Last Stand)?

Well, the answer to that (and to most questions people ask me) is “Let’s ask Joss Whedon”.

Earlier this year with Avengers Assemble he showed the world not only how to make an amazing team movie, buy how to make a squillion dollars (don’t check that) doing it. So, to celebrate the release of the  Avengers on DVD and Blue-Ray and the news that DC’s new Justice League film is well in the works, we thought we have a chat about the next couple of teams we’d like to see given the silver screen treatment.

1. Defenders of the Earth 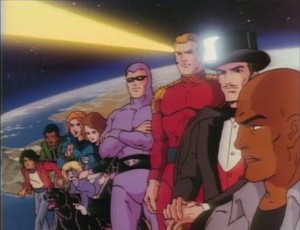 Flash Gordon loved to show off his brain torch

Made up principally of pulp heroes from 1930’s newspaper comic strips, the Defenders protected the Earth from 1986 to 1987 from the forces of the evil Ming the Merciless. While never gaining the prestige of Thundercats or Teenage Mutant Hero Turtles, Defenders still ranks as one of the greatest 80’s cartoons purely for the consistently exciting and imaginative adventures they found themselves embroiled in week-on-week, taking them from darkest Africa to the distant planet Mongo. Even now it remains one of the more watchable of its brethren despite its flaws (Mandrake could do literally anything with his magic but never did, Lothar’s power was pretty much just being a black guy and the children were veritable advertisements for retro-active abortion) and I’m pretty sure Marvel still own the rights.

2. The League of Extraordinary Gentlemen 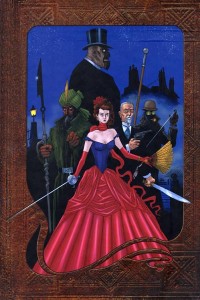 Depending on which of the many Leagues throughout the centuries you’re looking at, members have included such luminaries as Swift’s Lemuel Gulliver, Shakespeare’s Prospero and H.G Wells’ Invisible Man among many others.

What’s that? They already made a film about the League of Extraordinary Gentlemen? Shut up. Shut your fucking face. Much like Highlander 2 and Superman IV: The Quest for Peace, you all must have been undergoing some mass hallucination because they never fucking happened.

The story of the League is truly epic, spanning hundreds of years and worlds beyond our own, filled with familiar-yet-somehow-different characters interacting (in my mind creators Alan Moore and Kevin O’Neill’s greatest triumph) in a truly believable universe. Ever wanted to see Alan Quartermain take on Doctor Jekyll’s malevolent alter-ego? How about Jeeves and Wooster taking on a Lovecraftian nightmare from the beyond space and time? It’s all here in three glorious editions and would make one phenomenal cinematic trilogy. 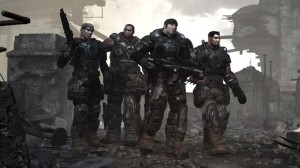 Boybands are a little more badass in the future

I know what you’re thinking. Do we really need another dumb action film about a bunch of steroid abusers with no necks and ludicrous shoulders? I had a similar reaction the first time someone recommended a game where the plot seemed to be “men with big guns kill a lot of bugs” (which to be fair would be enough for most of the writers here at Geek Towers). But then I actually played it and found myself caring for these desperate , broken men and women trying to push back an overwhelming enemy and reclaim their home. And it was their home. What to me at first seemed like just another nicely rendered piece of cover during a fire-fight was to them a part of their father’s house, a hospital, a garden. Soon I felt as though it were my home too, my planet I was taking back from these Locusts who had destroyed almost everything I had cared about. Behind the six-foot-thick body armour and guns with chainsaws on the end, these people have stories to tell – just watch Dominic’s reunion with his wife in GOW2 for one of the most touching scenes you’ll see in a “mindless” shoot-em-up. 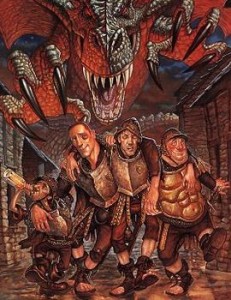 Someone’s gonna hurt in the morning…

One of the best things to come out of Sir Terry Pratchett’s Discworld universe (a universe with already more than its fair share of awesome), the Ankh Morpork City Watch are, most of the time, the only thing standing between the bloated city-state of Ankh-Morpork and utter chaos. Although which side of that line they are standing on at any one time is certainly up for debate. Over eight books and counting, Sir Terry has crafted a group that at once are relatable, dynamic and brimming with social satire. Who else could handle such timely topics as organisational prejudice and the futility of a war based purely on acquisition of finite resources with simultaneous  gravitas, humour and aplomb.

Some of the cast have already made cameo roles in Sky 1’s forays into live-action re-tellings of Pratchett’s other Discworld tales, but we think it’s time for a big-screen fantasy-actioner with Vimes’ boys front and centre. 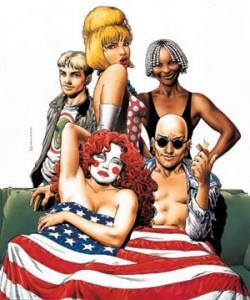 The morning after one of Geary’s stranger parties

Do not adjust your psyche, you are under the control of malicious otherworldly forces who have enslaved most of your race through media manipulation, brainwashing and demonic possession. Never fear though, The Invisibles are here. You might not survive the rescue.

For six years in the 90’s, legendary comic book subversion master Grant Morrison wrote about the struggles of King Mob’s crack squad of magicians, martial artists and transsexuals against the enemies of The Invisible College and humanity itself, the Archons of the Outer Church who, like all good comic book villains, were out to cause the end of the world. Encompassing time-travel, John Lennon’s ascension to godhood and frequenting a modern-day S&M party with the Marquis De Sade, The Invisibles is a weird and wild study of the nature of time, order, chaos, occultism and the magical power of mind-altering drugs among other strange and exotic topics. BBC Scotland have tried to get it made for television in the past, but Morrison’s epic scope and some of the more risqué themes the books deal with may not have been palatable for audiences at the time, but get someone like Lars Von Trier on board and this could be one world-shaking film. Say you want a revolution?

Trapped in the past, Ben Fee finds himself leaping from life to life, putting things right that once went wrong, and hoping each time that his next leap will be the leap home..........
You might also like
Avengers Assembleben feeblog

Panic Over! Robert Downey, Junior will return as Iron Man