previous
Board games suck! And here's why...
random
next
TMNT, Street Fighter and Attack on Titan getting the board game treatment!

This week, John Hanke of Google‘s Niantic Lab has apologised after it emerged that their augmented reality MMORPG, Ingress, had included material located on the real-world sites of former concentration camps, including 70 “portals” on Sachenausen concentration camp alone, provoking outrage from historical societies, religious groups and humanity in general.

After initially arguing that the game relied on user content and sites of significant interest, Hanke relented saying that these particular portals “did not meet the spirit of our guidelines” and they have since been removed with more due to be reviewed.

Ingress is a augmented reality, or AR,  game that involves the player travelling and acting in the real world while also using their mobile device for information. I don’t think there are many people that would consider it appropriate to tour a concentration camp while playing tag or football, but this game has somehow apparently slipped below the ‘common sense’ radar for some people.

The controversy, along with the question of how far should gaming intrude into the real world, is very interesting. Part of the appeal of Ingress is that it incorporates the user into an overlaid fantasy world, using maps and geo-location to guide you to portals, usually located at sites of historical or cultural significance. Very simply, it’s like a treasure hunt with much more backstory. There are players who take this aspect of the game very seriously and use it to broaden their horizons, educate themselves and get some exercise. 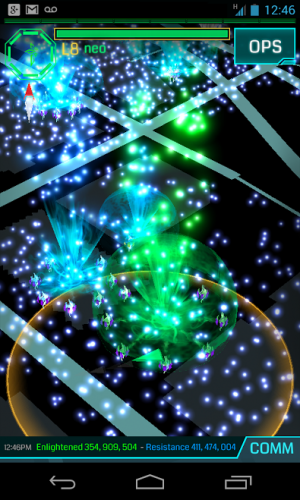 There are portals all over the world, all submitted by users of the game, so it really was only a matter of time before someone submitted something inappropriate. Portals are vetted by the team, though obviously not in person. This also opens up the potential for dangerous portals or malicious placement of them.

The hope is that users of Ingress and the vetting team will police things a bit better and ensure that portals are placed more sensitively in future, although already there are portals on memorials, cemeteries and battle sites all over the world. This has been debated in the Ingress community since not long after the launch of the game and there are players who choose not to use portals in such places, finding it offensive that people could be encouraged to visit these sites just to play the game. But there are also others who see the game as a useful tool for education and even those who argue that this is the best way to map our cultural and historical heritage. Can any landowner request that an online game removes links to the property? This is a pretty new field of disagreement, and is likely only to get bigger and more complicated.

For now I’m sure Ingress players can mostly agree that not everything needs to be a portal, and all of us can agree that there are some places that you just don’t play in.

I'm Mel, currently living in Sheffield, but originally from the other side of the Pennines. I'm a lifelong gamer, RPing from a worryingly early age, and basically raised as a geek - I don't think I ever had another option! Any spare money I have gets spent on comics, photo gear or lucha masks, and any spare time I have, when not gaming with friends, is wasted on Sims, Minecraft and trashy movies.
You might also like
Ap GamesgoogleMMORPG