previous
A New Way to Save the Planet!!
random
next
Dragon's Claws, Simon Furman, and My Introduction to American-style Comics.

“Grayson: Earth One season one is a non profit six episode season dedicated to exploring the origin story of the DC character known as Nightwing — but with a twist. The twist being that Richard Grayson has never had the good fortune of being adopted as a child by Bruce Wayne, thus never becoming the boy wonder. Instead, we have a Richard Grayson that had to fend for himself on the unforgiving streets of Gotham and, even worse, the streets of Bludhaven. A character that has to overcome years of dog eat dog mentality to become a selfless and kind individual. To ultimately fulfill his destiny and become a HERO.”

That’s the setup for Grayson: Earth One, a fan made production by P3 Productions. The series premiered 6 months ago so I’m a little late to the party but, having seen it, I thought it deserved to have some more love thrown at it. At the time of writing, the premiere episode is the only one to have been released and has racked up just over 200,000 views. It seems likely that we may get an episode 2 and, with some luck, maybe an episode 3. Unfortunately, only $10,000 of the $40,000 goal on the production’s crowd-sourcing, indiegogo page was raised so it can be assumed that the full, six episode season won’t be completed. The real question is whether or not, with the full funding failed, any more episodes will be released. It seems to be the intention but it seems uncertain how the team will pull it off with the obvious limitation that they will have to cut the series short. 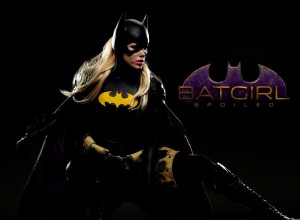 That said, there is no reason to not still be excited about the limited run. Many fan made series encounter the same problems and, even with the funding, take a long time to make. For example, the series Batgirl: Spoiled, had an 8 month gap between Episodes 1 and 2 and is currently getting funding for Episode 3. Unlike official, big budget productions, these indie efforts are made with small amounts of financing that, most commonly, must be crowd sourced from fans who share a similar love and vision of the characters that these productions seek to bring to life. What’s really important though is that these projects can often grasp these beloved characters in a way  that mainstream productions sometimes can’t with their concerns towards profit etc.

Batgirl: Spoiled is a good example of this. While it has it’s flaws, the sound in the fight scenes lacks the necessary (apologies for the awful pun) “punch” for example, the series manages to deliver a unique take on a character that is often ignored: Stephanie Brown aka Spoiler, aka the fourth Robin, aka the third Batgirl. Far from the most iconic Batgirl or Robin, Stephanie Brown has nevertheless taken part in some important storylines, such as War Games, and is interesting in the fact that she isn’t the perfect hero. While many of the heroes in the comics are flawed, they are usually, particularly in the case of the Bat family, possessed of skills beyond those of most villains they would go up against. What marks Stephanie’s career however is the fact that she doesn’t possess this near invincible quality, a fact that is highlighted in the very first episode of  Spoiled when she gets taken out by a gang of regular street thugs.

The acting helps of course. Batgirl is played by Marisha Ray, the host of the Youtube series Superpower Beatdown alongside many other projects, and she really brings the spirit of a character that, to be perfectly honest, I kind of tend to disregard. As Spoiler, as Robin, as Batgirl, Stephanie Brown has always kind of been a bit of a disappointment. It’s why she was fired as Robin, it’s what led to the events of War Games and it’s a primary motivator behind the character in the Spoiled series. And while the series hasn’t exactly changed my opinion of her, with it’s quality acting and writing, it has given me somewhat more of an insight into a character I wouldn’t usually bother to look at. It helps that the show looks so good, with Batgirl and Harley Quinn’s costumes in particular standing out as true to the source material.

Grayson is a whole other kettle of fish though. This is quite possibly the best fan production I’ve seen, due credit must go to works such as City Of Scars though, as it takes a classic character and makes him achingly cool, due in no small part to the excellent acting of Stephen McCain. Nightwing was already awesome but Grayson takes it to a whole new level, as we see a Dick Grayson that fronts a rock band and fights crime all without the tutelage of Batman. The Dark Knight does of course pop up in the menacing form of Kevin Porter, 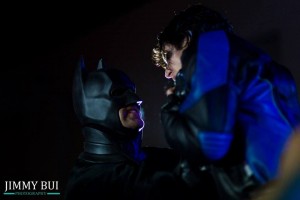 The Bat And The Bird

his brief cameo showing off a very different look for the Bat and displaying a somewhat unexpected relationship between Batman and Richard. Though it is already established that, in this storyline, Bruce Wayne never adopted Richard Grayson, it is made very clear that he is not alone in the echelons of the night.

Grayson: Earth One excels in these twisted portrayals of iconic character. Aside from Dick himself and Batman, we also see a Victor Fries that is playing the role of a psychotic surgeon, searching for girls that are “a match”. It’s currently unclear what for but he’s already killed 30 or 40 girls looking for this match. One girl he kidnaps is the sassy Barbara Gordon, a girl with a pre-established relationship to Dick that pre-empts the main action of the episode. This action is against gang members that, despite their allegiance to Fries, wear half-skull masks that instantly made me think of Black Mask.

There’s also a Helena Bertinelli, aka Huntress, that appears to be a friend, if not girlfriend, of Dick and Carrie Kelley, the Robin of The Dark Knight Returns, that is seeking to learn to play guitar from Dick. There’s a lot here to suggest a fully occupied DC universe with characters we’ve just met already having big arcs stretching before them. Promo pics already show Rileah Vanderbilt’s Helena equipped with a crossbow, suggesting that she will indeed become the Huntress that we all know and love. And with Carrie Kelley becoming more involved, especially as she says things like “if I want to be the best, I have to learn from the best”, there are possible Robin tones entering the series. Carrie may have been referring to guitar but after you see Dick basically dodge a bullet then disarm a Mutant, the freakish gang of The Dark Knight Returns, without batting an eye, it’s hard to believe that inspiration may spread beyond music.

The main man though is Stephen McCain. A former Olympic gymnast, an obvious help in the role of Nightwing,  the man delivers. Everything you could have wanted from Dick Grayson, from Nightwing, is bundled up into this package of cool. This is the role brought to life. The physicality, the skill, the emotion, everything is perfect. And here’s the thing. Fan made productions like Grayson, like Spoiled and like City Of Scars, to name but a few, employ some serious talent that we may never see in mainstream films. It’s a crying shame that talent like this, particularly with rumours of Nightwing in the upcoming Batman Vs. Superman, will never get that full on recognition that it deserves. There’s no guarantee that McCain would fit a large scale production like the upcoming Man Of Steel sequel but, equally, on the evidence of work like the superb Grayson: Earth One, it’s hard for me to imagine anyone else playing the first Robin to outgrow Batman with quite so much effortless cool.

I'm a fan of Batman, RPGs and anything fantasy related. Mostly PC based.
You might also like
Barbara GordonBatmanbreaking