What if I told you that there was a series of books who have sold millions of copies that you’ve likely never heard of? 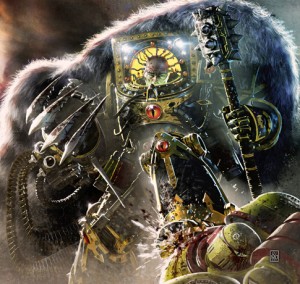 What if I said this series spanned more than twenty books in the space of seven years, covering hundreds and hundreds of characters, all intertwined in a single, relatively-cohesive storyline?

What if I told you that this series has regularly broken into the New York Times Bestseller List since 2010?

What if I said that at least eight different writers had contributed, providing a strange and wonderful tapestry of a tale?

Presumably, you’d say ‘sign me up’ or ‘why have I never heard about this series?’ At least I hope you would, as this article is about my love for one of my favourite series of books: the Horus Heresy series.

I expect that, for some people, this will immediately start some alarm bells ringing, and that’s because this series is attached to a very popular and criticised Intellectual Property: Games Workshop’s Warhammer 40k tabletop game. I expect this reaction as books and so on tied to an IP are looked down upon, are assumed to either be lazy ports or to receive their success only from people who already massively bought-in to the franchise it’s tied to.

Games Workshop, however, are a little different than Wizards of the Coast or Bungie in that they set up their own Publishing company to handle the books tied to their very popular games: the Black Library. Mainly focussing on either Warhammer 40k or Warhammer Fantasy, GW saw that people who enjoyed their games mainly did so because of the rich worlds they were set in and, thus, saw another product they could promote to their clientele: books based on their games. For years, they produced series and individual titles, aiming at the ‘armies’ most commonly purchased, and making a decent amount of money.

Then, in 2005, they hit upon the idea of bridging not only a large gap in the narrative of their Warhammer 40k Universe, but to embark on an ambitious set of books which would cover an entire galaxy that fought itself, the hubris of a tremendous human society that spiralled into a civil war from which they have not recovered 10,000 years later. It was an enormous and brutal task but those running the Black Library knew that not only people who the game would be interested but lapsed fans and even people who’ve only played, say, the very successful Dawn of War series of video games.

Across six months, three books in an opening trilogy arrived, showing the downfall of Horus and the Empire of Man when the Emperor – being of tremendous psychic ability and intellectual brilliance who united the population of Earth and created the Space Marines, genetically-bred super soldiers – retreats from a conquest of expansion and reclamation for reasons he cannot share. Horus is named the Warmaster in the Emperor’s stead, and, without the Emperor’s guiding hand, falls to the influencing power of a realm he did not know exists. This makes him turn on his ‘father’ and Earth, leading a war across thousands and thousands of world.

From there, another eighteen books have been released in the last six and a half years. They naturally vary in consistency with so many different writers but, overall, the trend has been rising. Risks have been taken throughout, with Prospero Burns a particularly fascinating meditation on the role of a storyteller and bard when dealing with savage beings of astonishing power like the Space Marines. Some of the books are collections of short stories, expanding upon the galaxy the war takes place in without dwelling on it.

The books have broken into the New York Times Bestseller List since 2010. Fear to Tread by James Swallow, released September last year, was in the chart for weeks. They have been fascinating and generally well-executed… but are still looked over and ignored.

Part of this, to be fair, is the Black Library’s weird reluctance to release the books as eBooks anywhere but their own website. The eBook prices they charge are as high as the physical books, reducing much of the point of buying an electronic book and effectively reducing their market for ereaders, which make up a large proportion of the book market now. But I feel a lot of the reason many of you won’t have heard of the Horus Heresy series is simple snobbery at the connection to Games Workshop and a successful Intellectual Property.

Whilst Games Workshop did have a well-known and established franchise to connect the Horus Heresy series to, it also didn’t have to take the risk it did with one of the most seismic events in their Warhammer 40k universe: they could easily have continued to sell books based on current events, such as the popular Ciaphas Cain novels. And the books could have fallen flat on their face, making their concept look somewhat silly. But they have flourished, made mistakes, taken risks and done very well.

I know this is a little bit of a love letter to the series, that I’m geeking out about them, but what more do you expect on Geek (dash) Pride dot Co dot UK? #PodcastJoke I have really enjoyed the series so far and keep going back for 3-4 book splurges every year: I’m only up to book 15 because I can’t afford to just splash out on a dozen books. If you like Space Opera, odd Science Fantasy (because that’s what the series really is) or action novels then I’d recommend this series to you. If not, I’d still urge you to not only give the books a try but to not dismiss them because of their franchise tie in.

Books for the Book God, Series for Khorne!

Sean is an editor, writer, and podcast host at Geek Pride, as well as a novelist. His self-published works can be found at all good eBook stores.
You might also like
booksspotlightWarhammer 40k