previous
Games Developer Atlus To Be Sold Off
random
next
Red Sonja:Legends brings together team of female writers.

IDW set for all new Rogue Trooper series and re-release of classic story. 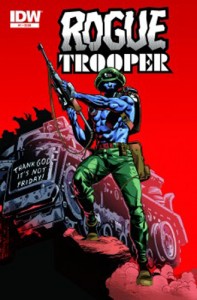 Following their successful launch of Judge Dredd IDW are set to bring another 2000AD/Rebellion classic character to their roster, Rogue Trooper.

The classic series was co-created by Gerry Finley-Day and artist Dave Gibbons, set in the far future where war has poisoned Nu- Earth’s atmosphere. In order to defeat their enemies the Norts the Southers create blue skinned genetically engineered soldiers named G.I’s to fight in the corrosive atmosphere. Someone betrays the G. I’s leading to them all being slaughtered by the Norts but for one survivor who now stalks the battle scarred landscape of Nu-Earth with vengeance on his mind.

Alongside a new Rogue Trooper series set to start in 2014, IDW will be re-releasing the classic Rogue Trooper story in new full colour collections with colours provided by colourist Adrian Salmon.

Andy Haigh started writing to counteract the brain atrophying effects of Retail Hell, now it's an addiction. Andy is an unrepentant sequential art absorbist and comics are one of his passions. Other interests include Film, Music, Science Fiction and Horror novels and quality TV like Game of Thrones. He can talk about these at great length if only someone would listen. He lives a somewhat hermit like life in The Shire, spends too much time on social media and is still waiting to go on an adventure.
You might also like
2000ADbreakingcomics