In Defence of the Fast Zombie Now, I really like everything Simon Pegg’s done, except maybe the Fantastic Fear of Everything, which I’ve not seen. I love Spaced, Hot Fuzz, Shaun of the Dead, the new Star Trek movies, I even quite liked Paul, despite the absence of Edgar Wright.

Edgar Wright, as his name implies, is on the left.

Anyway, a while ago, Pegg posted this:

I know it is absurd to debate the rules of a reality that does not exist, but this genuinely irks me. You cannot kill a vampire with an MDF stake; werewolves can’t fly; zombies do not run. It’s a misconception, a bastardisation that diminishes a classic movie monster. The best phantasmagoria uses reality to render the inconceivable conceivable. The speedy zombie seems implausible to me, even within the fantastic realm it inhabits. A biological agent, I’ll buy. Some sort of super-virus? Sure, why not. But death? Death is a disability, not a superpower. It’s hard to run with a cold, let alone the most debilitating malady of them all.

It’s an argument I have sympathy with. I hate what is routinely done to zombies by people that either do not understand drama or people who are insufficiently reverent of the established masterpieces of a genre. I argued it myself in a recent article, and my bitterness at the success of the Twilight franchise can be seen from space.

Ignoring the more useless assertions of zombies not being “really zombies” if they move quickly, there are examples of running, tool-using zombies in Romero’s Night of the Living Dead, Dawn of the Dead and the alt-sequel Return of the Living Dead*. 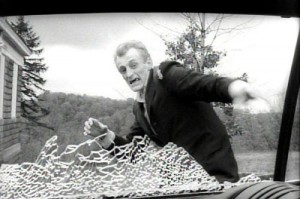 Tool-using zombie from Night of the Living Dead ’68

To ignore these examples or write them off  as “aberrations” is to cherry-pick.

Consider the logic of the walking-not-running dead argument. Something is dead. It can walk despite being dead. If it can walk, why would it not be able to run? It doesn’t feel pain, of course it would run. It would run until it fell apart in a twitching heap of rotten flesh.

More significantly, the fast zombie is bereft of poetic subtlety. As monsters from the id, zombies win out over vampires and werewolves when it comes to the title of Most Potent Metaphorical Monster. Where their pointy-toothed cousins are all about sex and bestial savagery, the zombie trumps all by personifying our deepest fear: death. Zombies are our destiny writ large. Slow and steady in their approach, weak, clumsy, often absurd, the zombie relentlessly closes in, unstoppable, intractable

Zombies are man’s twisted alter ego, a reflection of ourselves as meat-consuming living death that hunts and kills and stampedes. They’re vile, stupid crowds that exemplify our baser urges. As Barbara said in the early-90s remake:

Fast zombies are terrifying. They combine modern fears of contagion, social unrest and ravenous, and blood-sick consumption that destroys everything without thought or consideration. I’d say they’re a more visually potent threat, less clown-ish and parodied to (un)death. Pegg goes on to say this is less subtle, but I’d say it’s an equally valid form of horror, it’s just upgraded the dramatic tension; if one gets in, there’s a good chance you’re all horribly dead.

With the increased danger, the situation is more desperate. More desperation means more hard decisions to survive. Slow zombies typically require more in the way of plot contrivance to produce these elements, or defaulting to humans as the real dangerous enemy (as in Romero’s Dawn). It turns out that just about anyone being able to meander around a monster means that monster lacks threat.

Meanwhile, Danny Boyle and Alex Garland were developing their own end-of-the-world fable, 28 Days Later, an excellent film misconstrued by the media as a zombie flick. Boyle and Garland never set out to make a zombie film per se. They drew instead on John Wyndham’s Day of the Triffids, as well as Matheson and Romero’s work, to fashion a new strain of survival horror, featuring a London beset by rabid propagators of a virus known as “rage”.

Pegg is right, but he downplayed the zombie connection. Writer Alex Garland explains in the film’s production notes:

“I see it as a sort of oblique war film, relayed via seventies zombie movies and British science fiction literature.”

Since 28 Days Later, and despite the protestations of well-meaning purists like Simon Pegg; the genre has adopted the updated fast zombie as the new industry standard. This itself was of course, just an updated version of the previous idea in African/Caribbean folklore of a reanimated corpse-slave of a necromantic sorcerer. The origins were shifted/updated with the times and this continued evolution is no different. The fast zombie combines the raised dramatic stakes and the disgust of a degraded humanity.

After all, who watched Snyder’s Dawn of the Dead remake and not think about what they would do in such a situation? Such an intense reaction to the  hook of the fast zombie is testament to how successful a mutation on the zombie meme it is; some ghouls you just can’t get back into the steel barrel without them gnawing your fingers off.

The final argument is pretty simple. Tomorrow you wake up and the sky is filled with black, greasy clouds of smoke, screams and gunshots. Swarms of those who have recently died have returned to life and committed acts of murder on the living. Do you want them to be a) shambling idiots, or b) psychotically hungry maniacs that could quite happily compete in sprinting challenges at the Olympics? Those that want to stay alive would pick a) – because they’re less scary.

So if you want your horror monster to be less scary, by all means, look at Romero’s zombies with rose-tinted glasses. Me? I’ll be hiding, nodding behind the people with plans, knowing full well that the people who come up with plans get eaten first.

*The Return zombies put pretty much all other zombies to shame, by the way, there’s no term for just how doomed we’d all be in that apocalypse. They can talk, they can run, shots to the head don’t kill them, burn them and they spread into the atmosphere and cause more zombies with the chemicals they release. Return also gets my preference for “superior sequel to Night” by managing to not vanish up its own bum with Romero-style social commentary. It introduced cunning and even mildly sympathetic zombies that could “feel themselves rot”. They were terrifying rushing, rotting hordes of the dead, and the film is one of the best comedy-horror genre-mashes in film history.

I was born very early in my life and now live on a diet of scorn and sarcasm. Follow me @ryezuul
You might also like
breakingdawn of the deadHot Fuzz