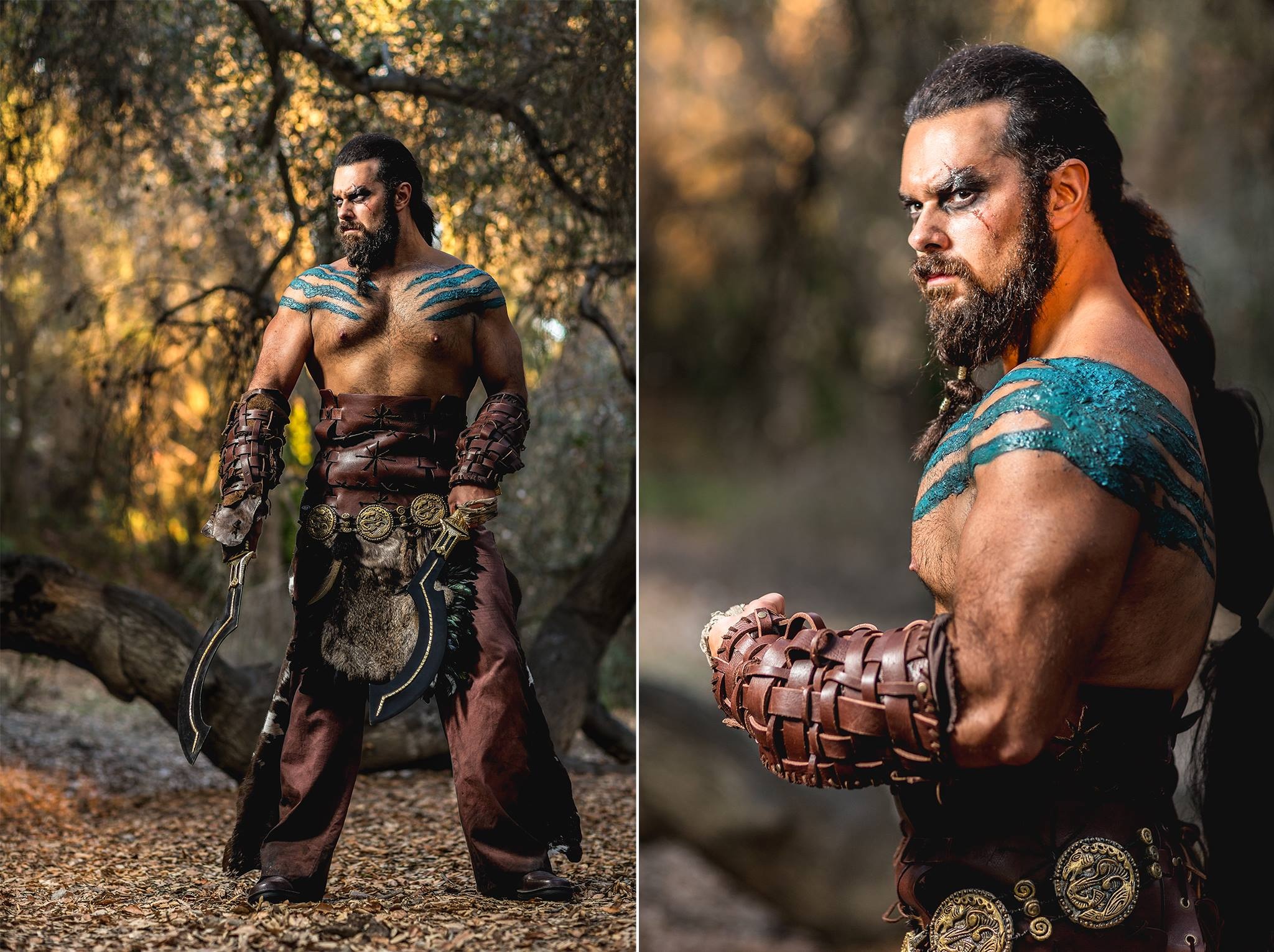 After a long leave of absence from the cosplay interview scene, I felt it time to bring it back; and back with a Dothraki ROAR!! This Interview is with an extremely talented Cosplayer who I fist stumbled across while trawling through Youtube; where in I happened upon a video of his appearance at Blizzard Halloween (See video below).

Most will known for his Khal Drogo Cosplay, Geeks, I present to you; Rene Koiter:

1. Rene Koiter, tell Geek Pride and their readers a bit about yourself. Where are you from, what do you do for fun and what do you want out of life?

I was born in Argentina but grew up in the Netherlands. Since having the capacity to remember, I have always been into geeky stuff…particularly movies and video games of the fantastical and science-fictional kind. In my university years, I got in touch with several folks over at Blizzard Entertainment who are the makers of games such as Warcraft, StarCraft and Diablo. One thing led to another and now I work at their main base in Southern California. Quite a trip! I work as a graphics designer, producing imagery and animations for Blizzard’s web sites. On the side, I really enjoy working out and lifting heavy weights. It’s a great compliment to a sedentary work style…and has its benefits when one day you decide to go on costuming adventures as bold characters.

2. Be straight with us.. The beard, its the source of all your power right?

How dare you compare me to a weakling like Samson. Who would store the source of all their power in their hair?!? My power comes from my mind and from my heart, man. Good thing too, because the mane and lower dangly part of the beard for Khal Drogo’s recreation are extensions. Although, I secretly do wish I could grow a glorious Dothraki pony tail. My hair is naturally curly/wavy so it coils up too much to wear down. A beard, I have no problem growing out though. Did I make you jelly? 🙂

3. How long have you been Cosplaying for and what was your first ever costume?

I have only been cosplaying for a few years and have only done two characters. The first one I am well-known for is Jim Raynor, the protagonist of Blizzard’s StarCraft. He’s this gun-toting Han Solo type scoundrel turned marshall who gets embroiled in an interspecies conflict between the highly-advanced Protoss and the bug-like Zerg. I looked in the mirror one day and thought I bore a mighty resemblance. The second portrayal I did was last year’s Khal Drogo. At Blizzard we have this cool Halloween event where people dress up and go up on stage with a chance to win prizes. I thought it would be fun to participate and give my colleagues a good show. Game of Thrones is definitely in line with the fantasy realms we breathe, so Drogo was a no-brainer as I perceived my features to be strikingly similar.

4. Do you make all the costumes yourself and if so what was the one that took the longest?

Khal Drogo was definitely the most ambitious project. What I keep saying is that this character is so epic and larger-than-life that you really need a team to build him properly. So I decided to divide and conquer. I physically prepared for he role such as growing out the hair for the extensions, working out like a beast and then emulating Drogo’s mannerisms and speech. Then I was referred to a talented costume designer, Nora Holley. She had worked in the film industry and had the artisan craftsmanship to tackle those barbaric materials like leather and fur. For hair and makeup, I conscripted Celeste Aviva Elson and a Scottish fellow who goes by the online pseudonym TrippedWire. Both are incredible at what they do and adopted some crazy first-time techniques to enhance my natural features to look like the great Khal. Finally, I had two colleagues of mine help me out in bringing the final act together. One sculpted and molded the iconic golden medallion belt and the other served as the ill-fated translator during the performance. In hindsight, I have never seen such a monstrous collaboration for Blizzard Halloween before. Dream Team Drogo won first place that day.

5. any tips for budding cosplayer out there who want to follow in your epicly beardy footsteps?

As with pretty much everything else in life, you as an individual will never be as influential as a pack of talent working together to a common goal. You are as a strong as your team so if you want to go places it becomes essential to collaborate. You want that epic beard? You better have a damn good hairdresser! So find cosplay projects and team up, you never know what kind of special you may unleash upon this world.

6. Are there any fellow cosplayers out there who you look up to and wish you could emulate?

Lately I have been enjoying the cosplay of Meagan Marie and Angela Bermudez. These are some fiercely talented ladies who really get into the characters they portray. The artistry displayed in their works is phenomenal…and it may be my biased self but I think their focus gravitates more towards video games which is always a plus for me.

7. What convnetions do you enjoy going to most and any memorable moments?

I have been to SDCC twice, but not in costume. Since I am a Blizzard employee, I always get to go to BlizzCon. My most memorable moment was in 2011 where I was dressed up as Raynor and my colleague (the Dothraki translator) walked around as Ghost unit from StarCraft. The con-goers swarmed us and at one point we were posing for photos for about an hour in a single spot. Crazy. The power of cosplay is that you’re no longer an attendee but you become an attraction. And if you gang-up with others the effect multiplies exponentially….remember, you’re just stronger as a team. Another cool thing was that we got to hang out with Adrianne Curry, former America’s Next Top Model and Geek Extraordinaire. She’s also very into cosplay and a big World of Warcraft player. The show closed in style with the Foo Fighters in concert. What a memorable BlizzCon!

8. Khal Drogo is obviously a huge success for you, with your pictures and video being splashed all over the internet, what is in store for peole next?

I want to hit up SDCC this year and conquer that convention as Khal Drogo. It’s a great venue for the costume as it is an immediately recognizable character. Also, I have some photoshoots planned with some Daenarys cosplayers, one of which is quite uncanny I must say. As for future costumes, I have one video game character in mind who is a cult-classic but surprisingly no one has ever cosplayed him to my knowledge. I like characters that fit and resemble my own physical characteristics. People are very attracted to look-a-likes, it’s like seeing twins. So pranking and leaving people wonder in that way is always a personal motivator for picking a character to cosplay.

9. dare I ask, Game of thrones or Lord of the Rings?

Wow, you got me there! They are quite different kits of the fantastical. GoT is more medieval and grounded whereas LotR is high-fantasy with a greater set of cultural/racial diversity. It’s a tough choice but in the end I’d pick LotR. It’s more colorful with an equal amount of safe havens and dark places to journey to. GoT is bleaker, as it seems everything there just goes through perpetual times of sh!t. What I would give to cosplay as Thorin Oakenshield. Dwarves rule! Even though I am 6’4″, with some trick photography I think I could be a great King under the Mountain.

10. you have been exposed to some radioactive material, it has given you one power of your choice, what would it be and what would you use it for?

I love to eat, especially baked goods. So if I had the super power to consume carbohydrates without them affecting my physique and ruining months of work out, that would be great! Plain oatmeal, eggs and chicken just gets very stale after so long 🙂

From N.Ireland but now living in Manchester, England; Matt is the founder and CEO of Geek Pride. Interests: Photography, Music, Art, poetry, Military History, Model making and painting and of course gaming (table top and computer)
You might also like
artistbreakingcosplay