previous
Marvel release Guardians of the Galaxy images ahead of trailer's arrival
random
next
The Story of Space Boy, Hotwheels, and A Pep Talk

Isometrics Present: WARP Month: Enemy Zero, the Invisible, the Inhuman and the Irreplacable 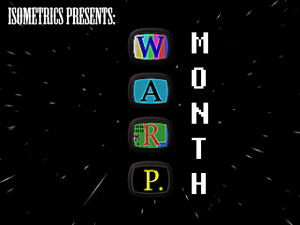 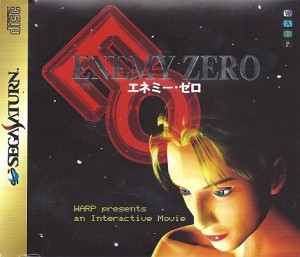 Welcome to Isometrics, the hyperWARPed historical look at the literary world of video games. WARP month continues with Enemy Zero, a very divisive game from the ever divisive Kenji Eno. D was the first big hit, the game that sent his name out there into the virtual aether, with a sweeping tale of virtual actress cannibals being a surprise hit. So how would Eno follow up a game like D? How could he? By taking a lighter to a rather lucrative bridge.

Well, the actual follow ups Oyaji Hunter Mahjong and Short WARP don’t really count, since neither left Japan, and the latter had an incredibly limited run of 10,000. But it was around this point that D was being ported to other platforms by Acclaim. The Sega Saturn and PC versions were released to mild success in the US but the Playstation version came with a few problems (as detailed in the write-up on Eno’s life). To put a long story short, they made about a quarter of the games they could have sold and Eno, rightfully pissed, did a deal with Sega to publish a game for the blind and donate Sega Saturns, as well as publish the anticipated follow up to D, Enemy Zero. The announcement and subsequent reaction of the Sega exclusive at a Sony trade show is legendary, and the fact that even after that he had major shareholders at Sony going to bat for him is kind of a testament to the man’s almost rock star aura.

Very little of this has to do with the game though, which like all WARP games was released to mixed reviews and limited success outside of Japan. This is kind of a pity given that Enemy Zero from a mechanics and gameplay standpoint is possibly the tightest and most interesting of the Laura trilogy, including an array of unique twists on gameplay conventions on top of a story that has the somewhat faint honour of being the most straightforward of Eno’s ouvre. 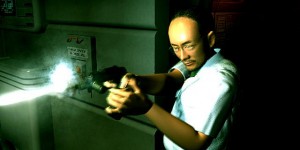 The story concerns our favourite (read: Only) virtual actress Laura. This time in the role of Laura “Not Ripley” Lewis, crew member of the “Notstromo” space ship AKI, woken up from hypersleep after a detonation opens the ominously monographed “E0”, revealing a swarm of invisible aliens who very quickly kill the most obvious soldier, Parker (this sounds familiar…) in a manner about as graphic as a lot of the more violent games of 1997.

Therein lies the game’s most major mechanic; you fight invisible aliens. This goes about as well as can be expected, especially since poor Laura dies if she is brushed by one too.On a side note the game (somewhat tongue-in-cheek)  was praised for its graphics, when there isn’t really much to render on screen at a time.

Now in the age of modern warfare, where checkpoints are given every corner and you have a million forms of radar, this might be considered a terrible mechanic, but oddly it works really well at increasing tension. You get two very tenuous lines of defence during the D-style interactive movie sections which are the first half of the gameplay focus of the game: first you pick up (though can miss, making the game literally unwinnable) a small earpiece which chimes, Nyman-esque, whenever an invisible alien is nearby. It deliberately only comes out of one speaker, simulating the player character only detecting out of one ear as well. It oddly enough works very well, in part because of its familiarity to the score composed by Oscar winner Michael Nyman. The story behind his involvement is fairly legendary but needless to say the soundtrack is fantastic, helping to elevate what would be some fairly mediocre (by today’s standards) voice acting and CG movement into something that really hits at all the emotions. 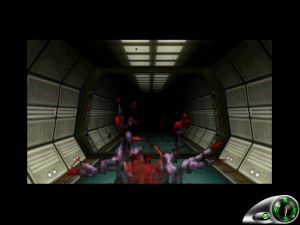 The other item you pick up is a gun for use during the second, FPS-style gameplay focus of the game. It has an incredibly limited amount of shots (that must be recharged at limited points in the game), must be charged up incredibly slowly and only holds charge for less than three seconds before it fires. For reference’s sake, this is like jousting with a cardboard tube.

This effectively is most of your arsenal, which makes combat a spine-chilling ordeal to be avoided unless there is absolutely no alternative, which by the later stages of the game there kind of isn’t. This is compounded by the save and load feature, which is very strictly limited, furthering the oppressive atmosphere the further you get in to the game. That said, the game is fairly short, so the suffocating effect of having limited chances to save your game isn’t quite as major and catastrophic as it appears. The rest of the items you collect used to solve various puzzles or to add to the oddly poignant atmosphere. 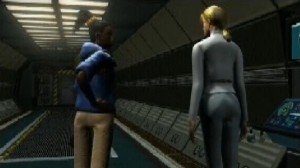 Kimberly and Laura end up working together for most of the first two CDs.

Outside of the continuous themes of using a virtual actress or exploring the interactive movie concept, the major theme of Enemy Zero is the nature and essence of humanity, particularly with the union of love and fear.

Warning: Major Plot Spoilers Ahoy. If you don’t plan on playing Enemy Zero or don’t mind it being spoilered, read ahead Space Cowboy. Otherwise go and buy a Saturn!

Kimberly’s love for husband Parker is her primary drive through the rest of the game, but it is also ultimately the reason for her death, choosing death on her terms next to her love over a chance at escape without him. Conversely, Laura’s relationship with David is near transcendental, a love that goes beyond the human flesh, even beyond corporeality, with the revelation of David as an android and his sudden demise, as well as Laura learning of her artificial roots as well. 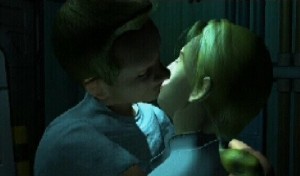 Love involves a lot more clipping issues in the future…

The game explores the complexity of a love between two artificial lives predicated on artificial memories rather well, ending with the rather touching last act, where David’s consciousness, now inhabiting the AI computer core, serves as Laura’s eyes, guiding her away from danger and invisible aliens right when she is at her darkest. It’s a surprisingly effective climax for a game that by the nature of its mechanics cannot have one big final scene, although the power of the scene is somewhat tempered by the sight of a space ship escaping by flying through a tunnel that seemed to be designed by an architect that specialised in theme parks, but it on the whole works and fits in with the metaphor of finding humanity.

Finally, on the subject of interactive movies, if D is a very loose adaptation of Bram Stoker’s Dracula, than this appears to be an attempt to adapt the atmosphere (and indeed several key plot elements and characters) from the 1979 movie Alien. Video games tend to be influenced far more by the film’s sequel, for rather deep, important reasons like the fact it is completely awesome, but Alien is a film with atmosphere and a haunting predatory sensibility that Eno clearly took inspiration from. The method to creating an interactive movie this time was to take the emotive high points of Alien and find ways to recreate the experience of playing those scenes. The invisible aliens taking the place of the perfect haunting xenomorph is one such method, compounded by a scene where Laura is infected that bears incredible resemblance to the face hugging scene in said film. There is an artificial human subplot in both films, though in Enemy Zero, having two androids adds an interesting dimension to questions of humanity in an artificial environment. The data log save system references Ripley’s own monologues and countless others, it isn’t really worth going through all of them.

The point with all this is that Eno took aspects of the movie Alien that had a particular effect on either the narrative or the viewer and found ways to adapt them into his game, with mostly successful results. It was by no means perfect however; the difficulty of the game meant that a lot of people didn’t experience the whole game and often dismissed it as simply unplayable, which wasn’t entirely fair. It was a game that conveyed a certain effect very successfully, but due to the nature of game design at that stage in history, it was left with flaws that affect its place in history.

What do you think of invisible aliens? Was it a graphical masterpiece or trolling? Did you ever play Enemy Zero? Direct your deluge of comments to the section below, or to the Geek Pride Facebook page, or to either Geek Pride’s or my own twitter pages.

An upstart young literary critic, reviewer, novelist, lyricist, metal vocalist and master of hugs, with a particular tone mixing academic critique with bouncy childish glee.
You might also like
aliensbreakingIsometrics