previous
Shipping: Most of it I just don't understand
random
next
Q&A with Sean Patrick Fannon 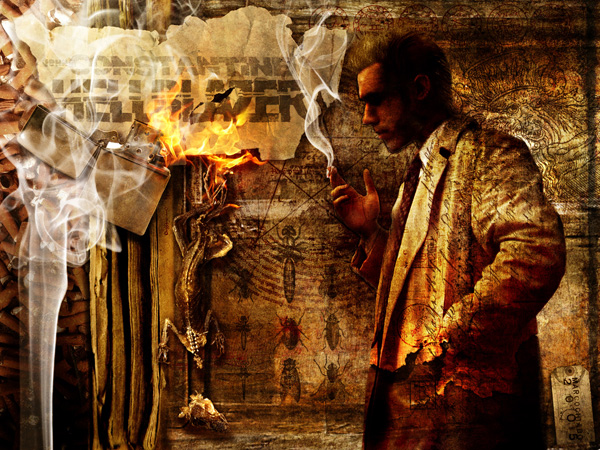 Dressed in a shirt, tie and yellow trench coat, with a grizzled unshaven look, blonde hair and a smouldering Silk Cut in his hand, John Constantine is a blue collar, chain smoking, self-serving, manipulative, “nasty piece of work” in his own words. A master of deceit and misdirection, owner of a scathing wit and also a very powerful magus, who has a habit of saving the world from numerous supernatural threats that hardly anyone else is aware of. Whilst ultimately striving to do good -even if it’s on a subconscious level- Constantine is a danger to everyone around him. His friends have an uncanny habit of ending up dead or worse as a result of shady dealings with dark powers or in retribution resulting from said dealings, with the notable exception of his long time friend and accomplice Chas, a London cab driver who to be clear has had his fair share of life changing experiences as a result of his continued association with Constantine.

John Constantine was the main protagonist of DC Comics long running Hellblazer comic for mature readers, the first comic intended for a more adult audience. A flagship title for DC’s Vertigo imprint, which started in 1988 and was recently announced as ending with issue #300 which provoked strong reactions from both fans and those within the comics industry itself.

For me and no doubt scores of other comics fans, John Constantine was like a real person; such was the skill with which his character was built up over the years. Whilst Superman was flying around saving people from bad guys and throwing cars around, John Constantine was down the pub or stood in a shadowy corner of Camden lighting up a Silk Cut and trying to deal with the latest situation he found himself tangled up in.

These problems were dealt with in a gritty, brutal and realistic manner, and one of the finest accomplishments of Hellblazer was the way the real world and the occult were blended in such a manner that they fitted together like pieces of a jigsaw. A young punk from Liverpool with an attitude and an interest in the edgy occult, Constantine’s first real encounter with the occult was a bungled banishment of a demon summoned by an abused child. The demon wrought bloody vengeance on the girl’s tormentors but then refused to leave. Constantine’s attitude and swagger didn’t make up for his naivety and  his fumbled summoning of Nergal would have grave implications, the fallout left several friends dead, the girl’s soul dragged down to hell right in front of him and Constantine himself committed to Ravenscar Mental Institute after having a mental breakdown, where he was subjected to horrific abuse for being a child murderer, since of course nobody believed his story.

Constantine has been through the wringer over the years with numerous relationships that have fallen apart, friends that have died or worse and even been homeless for a while and dealt with alcoholism.

His time on the streets is particularly grim, courtesy of one of Hellblazer most popular writers: Garth Ennis. Crawling into a bottle after a relationship implodes he finds himself on the street, but even on the street -destitute and broken and sporting a mop of hair and scraggly beard- darkness and the occult seek him out and he realises that a vicious brood of vampires are feeding on the homeless.

Constantine was the ultimate confidence man as seen in Garth Ennis’s initial story ‘Dangerous Habits’ where the chain-smoking Constantine, diagnosed with terminal lung cancer, manipulates The First of the Fallen (a Lord of Hell) into curing his cancer.

John had a family too and they played a part in his story- when his niece Gemma (first appearing in issue#4) who grew up idolising her uncle John, started dabbling with magic and the occult despite her parents’ efforts, it would have a lasting impact on their relationship through the years. John had to save her on several occasions, but Gemma became quite skilled in the arts after these initial fumblings. 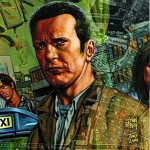 For all Constantine’s talent for sleight of hand and magic, he wouldn’t have got very far without his right hand man Chas (first appearing in issue#1) who would go on to be Constantine’s best, and in a lot of cases only, friend. Their relationship was founded in Constantine’s youth when the young punk was living rough and jumped at the chance to have a roof over his head, even though Chas lived with his mother. Chas confided in John about his mother being a witch and having a malevolent chimpanzee familiar named Slag. Appearing shortly after his brother was found hanged and his mother killed his father, Slag enjoyed tormenting Chas. Constantine took care of Slag and this formed the basis of their enduring friendship; Chas becoming a London taxi driver helped Constantine no end when it came to getting about, and formed the basis of Chas’ own limited series.

There have been numerous other characters in Constantine’s world including: 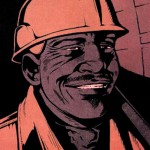 Map (first appearing in issue #135), a supremely powerful magic wielder who can channel the ‘spirit’ of London and has an omiscient awareness of everything happening in London. Equal parts advisor and friend, Map, in true Hellblazer style, despite his power would rather work his dayjob maintaining the London Underground -a job that Constantine helped him get- than spend his time on the surface where he is revered by other magic wielders. 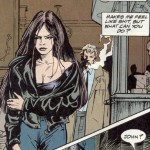 Ellie (first appearing in issue#43) is a disgraced succubus and servant of the powerful demon Triskele, and becomes a powerful ally of John’s despite initially being part of a plan by the First of the Fallen to help snare him. Ellie represents the ambivalence that is often present in Hellblazer’s world- characters are not reduced to being merely good or evil despite Ellie being a servant of Hell. 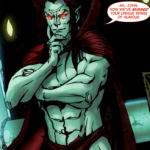 First of the Fallen (first appearance issue #42) one of the Lords of Hell and one of John’s major enemies. Dresses in a suit when on the mortal plane, possesses a contempt of mortals and is capable of making people do his will amongst other various magics . A bitter animosity between the two festered after John managed to manipulate the First of the Fallen with Ellie’s help. 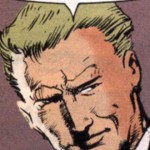 The Snob aka Gabriel (first appearing in issue #43) one of the Heavenly Host, who John first meets whilst searching for a way to cure his terminal lung cancer. The Snob is smug, aloof, looks down on humanity and doesn’t pay much attention to mortals, finding them and their brief messy lives unengaging until John comes along. Along with Ellie and the First of the Fallen, the Snob is integral to one of the most popular and acclaimed story arcs in Hellblazer’s long history from writer Garth Ennis . 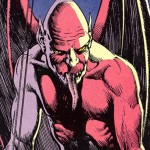 Nergal (first appearing in issue#11),The demon summoned by John at his first real encounter with the occult. Nergal would be a continuing presence in John’s life second only to The First of the Fallen.  John’s relationship with Nergal become further complicated after a transfusion of demon blood saved his life after he was hospitalised. This transfusion would also play its part in John’s life, retarding the aging process somewhat and saving his life from the King of the Vampires whilst homeless. 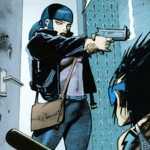 Epiphany Greaves (first appearing in issue#256), An alchemist and daughter of London crime boss Terry Greaves, the rebelious and sarcastic Epiphany would become a major part of John’s life and convinced him that maybe the Constantine name wasn’t cursed.

These are just a few of the many characters appearing over the titles long run and idea that all of this is going to be washed away is inherently depressing.

The reasons many Hellblazer fans will not be picking up the new Constantine are myriad but mainly because you won’t be seeing any of this happening. Besides that though, one of the the main appeals of Hellblazer is the setting: a contemporary and very much real-world London, with this being Constantine’s home despite being born in Liverpool. Constantine has travelled far and wide- albeit against his will most of the time. It’s this setting which grounds the characters, and the events they find themselves in, within a reality not too far removed from the readers. The introduction of the smoking ban in London (and the rest of England) was written into Constantine’s London within a few months of its arrival in the real world. 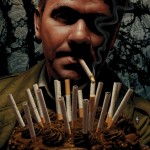 Unlike the vast majority of characters Constantine aged and there have been several stories based around celebrating his birthdays- although the aging process is somewhat abated by the demon blood present in his system, the result of one of several faustian pacts (a recurring hallmark of the series) Constantine makes with the demon Nergal.

From his genesis in Alan Moore’s groundbreaking Saga of the Swamp Thing (resulting in one of the most love/hate partnerships in the whole of comicdom) Hellblazer has had an unmatched line of acclaimed writers: Jamie Delano, Garth Ennis, Warren Ellis, Brian Azzarello, Mike Carey, Andy Diggle and Peter Milligan amongst others. The title had also featured a host of well-known artists both inside and on the cover, including Dave McKean, Glenn Fabry, Steve Dillon, Simon Bisley, Sean Phillips, Lee Bermejo and plenty more.

The reasons for Hellblazer’s cancellation are a matter for debate, with DC’s Dan Didio issuing a statement, which to fans did not make a great deal of sense and seemed to sidestep the fundamental changes to the character and setting altogether. Things got even messier when it was announced that Robert Venditti -the writer for the upcoming Constantine comic set to replace Hellblazer- was being taken off the title before he even began.

With the series coming to a close it gives new fans a chance to take advantage of DC’s reissuing of the whole back catalogue in chronological order (starting with a new edition of Original Sins) and hopefully even filling in the gaps, such as Paul Jenkins’s considerable run on the title which has never been collected.

Will you be picking up Constantine #1?

Andy Haigh started writing to counteract the brain atrophying effects of Retail Hell, now it's an addiction. Andy is an unrepentant sequential art absorbist and comics are one of his passions. Other interests include Film, Music, Science Fiction and Horror novels and quality TV like Game of Thrones. He can talk about these at great length if only someone would listen. He lives a somewhat hermit like life in The Shire, spends too much time on social media and is still waiting to go on an adventure.
You might also like
Alan MooreAndy DiggleChas