It was Manchester Comicon today and I decided to go as Kaylee from Firefly – I think that this costume could be done by anyone anywhere with minimal effort and without requiring too much skill. I’ve prepared a tutorial where I’ll deal with each element in sections to keep it nice and easy for anyone who wants to follow suit in future! 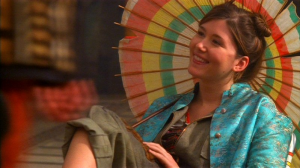 Firstly, the hair. Throughout most of the series, Kaylee has her hair straight, down and with a centre parting, but as I’m going for the look in the first episode, I needed buns! I’m not blessed with thick hair so I invested in some of these mini ‘hair donuts’ from Claire’s Accessories which are simple to use and give a bit of volume to the style. 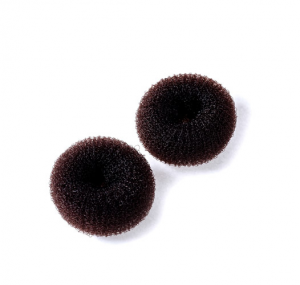 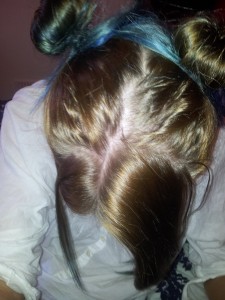 By the way, I’m certain that Kaylee would have had blue tips if she had readily available bleach and blue hair dye. Shhh…

As you can see, it makes for a very similar effect to the updo she’s sporting in this episode. As for makeup, I’ve kept this minimalistic, at best she has a touch of mascara on. 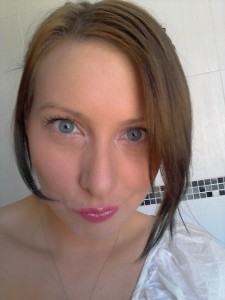 Next up, the jacket. She wears a blue silk kimono-style stunningly embroidered jacket and I must say, I really lucked out here. I’ve been scouring the internet for the last few years for one which was close enough to the article in this episode and one day I came across this on Ebay. Never been worn, someone’s granddaughter was helping her clear out her wardrobe and wanted it to go to a good home. It has certainly done that. 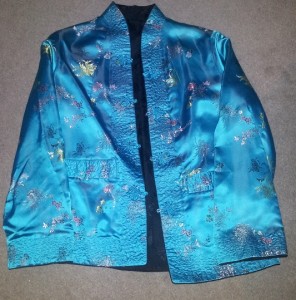 I had to compromise somewhat on the top. In the pilot she is wearing a white long-sleeved top with a temple scene on it. Luckily it isn’t really visible when the jumpsuit and jacket are on so I went with the style from the Firefly promo shoot instead. 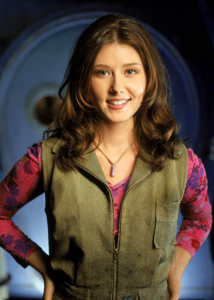 I actually managed to find a very similar top by Phase Eight by chance so until such a day as I find a top the same style as the one in the pilot (and I’m told by reliable sources that they are out there) this will have to do. 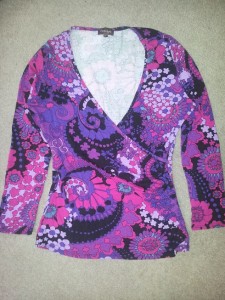 Now for the jumpsuit – I couldn’t find one with a zip that would also be tall enough for me, being 6ft tall, but mine has a velcro strap that sits open in the same manner so I’m quite happy with that. You can pick up an olive green jumpsuit at most Army Navy stores, the one I found had long sleeves which I loved, but for the sake of authenticity I have chopped the sleeves off and hemmed the edges; I also muddied up the jumpsuit a bit as it looked a bit too clean. The main detail is the important part with the jumpsuit; When Kaylee meets Shepherd she has two patches. One is a cute little teddy above the left knee, and the other is a little heart on the midrift section.

I got a cheap applique heart from Ebay and actually managed to find an exact replica of the bear patch on yet another Ebay store – the listing was under “Fuzzy Brown Teddy Bear Sew On Plush Applique Patch 6.5 Kaylee Firefly ”. 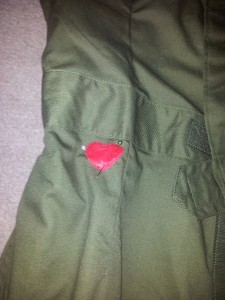 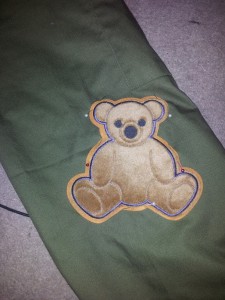 Onto that famous parasol of hers. 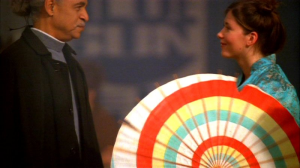 I bought a plain white paper umbrella with a bamboo frame from Brollies Galore and I used acyrlics picked up from the local hobbyist store to paint the design on the outside of the umbrella which shines through to the inside well enough not to have to do both sides. 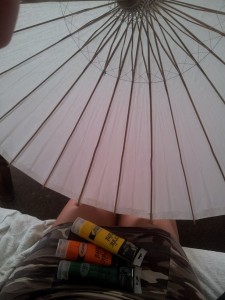 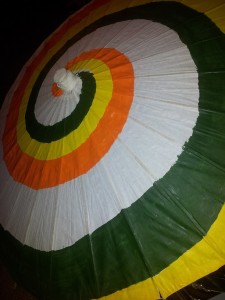 As you can see it isn’t perfect, but it does the trick!

Last, but certainly not least; below those rolled up jumpsuit bottoms Kaylee sports a rather charming pair of black and red sandals. 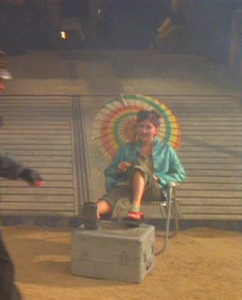 I searched for ages to find a pair like these but I seriously struggled, so settled for normal sandals instead (I’ll spare you a picture of my gnarly feet, I’m sure you can get the idea!)

What I love about this costume is that anyone on a cheap budget and even on short notice can pull it together, it’s instantly recognisable to the legions of fans out there, and yet it isn’t overdone at conventions so you aren’t likely to end up being one of twenty Kaylee’s that turn up; I only saw one other Kaylee today. If you enjoyed my little tutorial or have any questions please make use of the comment sections below. 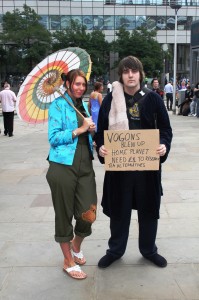