previous
The Cosplayer's Guide to Basement Nerds (Part 1/4)
random
next
Xbox One(984): Welcome to the PRISMdome

Improper Books has done it again. After teasing us with Porcelain, A gothic fairy tale for ages, it’s time for them to show us something they’ve been working at for a while – Knight and Dragon. We’ll keep you posted with news about it and, because we’re cool like that, we’ll try to get an interview with the authors. In the meanwhile, check out what they, themselves had to say about it.

Written by Matt Gibbs and illustrated by Bevis Musson, with colours by Nathan Ashworth, KNIGHT & DRAGON playfully subverts the story of a heroic Knight defeating a ferocious Dragon to rescue the fair Maiden, by offering variant paths and multiple outcomes to the classic fairy tale adventure.

Each narrative begins the same, with a beleaguered Knight riding his Horse into a seemingly deserted village, where the majority of the Villagers mistake him for a heroic warrior. Distracted by the beauty of the Maiden, before he really knows what he’s doing, the Knight agrees to fight a Dragon and, much to the Maiden’s evident dismay, the Village Chief offers the Knight her hand in marriage should he succeed. Learning too late from the Villagers that the Dragon is both huge and ferocious, the despondent Knight heads out to meet his fate, and at this point the stories begin to diverge…

From here, the Knight, Dragon and Maiden, along with the Horse, Farmhand and Village Chief, provide different paths through the unfolding narratives before reaching different endings.

‘It began as an idea to create a comic that allowed changes in the sequence and resolution of its scenes, enabling different stories to be told,’ said Matt, about Knight & Dragon. ‘This lends itself seamlessly to digital comics, but in a similar fashion to gamebooks, a print version is just as possible with a bit of additional heavy lifting, or page turning, on the part of the reader.’

‘It has also allowed Bevis and I to explore our mutual love of fairy tales, and I’m delighted that the branching script didn’t put him off. I’m a big fan of his work, especially the excellent Dead Queen Detectives, and it has been brilliant seeing each page come to life in his style, which is being perfectly complimented by Nathan’s colours.’

‘It’s always a pleasure to take things you love and approach them in a new way, so with Knight & Dragon I get to combine my love of fairy tales and comics and do something that is both familiar and surprising,’ said Bevis, about the project. ‘How could I not jump at the chance to draw a story with romance, drama, action, adventure and a whacking great dragon? In the end I even enjoyed drawing the horse, once I worked out he could wear a tablecloth.’

Designed with both print and digital in mind, Knight & Dragon is a picture book comic for all ages, due out in 2013. 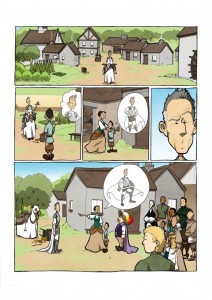 What's there to say about me? I love the sci-fi and fantasy genre when I read, but I am in no way limited to that alone. I do think Frank Herbert deserves a statue for his writing(if there is one, point me in that direction, please). I enjoy writing quite a lot, but I am also kinda lazy. If you want to make me happy give me books or Doctor Who collectibles. Or a real TARDIS, in which case I will love you forever.
You might also like
bevis mussonbreakingimproper books