Voice actor and Director Colleen Clinkenbeard is the first guest of honour confirmed for the LAGC in February 2014 – The single event, consisting of both the London Anime Con and the London Gaming Con.

Coleen has worked on over over 100 anime and video game titles. As a voice actor in anime, she is  best known for playing the English voices of Gohan in Dragonball Z Kai, Monkey D Luffy in One Piece, Erza Scarlett in Fairy Tail and Riza Hawkeye in Fullmetal Alchemist. She was also recently heard as the voice of Hana in Wolf Children. In video games, she has provided voices in Borderlands I and II  as Lilith, Patricia Tannis and Captain Scarlett.

As a director, Fullmetal Alchemist is what put her on the map; but she’s also worked on such projects as Black Butler, Panty and Stocking with Garterbelt, and Steins Gate. Colleen shall be attending signing sessions, a Q&A panel and more to be confirmed.

See below for more information on the event, taken from the latest press release: 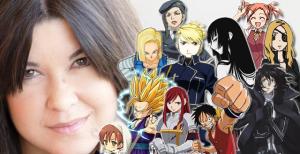 GAMING: Gaming shall feature the community lounge, a place to chillout by gamers for gamers with fun and wacky challenges. Meanwhile in the tournaments zone, there will be over a dozen big tournaments planned with prize-pools between £50 and £250 for each tournament at stake (exact amount depending on tournament and signups). Games will include Street Fighter IV, Blazblue, Marvel v Capcom 3, CoD, Halo 4, League of Legends, Smash, Minecraft, DDR and Mario Kart. With gaming exclusives to be announced, there will be plenty for gamers to check out.

COSPLAYING: Returning to this London Anime Con shall be the Cosplay Stars. Over a dozen of the best cosplayers from the UK and Europe, which include Stacey Rebecca, Kelly Jean and Tabitha, shall be bought together to guest at the event and showcase their amazing costumes. Attendees will also be invited to participate in contests which will include the Cosplay Masquerade with the winner getting a £50 cash-prize. The Otaku Fashion Show shall also take place on the Saturday, offering attendees and aspiring models to show off their unique style, be it lolita, goth, steampunk or anything different and special.

PARTYING & COMMUNITY – THE EVENT FOR YOU: We are the party convention, with an amazing party atmosphere. As part of this we have a massive party planned for each night going on to 1am each night as part of your ticket. There will also be a lot of fun entertaining events such as the Clan Battle Showdown, Baka No Gameshow, Karaoke and more.

This is just a small sample of what London Anime Con has on offer, with more activities to engage in than ever before on both days. The event advises to make sure to come for both Saturday and Sunday to catch all the events and to experience everything on offer. You can read a full preview of what the event has in store at HERE and you can view the guests HERE.

Updates – Make sure you stay up to date with all the latest news by following LAC on twitter @londonanimecon or joining the forums at http://www.animeleague.net/forum

I'm a 35 year old, self-confessed media junkie from London. I currently work as a tester in digital media (some say I get paid to watch telly) and also worked as a games tester in the past. I also spend a lot of my spare time watching films and playing video games. Thankfully I have a very understanding wife, who allows me time to do so.
You might also like
AnimeAnime LeagueBlazBlue