It’s no secret that I like Improper Books. It’s hard not to like something that announces its impropriety in such a shameless way. But for those of you that aren’t in the know, Improper Books is actually, in the words of its own creators, “a comic and graphic novel imprint focusing on creator owned stories that have a touch of the fairy tale, the Gothic or the macabre.”‘ The same Improper Books of the Porcelain: A Gothic Fairy Tale fame are now coming up with something new and different.

Here’s the short press release concerning the soon to be limited UK editions of their new comics: Knight&Dragon and Butterfly Gate. 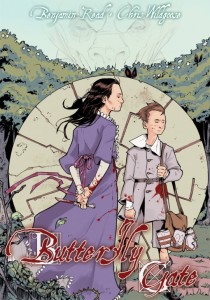 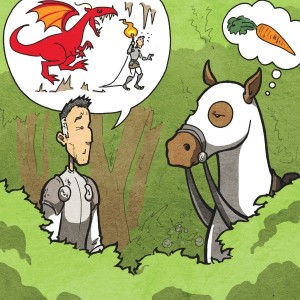 Both books will also be debuting at Thought Bubble in Leeds on November 23rd/24th 2013. Benjamin, Bevis, Chris, and Matt will be attending. In addition, Chris and Bevis will be sketching at the Improper Books table in New Dock Hall.

Butterfly Gate is a silent comic that follows the story of two siblings who, after throwing themselves headlong into another world, must face the brutal reality that lies beyond and find their place amidst an empire built after a revolution against the Gods.

Written for all ages, Knight & Dragon playfully subverts the story of a heroic Knight defeating a ferocious Dragon to rescue the fair Maiden, by offering variant paths and multiple outcomes to the classic fairy tale adventure.

If you love sampling before buying, you can actually preview a few pages of both books here. Don’t stray too far from Geek Pride, we’ll do our best to have a chat with the creators of the soon to be released comics, so be sure to hang around.

What's there to say about me? I love the sci-fi and fantasy genre when I read, but I am in no way limited to that alone. I do think Frank Herbert deserves a statue for his writing(if there is one, point me in that direction, please). I enjoy writing quite a lot, but I am also kinda lazy. If you want to make me happy give me books or Doctor Who collectibles. Or a real TARDIS, in which case I will love you forever.
You might also like
benjamin readbevis mussonbutterfly gate