previous
Tell us your fantasy. We will make it real.
random
next
Lara Croft is Terrible at her Job

Looking Back At The Saint’s Row Series

I’ve always been a massive fan of open-world (aka “sandbox) games, mainly because of the freedom they provide to do what you like, be it partake in missions, or attempt ridiculous bike jumps and side quests. The first title I remember playing in this manner was Grand Theft Auto III, followed by such titles as Spider-man 2, Prototype… the list goes on.

Firmly embedded in my list of favourite sandbox titles is the Saint’s Row series, which started with 2006’s initial release which appeared to take inspiration from GTA: San Andreas – a damn fine choice too I might add. Whereas the first two games in the series are played fairly straight, the third really pushed the  boundaries  in terms of bonkers content. But I’ll get to that in a moment.

What follows is a retrospective look at this great series, with my reasons for why you should play the games if you haven’t already. 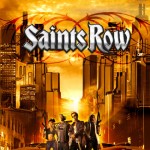 The first game – an Xbox 360 exclusive developed by Volition, Inc. and published by THQ – centered around an unnamed protagonist who is caught up in a gang war and saved by the two leaders of the 3rd Street Saints, a street gang based in the fictional city of Stillwater (based on elements of Detroit and Chicago). The gang is tasked with ending the feud, and the player is offered a position in the gang – hence the game’s title.

The game mechanics are quite similar to Grand Theft Auto, with main missions and side quests alike, along with a multitude of customisation options for the player and vehicles in the game. This was emulated pretty well from the GTA series, which drew some criticism saying that the game was unoriginal as a result.

What set Saint’s Row apart from it’s competitors was the online multiplayer mode which also involved a gang element and co-op play… there are also a few feature additions and tweaks like an improved map system, and “homies” – NPCs that you could earn and would accompany you on missions making it more dynamic and interesting.

The online aspects of the game revolutionised the genre, and although by today’s standards the options were pretty basic, they’d never been attempted before in a sandbox title. Now the system may have been fairly run-of-the-mill, but it’s a solid setup with a decent selection of game modes to cover most player’s preferences. 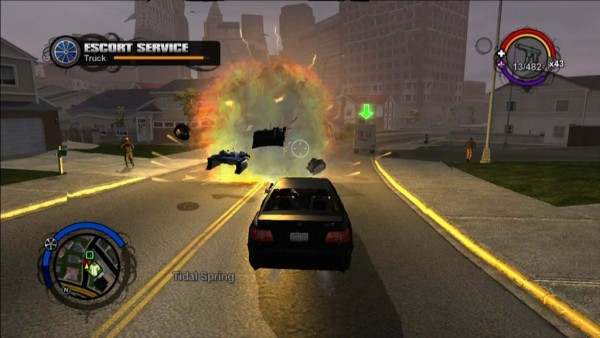 A great title, which met with some really good ratings from the industry (when the demo hit the Xbox Live Marketplace, it was downloaded more than 350,000 times in the first week setting the record at the time), it’s only failings were the almost carbon-copied elements from the Grand Theft Auto series, and a few graphical glitches like tearing etc. The game still stands up to scrutiny today, and is well worth investing in as you can find it in the Platinum selection, or pretty cheap in any preowned store too. 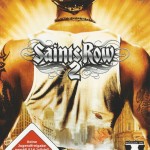 Released in 2008 for Xbox 360 & Playstation 3, then ported to PC in 2009, Saint’s Row 2 is set 5 years after it’s predecessor and continues the story of the same nameless protagonist. Now the leader of the 3rd Street Saints, the aim of the game is to quell the uprising of three other gangs that have sprung up in the 5 year period since the first title ended. I’ll try not to discuss the story too much for fear of spoiling anything for you all.

This time around, Saint’s Row 2 drew comparisons with GTA IV… but thankfully once you play the game for a bit you realise that the title takes a step away from the Scorcese-esque feel of Rockstar’s game. Saint’s Row 2’s developers seem to have opted for the fun factor rather than it’s over serious rival.

For example, one of the mini games involves riding around on a quad that’s on fire, and the aim of the mode is to run into people and other vehicles with an aim to extend your timer and facilitate as much carnage as humanly possible. This is hilarious, and reminds of playing Burnout Takedown‘s challenge mode where you have to cause as much havoc as you can. 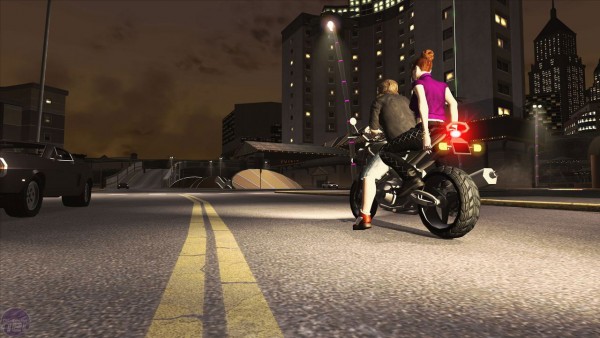 This sequel introduced water and air-based vehicles, and some nice beefed-up customisation options which even included the option to change the protagonist’s accent. More downloadable content again included new customisation options, but this time around the DLC also incorporated new weaponry, vehicles, game modes and multiplayer maps – altogether a more comprehensive package and much more worth forking out for the extras than before.

THQ’s second outing in the series did receive a bit more criticism in terms of technical issues with the game – predominantly with the PC version. Building popups, graphical bugs causing the player to get stuck in objects, framerate issues and silly bugs with enemy AI all  plagued  the game’s release, yet the overall  consensus  was good on the Xbox 360 and PS3.

Yet again it’s definitely worth picking up Saint’s Row 2, as once again the title is available for a bargain price as it’s included with the platinum Playstation collection. 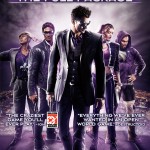 Lastly, but by no means least we come to the most recent iteration of the Saint’s Row series – this was recently available free as part of  Playstation Plus too, so hopefully you’ve managed to pick it up.

The first time I laid eyes on this game, it was at the Eurogamer Expo in 2011… and the first bit of exposure I had meant that I NEEDED to own it. Let me just describe my first impressions before I even touched the controller:

I was watching a guy play the game, and his character was a very muscular male wearing a pink string vest and a pink miniskirt… on his head he had a gorilla mask, and he was brandishing a 4 foot purple sex toy aptly dubbed “The Penetrator”. As I stood there, mouth agape, he was taking The Penetrator, and beating cars with it until they exploded, then promptly lasing targets for a sattelite-controlled strike on certain areas of the map.

Thanks to this experience the two words that have forever stuck in my mind when I describe the game are “batshit insane”. It probably didn’t help that while I was wandering around  the Expo, I was being followed by this weird guy – I later found out he was promoting the game. 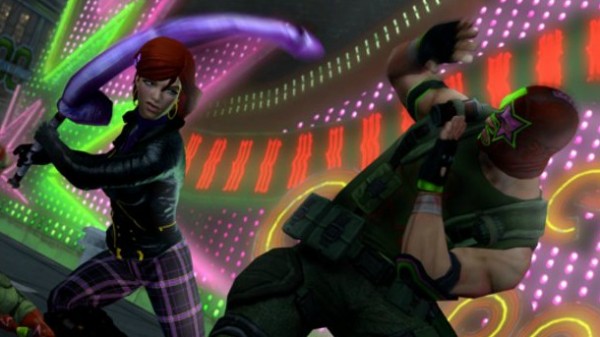 The plot of the game again follows the same protagonist leader of the 3rd Street Saints. This time set in the fictional city of Steelport, with the ongoing gang war between the three gangs is intensifying and as a result STAG (Special Tactical Anti-Gang) are called in to deal with the issue – this is a special paramilitary police force commissioned to deal with the ensuing violence.

The game’s technical updates helped to keep the quality of the title high, with some decent voice actors incorporated too which included appearances from Burt Reynolds, Hulk Hogan and Sasha Grey.

If you’re familiar with that last name on the list (a lady of questionable occupation), then it’ll give you a hint as to the game’s general tone and mindset. Saint’s Row: The Third is the kind of game that will appeal if you have a more twisted sense of humour – the lewd and often juvenile jokes and themes are rife throughout the game, but there’s a massive emphasis on having a laugh while you play. This was initially hinted at in Saint’s Row 2 with the ATV missions, which make a welcome return here too. 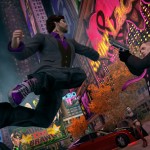 To emphasize the fun factor that bit more, lets just mention that there’s a weapon in the game that allows you to fire a mind-controlling octopus at your target, enabling you to cause mischief and mayhem… you can also fly hover jets, control retro pixellated tanks, and flying motorcycles.

One of the few things that lets the game down is the  lackluster ending to the campaign, however even once you’ve completed the game there’s so much to do, you’ll keep going back for more – almost everything within the game is incentivised, and it’s so fun that you’ll often just start up the game deliberately to just cause destruction and chaos for a bit as a stress reliever.

I’ve really enjoyed playing Saint’s Row: The Third, and I still break it out here and then just to have some immature fun and frolics. As I previously mentioned the title was available for free on Playstation Plus, but in terms of costs to obtain elsewhere Amazon currently list the game at £17.29 on Xbox 360 and £24.97 on PS3… bearing in mind how long it’ll take you to complete, along with the replay value, it’s definitely a worthy addition to your collection.

The Saint’s Row series has had it’s ups and downs, initially starting out as a straight Grand Theft Auto clone, it developed over time and blossomed into the fun and joyously insane games you see today – each title has it’s merits and shortcomings, often losing out to Rockstar’s powerhouse series in terms of story and attention to detail… but when it comes to unadulterrated balls-out amusement, then you can’t go wrong with these titles. With two thirds of the series set at a bargain price, and the third more than likely due to follow suit once Saint’s Row IV hits, I can’t recommend them enough. 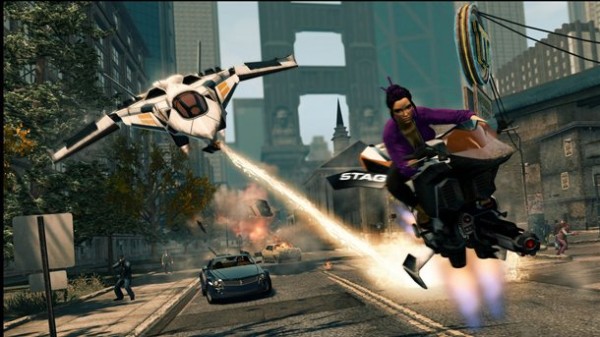 Admittedly the games aren’t for everyone – if you like your sandbox games more Al Pacino than Adam Sandler, then stick to the Grand Theft Auto series. The way Saints Row IV is shaping up, it’s set to follow in it’s younger siblings’ footsteps.

Movie and videogame geek, basketball player, guitarist, waffle connoisseur & expert in being a slacking bastard. You'll find me gaming on PS4 as "SpasmicPuppy" most of the time... I'm addicted to Destiny.
You might also like
breakingBurt ReynoldsFun