A bit delayed but here you go! 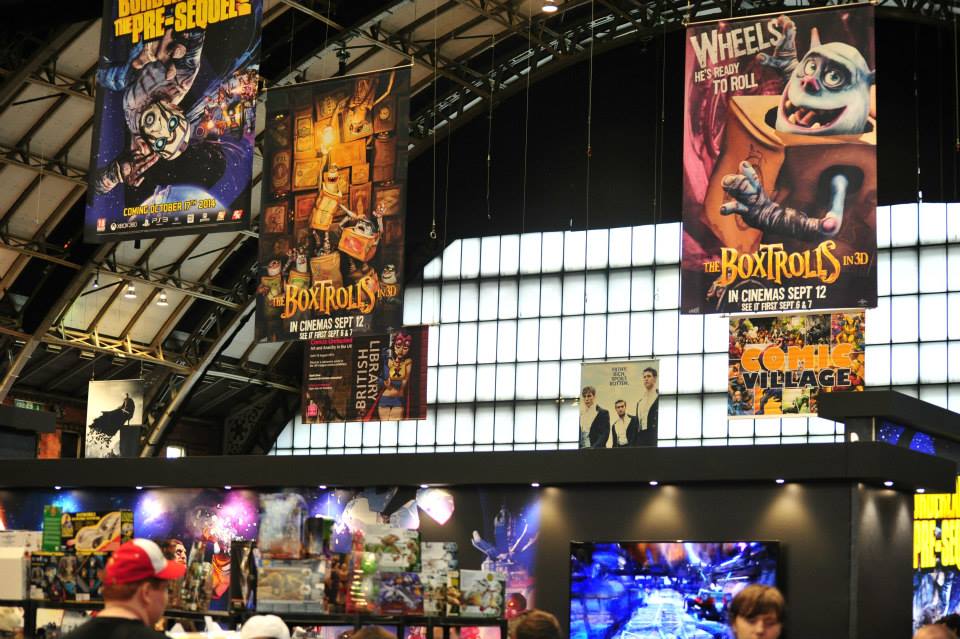 It has been a few days since the Con in Manchester and only now do I feel like I’m returning back to a bit of normality.

With a surge of geek energy pulsing through my veins, since my arrival in Manchester last week, I felt like I couldn’t be more in my zen. But on entering the hallowed halls of Manchester MCM, my geek sense exploded, as if I had bitten by a radioactive spider and all that was geek was surging through body! Ge..eek… powers…growing… must..not..re..sist! After having a taster of what conventions had to offer in Belfast, I had high anticipations for M-Con; and man I wasn’t disappointed.

Luckily for me I had managed to score a Press Pass, from Geek Pride, which some what heightened my experience; no pesky lines for me. “Take that johnny Con goer, I’m press!”  I have to admit I was glad of this as the weather was not kind and I felt bad walking past the endless line of hard-core con fans being soaked to the skin. I felt I should have handed over the small card, that gave me this power to queue jump, to someone who had earned it more. But the evil villain inside me was rampant and I wanted to see everything first! This being said, everyone was in high spirits and were not fazed by the rain. And those who were smart and booked early bird tickets, didn’t have to stand in it for long. 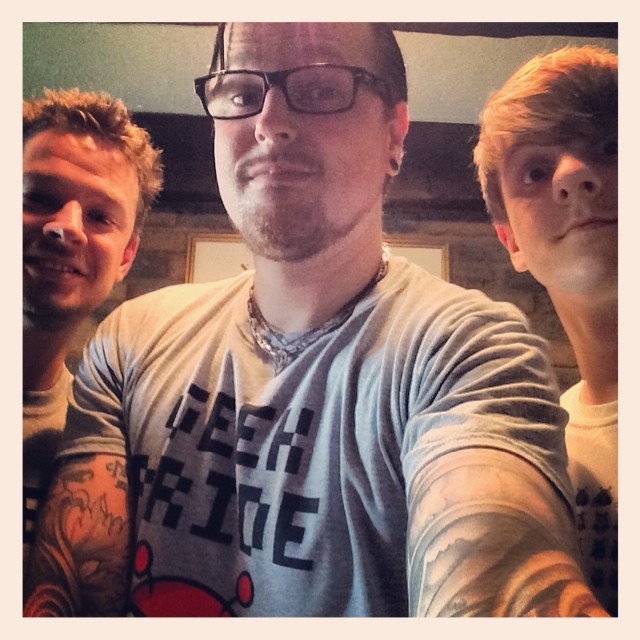 Myself, Kyle and Matt, our geek overlord leader, entered the arena as a band of brothers returning home from battle to be greeted by all that we love. It was only early and the event was well under way with plenty of impressive cosplayerss already making appearances. We made a quick lap around the event areas to get our bearings and then started to set up a temporary rebel base situated close to the Star Wars display area; It seemed fitting. With a brief discussion of what our plans were for the day and then the cameras were up and rolling. This being my first time in front of the camera I did my best not to seem like a geek noob. Unfortunately I failed. I have a face for radio and a voice for silent cinema.

As we had the video camera up and running, we decided we’d get some quick interviews with people to see how they were enjoying the con so far and talk to some of the many cosplayers roaming the grounds. We were spotted by a couple of Jawas who seemed to think our camera tripod was a droid and were looking to offer us a trade. Unfortunately for them they had no real droids to trade with and before they could make us any other offers they scurried off as they spotted some Imperial troops roaming our sector. 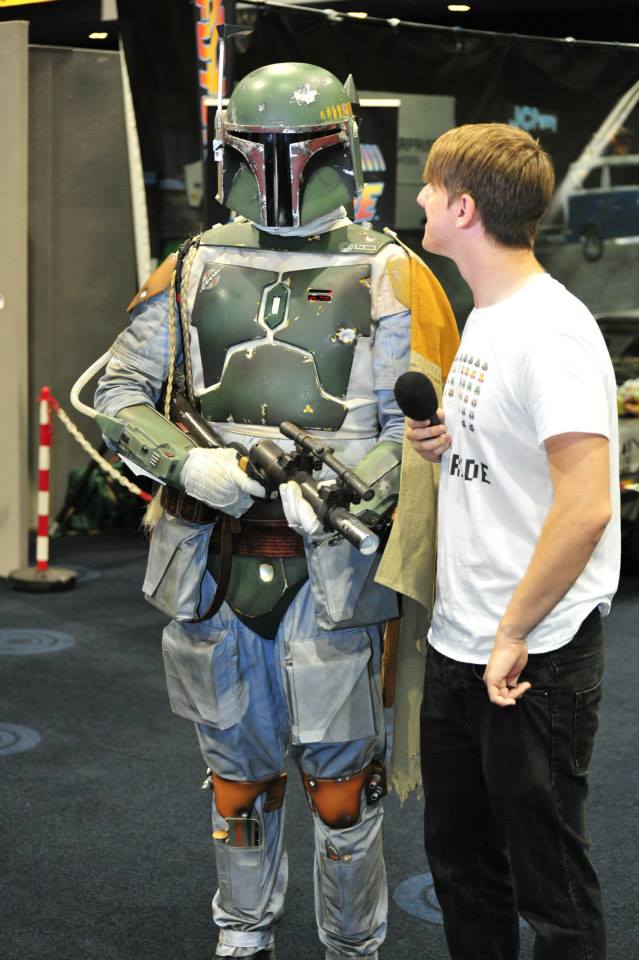 Next we managed to snag a few words…..well……nods in this case, from everyone’s favourite bounty hunter, Boba Fett. Although he is a man of few words we managed to get some reactions from him with some of our questions. At one point we thought we may get a blaster to the face, as mentioning the Sarlaccc pit appeared to be a touchy subject. But we quickly moved onto a subject that he seemed much happier with……Tatooine slave girls.

Time to go mobile and we packed up or kit and were on the move. The basic layout was similar to that of B-con, but with a larger arena and a couple of overflow areas put to good use it didn’t feel claustrophobic. In comparison to Belfast it was the same but bigger with more of everything. More room, more people, more gadgets, more comics, more characters, more cosplays and more fun!

We managed to find a well-lit spot between one of the main overflow areas and the amphitheatre where the panels were being held. This proved a handy position as it allowed us to see cosplayers going to and from the events going on inside the theater, so we could pick them out for some photography and interviews. We sat in on some of the panels including a particularly funny one involving Warwick Davis who I’ll always remember for his part in the film Willow, not to mention Star Wars and An Idiot Abroad. A fan from the audience asked him “Is Karl Pilkington really that miserable in real life?” to which his answer was “I should get that put on a t-shirt….and yes he is”. 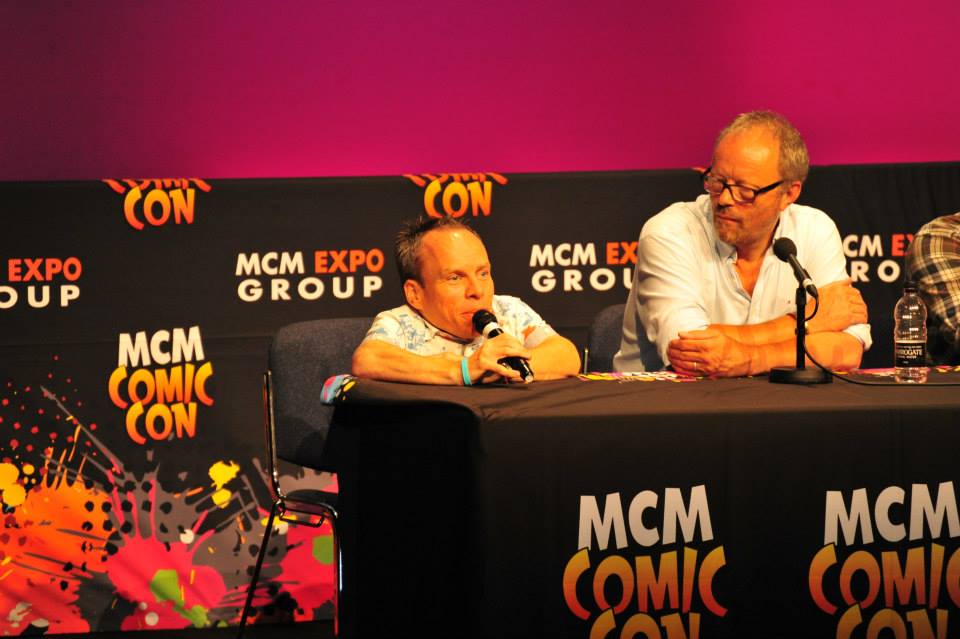 During another period of us tracking down cosplayers and con goers for photos and interviews including The Predator, Iron Patriot, more of The Fete and his entourage, Harley Quinn and Jareth the Goblin King, came one of the most memorable times of the entire convention let alone my lifetime.  We managed to get a face to face interview with James Cosmo, Jeor Mormont the Commander of the Night’s Watch. As one of the biggest names at the convention I thought he would not have time for us measly peons and would have better things to do, but he was a complete gentleman and was more than happy to do the interview. We had hit the big time!!! He told us of a time he was clonked on the head during a choreographed sword fight in GOT and about his time working with Mel Gibson on Braveheart. But his most memorable comments were the ones to which he encouraged any new and aspiring actors or directors to go for it as the film industry in the UK is booming.  He was an absolute pleasure to speak to. 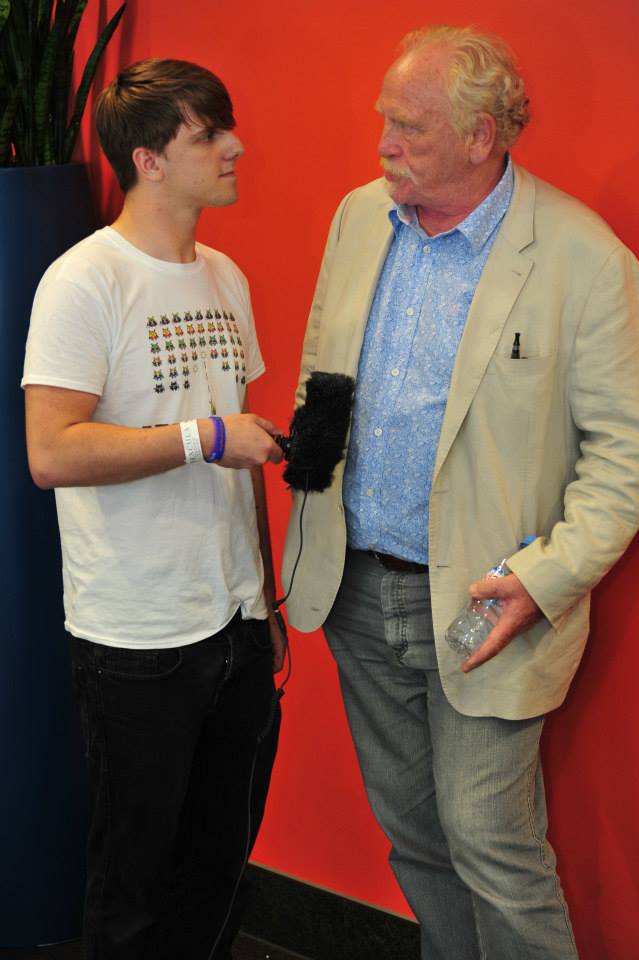 After a truly epic interview we had to move on as the Cosplay Masquerade was about to begin and we wanted to snag front row seats. This was another highlight as cosplayers bravely made their way out onto a stage in front of hundreds to show off their costume creations and stage presence for the chance to qualify for the next round of the EuroCosplay competition.

Each and every person who took part put in a great effort to their costumes and performances, but there were two in particular that really stood out for me who I had hoped to see on stage from seeing them around the arena. One of these was a two manned Star Wars AT-AT walker complete with moving head, gun turrets, cockpit pilots and opening side bay doors. The other took me back to my childhood of playing WarHammer 40K to which I had recently come accustomed to again. It was a full 7 foot Crimson Fist Space Marine. I could not believe the amount of awesome that had gone into this costume. It was jaw droppingly epic and immediately made me want to hoke out my armies of Squats (I dont want to talk about it) and Eldar to wage some war in the warp. I was even more surprised that this guy of a young enough age managed to create this iconic armor in merely six months. 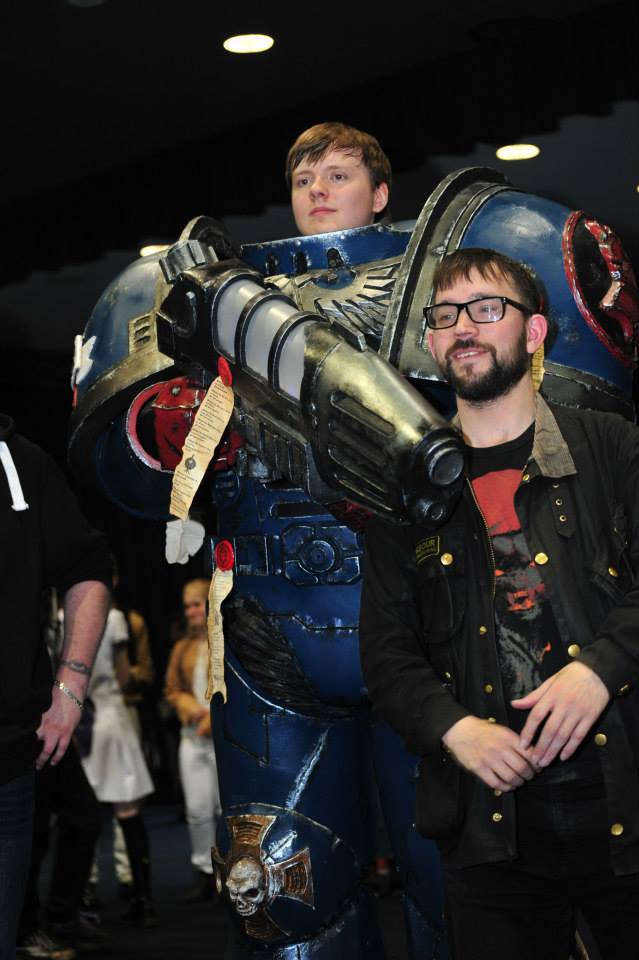 At the end of the long weekend my appreciation for conventions such as this had massively increased and from talking to people at it about the likes of LFCC and SDCC I will certainly be making a massive effort to attend these events on a regular basis. I have even put some thought into doing my own cosplay. Ultimately the weekend was a massive success and it reached all my expectations and then some. These conventions are made by the people who attend them and I felt a part of something bigger when I was there. For someone who is relatively new to this world, I was welcomed in with open arms and made to feel like one of their own. I am a con noob no more!

Check out some more of my Pictures below

You can also check out some of my Brothers, oh omnipotent Geek Pride Lord,  HERE

Interviews and Video to come shortly

From N.Ireland but now living in Manchester, England; Matt is the founder and CEO of Geek Pride. Interests: Photography, Music, Art, poetry, Military History, Model making and painting and of course gaming (table top and computer)
You might also like
Ap Gamescomic conventioncosplay