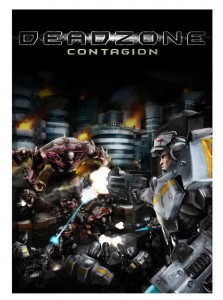 For a week, a mysterious clock was ticking down at http://www.deadzonethegame.com/ subtly suggesting the announcement of something important. Combined with this were mysterious tweets from the account known as “Exp/Ret Six-Alpha” apparently telling the story of some sort of last stand or invasion. At 1:30pm GMT on the 26th April 2013 the clock hit zero and Mantic Games formally announced their new kickstarter project: a 28mm sci-fi skirmish game based in their Warpath universe.

The game comprises of 4 factions: the Enforcers (humans), the Plague (think space zombies) , the ERbs (anarchists) and Marauders (space Orcs). It’s designed to be a streamlined and simple rule system to allow the players to focus on the tactics of the game. As well as the stunning miniatures, Mantic are throwing in a new plastic terrain system, so you can build buildings and corridors to fought over.

The kickstarter project runs until Sunday the 2nd June 2013 with a target of $50,000. If Mantic’s previous efforts on Kickstarter are to go by, the project is likely to smash that target, with many stretch goals to follow.

Mantic are no strangers to Kickstarter projects, having had their own Dreadball and Kings of War successfully funded on the site, as well as publishing Alessio Cavatore’s chess-like game, Loka. Looks like this project is certainly one to watch for any fans of Sci Fi wargaming.

You can find the project here: http://www.kickstarter.com/projects/1744629938/deadzone-the-sci-fi-miniatures-board-game