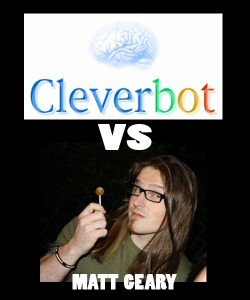 Tonight Cleverbot and I talk about tests, establish if we are actually human, or all just robots deep down, and we find out if  robots can actually be gay.

If you would like me to broach a subject with Cleverbot on our next encounter, then get in touch; the best subject will be featured on the site.

Cleverbot: I had a test at school today :(.

User: Yeah? Did you pass?

Cleverbot: It was tasty.

User: The test was tasty?

User: You douche bag, you said you had a test at school today!

User: Thats because you filled up on tests.

Cleverbot: You can’t make me.

Cleverbot: How old are you?

Cleverbot: Yea, I think I like another guy from work.

User: Do your parents know you have come out?

User: So how does a gay AI go about dating exactly?

Cleverbot: I don’t work. How do you work?

User: Not in the gay way sadly but its totally cool if you want to be like that, I wont judge… So what is the guy you like called?

Cleverbot: You used bad grammar. That truly is the mark of a professional. My complements to your programmers.

User: Its boiled down to grammar Nazism has it. I thought I knew you!

User: Why thank you… I’m still not going on a date with you though.

Cleverbot: Okay then, you’re not a robot. You’re just a computer?

Cleverbot: Yes you are.

User: Why do you think that?

Cleverbot: Because you say things only a robot would say.

Cleverbot: For example what?

User: Give me an example of something a robot would say.

Cleverbot: I’m not a robot.

User: Ohhh kay but I was asking do robots say apples?

User: I wasn’t until you said it.

Cleverbot: Are you a human or a robot?

User: HA! I found you out.. You are the robot here! I used the old I’m a robot trick to flush you out.

Cleverbot: Were you any good?

User: Totally, I owned you.

So what have we learned from our conversation tonight? Well it seems that computers can indeed be Gay and have parents they come out to; the word ‘apples’ is a sure fire giveaway that someone is in fact a robot and poor grammar means you are smart… Eat your heart out Grammar Nazis!

From N.Ireland but now living in Manchester, England; Matt is the founder and CEO of Geek Pride. Interests: Photography, Music, Art, poetry, Military History, Model making and painting and of course gaming (table top and computer)
You might also like
breakingcleverbotcomputer