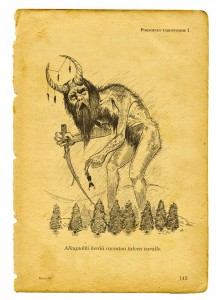 Krampus is a European mythical folk character – popular in Austria, the Czech Republic, Bavaria, Hungary and the Netherlands.

He has cloven hooves and has demonic horns growing out of his skull. He has an extremely long prehensile tongue to ensnare children like the smoker from Left 4 Dead. Oh, and if your kid resists or gets in his way, he’ll smack it with a bundle of birch twigs or a whip. 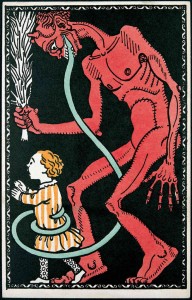 He acts as Santa’s evil equivalent – where jolly old Saint Nick just gives you fossilised trees when you’ve been bad, this wretched creature grabs the naughty little bastards and drags them, kicking and screaming, back to Hell in his sack. 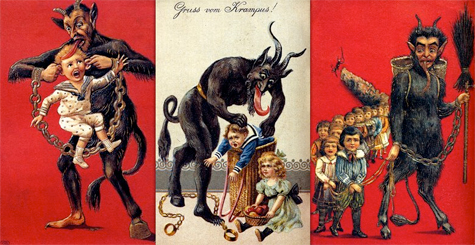 Sometimes the naughty kid gets lucky, though, as in some versions, he merely eats or drowns them.

Krampusnacht falls on the 5th of December – the eve of the Feast of Saint Nicholas, where he and Krampus essentially saunter around the local businesses and homes and, I imagine, terrify children until there is literally no poo left within their tiny bodies. The adults naturally turned this into a festival of its own and dress up as the damned thing en masse. 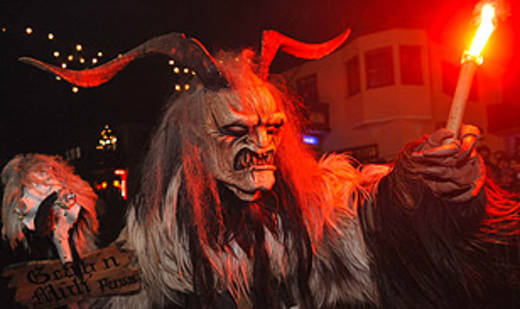 Krampus would go on to win the Eurovision song contest

There’s a tradition of postcards featuring Krampus, typically traumatising children or leching after buxom women, which, to be fair, is exactly what I would do if I were in his position. 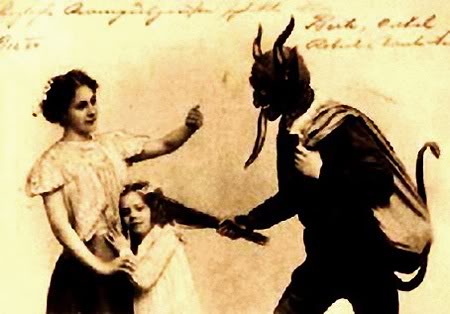 His history with the church and the Austrofascist state has been generally repressive; both the Roman Catholic Church and the Dollfuss regime tried to prevent people from observing the traditions associated with him. They couldn’t keep a good folk-monster down, though, and he’s steadily gained in popularity ever since. His google trends have him at the highest he’s ever been. His more recent opposition are typically concerned parents and psychiatrists who think he’s too scary and violent and all those things that everybody actually likes because it’s exciting.

A film to check out if any of this interests you is Rare Exports (2010, Jalmari Helander):

I was born very early in my life and now live on a diet of scorn and sarcasm. Follow me @ryezuul
You might also like
christmasdemonfather christmas