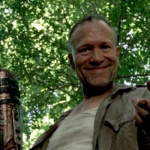 Yes folks, Walking Dead fan favourite Michael Rooker has been cast in James Gunn’s Guardians Of the Galaxy movie as the blue mohawked hunter Yondu, and not Rocket Racoon as previously rumoured.

Fresh from finishing his run in The Walking Dead (with gusto I might add- it was awesome!) Rooker has been given the role of Yondu Udonta, a hunter in a Zatoan tribe on Centauri IV. I’m not familiar with any of the Guardians if I’m honest, but in looking up the character in the Marvel Wiki I’m rather interested in how he’ll be portrayed.

Yondu is a mystic with empathetic connections to lifeforms, most prominantly feral animals (he’s the perfect hunter) and other plant organisms- this helps him track prey, detect the presence of foreign lifeforms or entities and helps to form a symbiotic relationship with nature in general… though most effective on his home planet.

With Guardians Of The Galaxy being our first introduction to the characters, I’m hoping we get to see Yondu’s backstory as it’s a pretty interesting read; but just in case it is included, I’ll give a little SPOILER ALERT and say I’ll post a brief snippet of his Wiki page below the following image.

[quote]While performing his geophysical survey, Astro came across Yondu, who was in the midst of his ritual of manhood ordeal. Although Yondu tried to avoid contact with the outworlder, the planet-wide attack by the extraterrestrial Badoon brought the two men together. The Badoon massacred the entire settlement and began circling the planet, trying to eradicate the scattered tribes of native Centaurians. With the first evidence of hostilities, Astro took Yondu aboard his survey ship and set out for the nearest known planet in the star system.”[/quote]

I like the sound of the character, and seeing how Rooker has developed as an actor over the years I’m sure he’s going to do it justice, and he’s worked very will with James Gunn in the past too (Slither was great!) plus he’ll look badass with a massive red mohawk- though judging by the concept art below, I’m not sure that’ll be included… I think that’s Yondu on the far left.

Disney and Marvel plan on unleashing Guardians Of The Galaxy on the world on August 1st 2014.

Movie and videogame geek, basketball player, guitarist, waffle connoisseur & expert in being a slacking bastard. You'll find me gaming on PS4 as "SpasmicPuppy" most of the time... I'm addicted to Destiny.
You might also like
breakingCastingcomic