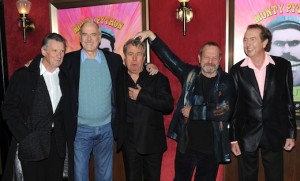 Today in London the five surviving members of Monty Python gave the world all the details on their reunion plans.

The biggest news is that rather than a tour the reunion will consist of a one-off show at the O2 Arena in London on July 1st, though the group has refused to rule out the possibility of further shows later. A press release ahead of the conference promised that the audience of this exclusive show would see “some of Monty Python’s greatest hits, with modern, topical Pythonesque twists”.

John Cleese, though, made sure to point out that there would also be “some new material”.

Other noteworthy revelations about the show were that former Strictly Come Dancing judge Arlene Phillips would be assisting with the choreography of what Eric Idle promised to be a “big show” like a “huge musical”. It was also revealed that the show would be recorded for a future DVD release. Idle also added that the late Graham Chapman, the sixth member of the influential comedy troupe who died in 1989, “won’t be absent” from the show.

The last time Monty Python performed a stage show was at the Hollywood Bowl in 1980.

Prolific writer attempting to slowly take over the internet through various explorations of cinema, heavy music and everything in between.
You might also like
breakingEric IdleGraham Chapman