I’ve always kind of considered myself a geek. When I was in school I was one of the ‘odd’ kids, loving Lord of the Rings a little too much and thinking that one day I might grow up to be a superhero –that’s not happened as of yet, just in case you were wondering– but I had never really hung out with other geeky people. I worked out how to blend in and so that’s what I did. It was only in this past year that I actually met some true geeks and, wow, it was liberating.

I have my sister to thank for this introduction into the geeky world, for an insight into a world that I had always felt I belonged in. Rich and Rob have become my geek heroes, probably because they’re the only geeks I’ve really met and ‘got’. Rich and Rob both work in illustration, Rob having made my profile picture (as seen below), something I’m entirely jealous of as I can’t even draw a stickman which resembles a man made of sticks. 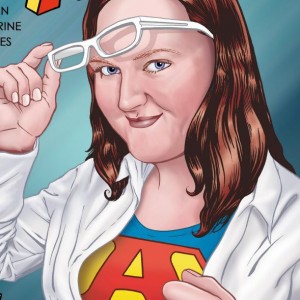 Their house is like heaven for geeky-but-still-functioning-as-a-normal-person-in-society people. Their corridor walls are covered with postcard-sized pictures of art, some drawn by Rob himself and others taken from films or comics. Their living room would give any geek goose pimples. Glass cabinets line two of the walls, full of merchandise and figurines from different films and TV shows including Ghostbusters, Star Trek, Batman and Back to the Future, and a shelving unit covers another wall with many more wonders. There is so much to look at and take in- you feel like you’re in a museum, but rather than one where you’re wondering when it’s acceptable to leave, you’re wondering how long it’s acceptable to stay.

The walls have pictures of art drawn by Rich including a Back to the Future inspired piece which I can’t quite get over as it really captures your imagination. There’s also a signed poster of the Fantastic Four film on another wall. I ask how Rob got it and he just says “someone gave it to me”. If only everyone could be given interesting merchandise rather than free pens or the like. They make great company too, able to navigate a various amount of topics whilst having a great sense of geeky humour.

When you’re done marvelling at their collection you can move on to watch TV or play Xbox which is projected onto a full wall. It’s much more interesting to play Street Fighter when the character is nearly the same size as the player. Although, as a self confessed button basher on fighting games, you do find yourself getting a little too carried away and the controller is nearly sitting on your nose as you put all your effort in attempting to find various successful button bashing patterns to try and win. I am ashamed to say that during the last Street Fighter competition, I didn’t win at all.

I guess this blog had no real purpose, I’m not telling you about a new game or reviewing a film. It was just a ramble about how I met some cool people and visited their awesome abode. It was an experience that if more ‘normal’ people had, it would shatter their expectations of a geek place and leave them with envy and aspiration of becoming a geek themselves.

I'm a movie lover of all genres, particularly comic book films, as well as some television shows such as Community. I enjoy fiction writing and blog writing and I sometimes dabble in reviews.
You might also like
blogfriendsGaming