Last Friday we told you that the license agreement between Tommo Inc. and SNK  Playmore USA Corp had been terminated. Well, Tommo have now responded to SNK’s press release, regarding this and say that the termination is unjustified as no terms of the agreement have been breached by them. Earlier this year, the agreement was extended until 2016 and Tommo expects this to be honoured by all parties.  They state that they intend to continue to produce and sell the Neo Geo X and all related products.

We still don’t know the reason SNK decided to terminate the agreement and they haven’t retracted the press release as yet. I’ll certainly be keeping an ear out for further developments on this story and I’ll let you know: 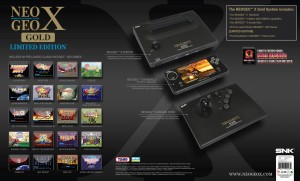 Los Angeles, Calif. – October 7, 2013 – Tommo, Inc., today responded to the press release that appeared on the SNK PLAYMORE USA Corp website last week. Tommo, Inc. denies that any breach of contract exists in their agreement with SNK PLAYMORE USA Corp and are continuing to support and market the popular NEOGEO X GOLDentertainment system, its accessories, and games. Due to the popularity of the system, Tommo and SNK extended the agreement earlier this year until 2016. Tommo fully expects this agreement to be honored by all parties. To date, Tommo has performed all of its obligations under its license agreement with SNK and is disappointed by SNK’s sudden and unjustified termination of the agreement. Tommo has demanded that SNK retract its press release and any attempts to terminate the license agreement.

“Tommo is still taking care of all customer service and product warranties in North America as are our master distribution partners, Success in Asia and Blaze in Europe,” said Jonathan Wan, CEO of Tommo, Inc.. “We’re continuing to sell NEOGEO X products, including the NEOGEO X GOLD System, Arcade Stick, MEGA PACK Volume 1 and Classics Volumes 1-5. The license agreement which allows Tommo to sell and market these products remains in effect.”

Tommo Inc. would like to thank the thousands of NEOGEO X fans who have shown amazing support for NEOGEO X in the last week and want them to know we will continue to support them, their NEOGEO X GOLD systems and products.

I'm a 35 year old, self-confessed media junkie from London. I currently work as a tester in digital media (some say I get paid to watch telly) and also worked as a games tester in the past. I also spend a lot of my spare time watching films and playing video games. Thankfully I have a very understanding wife, who allows me time to do so.
You might also like
breakingneo geo xNeo Geo X discontinued